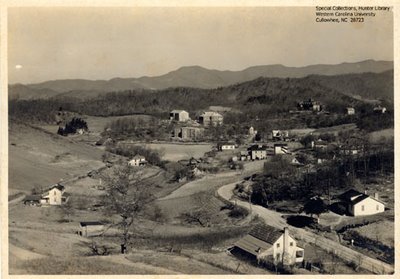 Western Carolina University is developing a Cherokee Heritage Trail. Took guided walk on the proposed trail this afternoon. Turns out that most everything WCU has built in the past 80 years has disrupted some fairly significant archaeological sites. Killian Building sits right where a large mound once stood...where Daniel Rogers had grown his corn for 60 years. Excavations suggest permanent settlement for the past 7000 years, with some 10,000 year-old spearpoints appearing here and there. Scattered about, for a mile or so, were settlements: consisting of adjacent winter and summer homes. Winter homes were small round structures made of wattle and daub. Summer homes were long open sided, covered sheds. The better part of the valley, as far as you could see, had been covered with corn fields. And this for several centuries before the first Europeans arrived. River cane along Cullowhee Creek and the Tuckasegee River was used for baskets, mats, trays and screens. Rock pile fish weirs in the rivers funnelled the fish to where they could be caught. Rutherford and his army of 2400 came from the Piedmont in 1775 and burned every village they met. And so it goes with outside developers ever since. You know the rest. Photograph is WCU campus, ca. 1924, seen from Dix Gap.
Posted by GULAHIYI at 6:07 PM