I recall picking up a dusty Popular Science magazine from the early 1950s. It predicted that by the year 1985 the post office would be using guided missiles to deliver the mail. Attempts to forecast the future can be ridiculous failures. On the other hand, Dick Tracy was carrying a cell phone for decades before the rest of us, so prognostication might be of some value.

As oil starts to go bye-bye, and then some time after America's war with China to secure the dwindling reserves of it, we will enter the post-petroleum era. Things will be a lot different, that’s a safe bet. But perhaps biotechnology will allow us to make the most of our old friend, photosynthesis. Constructing McMansions won’t be as viable as it is today, so we may turn to growing our houses instead of building them.

Plant products have been used for shelter with great success. My own house is framed with lumber and insulated with cellulose fibers. A nearby lodge is sided with tree bark and some more modest huts I know of keep the rain out with thatch roofs. I really don’t think it’s a stretch for biological engineers to develop seeds that would develop in such a way to provide load bearing structure and protection from the elements.

Just imagine. Pick a nice house site. Excavation simply involves digging a hole in the ground for planting the house seed. Add water, sunshine and a little time. Then enjoy your new home. Around here they say that new houses are sprouting like weeds. In the not so distant future, that statement will be taken much more literally.

Meanwhile, due to my lack of expertise in biotechnology, I’m going to develop improved varieties of gourds. Birdhouse gourds. Really, really big birdhouse gourds. And then, just in case the biotech people drop the ball on this one, I’ll be able to plant some seeds and photosynthesize my own house. 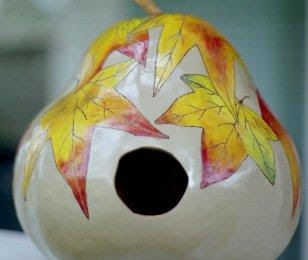