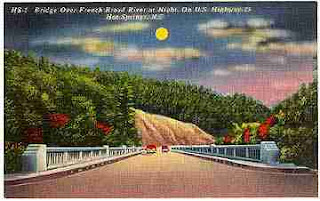 Leaving Hot Springs, we crossed the bridge and turned left, following the French Broad as it funneled into Tennessee. Just before the state line, crazy stacks of limestone towered over the road. Two hundred years ago, this was a well-known landmark in Western North Carolina, situated on the Cherokee frontier boundary and along a major drovers route from Kentucky and Tennessee to the low-country plantations of South Carolina.

John Strother, a surveyor of the 1790s, described the Indian pictographs still visible on the rocks:
The face of the Rock bears but few Traces of its having been painted ‑ owing to its being smoked by pine knots and other wood from a place at its base where Travellers have frequently camped. In the year 1790 it was not much smoked the pictures of some Humans, Wild beasts, fish & fowls were to be seen plainly made with red paint some of them 20 & 30 feet from its base. 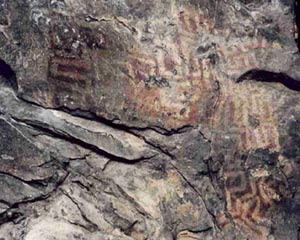 The NC Museum of History explains the Paint Rocks as they’re understood today:
The pictograph at Paint Rock, is an intricate rectilinear pattern in red and yellow. The design is similar to that found on Mississippian-period ceramics in eastern Tennessee and western North Carolina. An estimated half of the original pictograph exists today; the rest has faded or chipped off. The design and condition of the paint suggest that Paint Rock dates from the Mississippian period or later.

One stereoscopic image of Paint Rock taken several years after the Civil War features a large party of visitors clustered around Braxton Bragg. A Confederate general, Bragg had a reputation for eccentric behavior:
...a strict disciplinarian and one who adhered to regulations literally. There is a famous story about him as a company commander at a frontier post where he also served as quartermaster. He submitted a requisition for supplies for his company, then as quartermaster declined to fill it. As company commander, he resubmitted the requisition, giving additional reasons for his requirements, but as the quartermaster he denied the request again. Realizing that he was at a personal impasse, he referred the matter to the post commandant, who exclaimed "My God, Mr. Bragg, you have quarreled with every officer in the army, and now you are quarreling with yourself!"

It looks as though Bragg had a memorable visit to Paint Rock. I know I did. 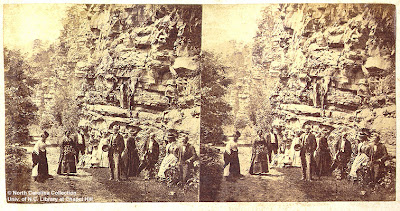