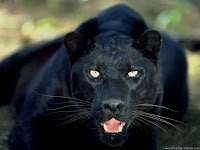 One of my neighbors insists he saw a panther scoot past the old barn a couple of months ago. I have no reason to question his veracity. Invariably, I have two responses to these sightings. A voice whispers in one ear, "Man, that’s so cool, maybe you’ll see it some day." And in the other ear, "He’s mistaken somehow. If there were panthers around here, how come you never find a carcass...or...something?" The debate is reignited with every new report.
In the past thirty years of kicking around these hills, I have caught a fleeting glimpse of a bobcat on only two occasions. No doubt there are a goodly many of those cats roaming about, and they manage to remain almost invisible. So why doubt the ability of an even smaller number of panthers to evade detection.
At least most of the time. This week in the Cashiers newspaper, the Crossroads Chronicle, Nathaniel Axtell writes of a big cat spotted on Chattooga: "A U.S. Forest Service worker claims he dove into the Chattooga River last month to escape a black panther that was coming at him, less than two miles below the Burrell's Ford bridge."
Georgia wildlife officials thought it might have been a river otter. And despite numerous reports of black panthers spotted locally, an equally skeptical biologist in Highlands declared, "There is no such thing as a black panther." He added that if you let your imagination wander, even the tracks of a wild turkey will resemble those of a black panther. Well, what does that biologist think we are…stupid?
I agree with the reasoning of the forest service staffer’s co-worker, who concluded, "It had to be pretty scary to make him want to jump in the river that day." [More coverage of this story here.]
Back in 2002, biologist Donald Linzey went cougar hunting in the Great Smoky Mountains National Park, and nailed a few sticky pads to a few trees, in an attempt to collect some cat hair. He never collected enough to do a DNA test, found no scat, no prints. Even so, he was convinced by the number of reported sightings that a few panthers still prowl the remote regions of the park.
But, like the Highlands biologist said, imagination is powerful. One report of a cougar jumping onto the roof of a mobile home near Brevard, NC turned out to be a flying squirrel.
If speculation about mountain lions in Cullowhee and the Western North Carolina mountains isn’t enough for you, then Cryptozoology.com has a running list of strange sightings…not just cougars and black panthers, but an albatross in the Niagara, a small animal mummy, a bushy tailed possum, and a skunk ape in Tennessee, to name just a few. Mighty good stuff. The biologist from Highlands would just shake his head in disgust, but there are some intriguing tales told of unusual critters seen where you’d least expect them. What’s wrong with a wandering imagination, anyhow?
Posted by GULAHIYI at 9:59 PM

UPDATE
Thought you’d like some additional accounts of panther sightings. After publishing the story of the forest service worker having jumped into the Chatooga River upon seeing a black panther, the Cashiers (NC) Crossroads Chronicles received two letters from cougar spotters. http://www.crossroadschronicle.com/articles/2007/02/13/village_voices/letters_to_the_editor/06letter.txt
Craig Welch told of making plaster casts of cougar tracks seen in 1980. He described the unforgettable call of the panther: “we heard a high pitched and very loud scream of such volume and duration as to be beyond human capability.” http://www.crossroadschronicle.com/articles/2007/02/13/village_voices/letters_to_the_editor/04letter.txt Joe Pearson insisted that he and numerous acquaintances had seen black panthers in North Carolina and across the state line in South Carolina.
Myself, I’m still waiting – and hoping - to see my first one.

About 20 years ago, when I was a little girl, there were black panther sightings near my home in Crossville, TN.

On November 14, 2007, my sister-in-law, who leaves close to me, heard the tell-tale scream of a panther just outside her window about 8 pm. Then, about 4 am, I was awakened by what sounded like dogs being attacked. They were yelping and sounded distressed. The following evening, I came home from work to find a beagle pup on my doorstep. I located his owner, and found that he had just brought home two pups the night before, which had escaped their pen. The second pup never returned. I am sure that it was taken by the panther my sister-in-law heard earlier that night.

I was just watching a show on NatGeo about mythical creatures. I was shocked to see the black panther on the list, because my wife and I have seen one. We also live in Crossville, TN, which is weird because I noticed some one else from here posted on this topic.
The night we saw the big cat, we were inside when we heard something making a lot of noise in the garage. Our cat was going nuts, we went outside and saw this huge black cat standing in the road under a street light. It was about three feet tall and looked like it was eight or ten feet long. I was scared to death. It saw us and just turned and walked down the road and into the woods. We called TWRA Fish and Game, but they thought we were mistaken. There was no mistaking this thing, and I'll never forget the way it walked off down the road. The only picture I've seen that looked close to it was a picture of a Jaguar from South America.
I've heard people around here talk about these cats all my life, and I know for a fact that they are real.
My name is John Hall and my email is thereallybigj@hotmail.com

I live in Booneville Mississippi and was working late one afternoon near a creek that runs through town here. I saw two big cats, one black and one a light brown or dirty white. They were as big as a large German Shephard dog with long tails. They looked just like the mountain lions you see on tv.

I only saw them that one afternoon and often looked for them in that area but never seen them again.
My name is jlesley at jlesley@gmail.com