I Fish When I Please 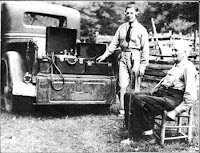 In 1937, the young linguist Joseph Sargent Hall was hired to document the lives of older mountain residents allowed to remain in the Great Smoky Mountains after the land was purchased for a national park. He met many unique people.
It was said of Mrs. Clem Enloe, from Tight Run Branch, NC, that she was "an awful hand to fish." People would slyly suggest, "have Mrs. Enloe tell about her fishing rights." She would snap at the interviewer, "Are you a little Park man or a big Park man?" Without waiting for an answer, she’d continue, "big Park man or little Park man, you son of a bitch, I fish when I please, winter or summer. See that can of worms?" (which were then forbidden in the park)
Understandably, many of the displaced residents resented the national park, saying things like "It’s the worst thing that ever ruint this country." Or as a man from Hartford, TN, said, "Before the park came in, I could shoot a rabbit or a possum whenever I wanted to. Now I don’t stand no more show than a one-legged man at an ass-kicking!"
Hall and his associates collected unforgettable stories and memorable expressions, such as:
It began to come down dusky; the sun was a-settin'.
We ought to do plenty of fishing against the season closes.
It's not generated in me to steal.
Hit'll kill ye or cure ye, one.
I didn't want to be catched in the rain and no shelter.
Dad gone it, there weren't even a sprig of fire in his place!
Hit was thick of houses, thick of people up thar then.
I had a good barn until come a wind storm and blowed it down.
I would rather surround (avoid) a snake than kill it.
I let drive (shot) at him. The bear broke to run and ran yan way up the mountain.
The day before the hunt we usually go and find where the bears are usin'. There's a heap more hard work and slavish runnin' and trampin' in bear huntin' than in 'coon huntin'.
Pictured is a CCC enrollee interviewing Steve Woody.
Posted by GULAHIYI at 11:56 PM