Land of Elk and Peacocks 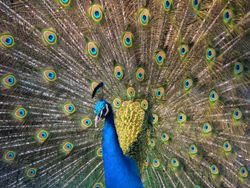 I saw a peacock yesterday, on the banks of the Tuckasegee. Like a huge pheasant, glowing royal blue, iridescent emerald. It stood there and looked back at me.
Today, I stopped to find the peacock. But it was gone. Elusive as pawpaws and persimmons.
Often we are surprised by animals - Not long ago, an elk appeared a few miles upriver from Cullowhee. From the official report in 2005: "After weeks of hard work the lone cow elk (#42) residing south of Cullowhee, NC was finally 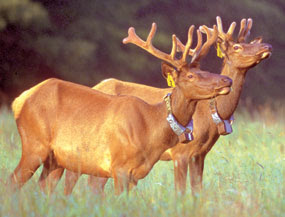 captured in late March and returned to Cataloochee after a 3-year absence."
Those re-introduced Cataloochee elk are astounding, but native elk were roaming these hills in the 1740s, as witnessed by John Brickell :
The Elk is a monstrous, large, strong and swift Beast, in shape exactly like a Deer, but bigger than a Horse, and is reported to be fearful, and subject to the Epilepsy or Falling sickness. They have two large Horns, which exceed in weight all Creatures that are yet known in the New World. Their Neck is short and thick, but the Ears and Back very long: Their Colour is like a Harts, and sometimes all White. Their Flesh is not near so sweet as the Fallow-Deer, being much courser and stronger. [Editor's note - In fact, that's what the elk pictured above are saying - "our flesh is not nearly so sweet as the Fallow-Deer..."] These Creatures may be made Domestick, and it is said, that they are so swift, that they will run more Miles in one Day than a Horse can in two. Some take the Elk for the Red Deer of America, but I am credibly informed, that they are of two different kinds, and that they will never breed together. Their Horns generally weigh twelve or fourteen Pounds. These Beasts are plentifully to be met with in the Savannas near the Mountains, and Heads of Rivers: It is reported that some of them are seventeen Hands high. Several parts of this Animal are used with goo 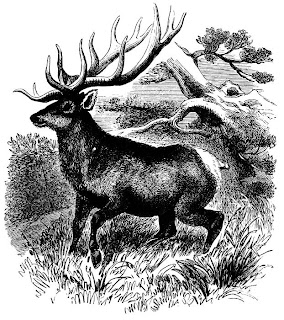 d Success in Physick, and especially the Hoofs of the Male’s hinder Feet, which have a pleasant scent when they are burnt.
On behalf of my fellow 21st centurians, thank you John Brickell...."they will run more Miles in one Day than a Horse can in two" leads me to wonder if elk could be trained as work animals, like he says. They might lift you up to clean out the gutters...stuff like that. Very cool instant scaffolding.

And if the Tuckaseigee is the river of feral peacocks, then it might as well be the land of ...domesticated elk. Why not?
Posted by GULAHIYI at 8:13 PM