Edison in the Smokies 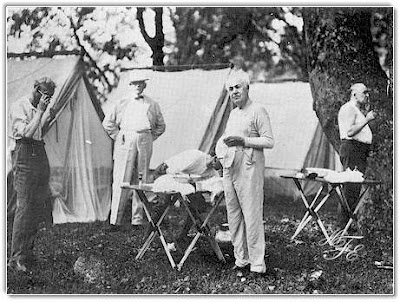 101 years ago, Thomas Edison spent a few days in Jackson County examining cobalt deposits for a storage battery that he was developing. It was not the last trip that Edison would make to the mountains.

His camping trips with Henry Ford, Harvey Firestone, John Burroughs and others notables are legendary. The old photo [above] shows the “vagabonds” camping (and shaving) in the Smokies in 1918. Left to right: Henry Ford, Bishop William F. Anderson, Harvey Firestone (stooping). Thomas A. Edison and President Warren G. Harding

One tale of the campers’ adventures is re-told by Patricia Zacharias of The Detroit News :

En route to a new campsite on a rainy day, the Lincoln touring car carrying Harding, Ford, Edison, Firestone and naturalist Luther Burbank bogged down in deep mud on a back road in West Virginia.

Ford's chauffeur went for help and returned with a farmer driving an ancient Model T. After the Lincoln was yanked from the mire, Ford was the first to shake the farmer's hand.

"I guess you don't know me but I'm Henry Ford. I made the car you're driving."

Firestone chimed in, "I'm the man who made those tires." Then he introduced two of the campers: "Meet the man who invented the electric light -- and the President of the United States."

Luther Burbank was the last to shake hands. "I guess you don't know me either?" he asked.

"No," said the farmer, "but if you're the same kind of liar as these other darn fools, I wouldn't be surprised if you said you was Santa Claus."