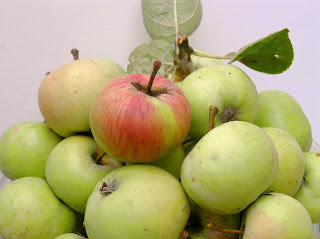 "In the year 1798, George Swain, Esq., father
of the late Governor Swain, planted the very first apple orchard
in Western Carolina. This orchard was planted on Beaverdam
Creek, six miles north of Asheville, and was selected from the
very latest varieties of apples in Massachusetts, Swain's native
state. But to his astonishment, when his trees bore fruit, yet
there was not the first variety of winter keeping apples among
them; hense, Swain concluded that the latitude was too far South
for winter apples, and gave up the object.
My wife was a step-grand-daughter of Mr. Swain, and when we moved to Macon [County, NC] in 1830, our first baby's cradle was filled with small apple trees from
Swain's orchard; and ten years after planting, I made the
acquaintance of James Carmack, Esq., then editing an agricultural
paper at Athens, Ga. Carmack had made a great effort to
cultivate Northern apples in Georgia, but had signally failed.
We compared notes; I also had failed. Carmack remarked to me,
'McDowell, I have made an important discovery that no one has
thought of - the South must have a pomology of its own, that of
the North will not suit us, particularly as it relates to winter
fruit. It ripens too soon and falls from the tree a month before
time to put it away for winter use. But we can remedy this, and
you are the man to do it. Turn out among the mountains and get
you grafts from native seedling apples; you need'nt fear but that
you will find them, for I have seen them brought to this city by 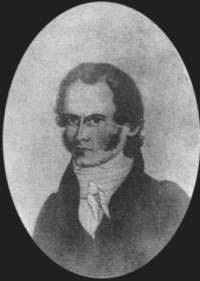 mountain wagoners, and graft your trees with these seedlings, and
in ten years you will have the very best collection of winter
keeping apples in the United States.' Saying which, he handed me
a couple of apples of different variety (it was in February),
these two apples have no superior at the North, and the white, or
light colored one is superior to their far famed Newton's pippin.
It would be superfluous to say that I acted on Carmack's
suggestion and never intermitted for 20 years every winter to
ride, inquire for, and collect grafts of new varieties of winter
apples. I have never, heretofore, exhibited my winter apples at
any 'fair,' but they have been exhibited under other names for 25
years, and never yet, without taking a premium; the only one of
which I received was sent me by Mrs. Judge Osborne of Charlotte
in the year 1860, who, when at Macon with the Judge, I presented
her with some fine apples, when she observed, 'Judge, I will take
part of these apples to the North Carolina fair at Raleigh and
take the purse for fine apples!' All I know about the result is,
she sent me a handsome silver goblet by Dr. Samuel Love of
Waynesville.
My catalogue of new apples I commenced with the two
that Carmack gave me, the first of which I named Carmack, and the
other Nickajack. None but late keepers in the list, Bullasage,
Mavereck Winter Sweet, Royal Pearmam, Hoover, Golden Pippin,
equal to Newton's Pippin. The Buff I would include for show, but
not for quality. Kingrusset and Neverfail I would plant because
they keep so well, and are of fine quality.
I would add a few Red Junes, and
early Harvests, and the Summer and Autumn apples you could not go
amiss for them. Were I again to plant, the above varieties would
meet all the wants of my taste, tho' I have left out a score of
worthy names; but not eminently first best."
- Silas McDowell writing in the Asheville Citizen, May 21, 1874
Posted by GULAHIYI at 7:39 AM

I am glad to see you blogging!