Give That Kid a Coke! 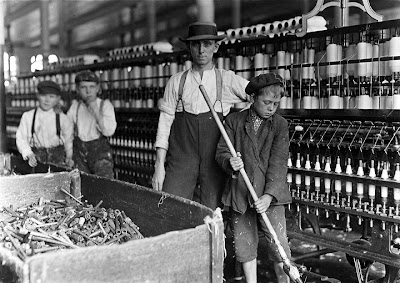 Child labour, properly conducted, is calculated to bring the highest measure of success to any country on the face of the earth. The most beautiful sight that we see is the child at labour. In fact, the younger the boy began work, the more beautiful, the more useful his life gets to be. - Asa Candler, founder of the Coca Cola Company, 1908

It’s understandable that the life of Daniel Boone has become the legend of Daniel Boone, and that he’s a Rorschach of the American experience. When I read about his early years, I find a deep and personal connection. In the mid 1700s, the Pennsylvania-born teenager moved with his family to the rolling hills of the Yadkin River valley. In the mid 1700s, my own German ancestors followed the same route to the south, and ended up just a few miles from the Boones.

Daniel Boone’s blazing of the Wilderness Road through Cumberland Gap in 1775 presaged the future of America just as much as, and arguably even more than, the signing of the Declaration of Independence a year later. Daniel Boone - the poster child for Manifest Destiny? Why not. If you retrace Boone’s Wilderness Road out of the Yadkin and across the Appalachians you’ll find it leading, not to some historical dead end, but to the here and now.

Boone’s act of pushing the frontier westward and Thomas Jefferson’s advocacy of a nation of independent small farmers would eventually culminate in the Homestead Act of 1862, which granted 160-acre tracts to settlers in exchange for their farming the land. But there was trouble in paradise, beyond the hardships of extreme weather and crop failures. Corporate interests and speculators took advantage of the Homestead Act to reap vast profits from control of water, timber, oil and other resources.

Meanwhile, the historian Samuel Eliot Morison asserts that during the Civil War:

A government generous in contracts and lavish in expenditure helped to create a new aristocracy of profiteers, who became masters of capital after the war…The foundations of fortune laid during the war were: Armour (meat packing), Havemeyer (sugar) Weyerhaeuser (lumber), Huntington (merchandise and railroads), Remington (guns), Rockefeller (oil), Carnegie (iron and s 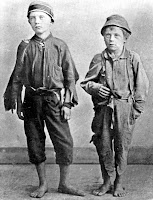 The second industrial revolution changed everything. From then on, the power and influence of the robber barons grew. In a recent story here, we looked back at the “Golden Age” of the robber barons, when child labor was a staple of life in the cotton mills. But as I said at the time, that’s a thing of the past:

There must be some other explanation for the Ten Most Brazen Iraq War Profiteers and the Windfall for the Bush Family from the war in Iraq. You “surrender monkies” are either for us or against us, after all. Do you want VICTORY or not?

So what that some real estate developers pull off a $100,000,000 heist in Mitchell County. If they’d done anything wrong, you’d see criminal charges filed against them. Right?

A good man exercises his private property rights in Waynesville and the neighbors get their homes flooded? The developer, affable Don Hairston, denies responsibility for the flood and blames the damage on the wrath of God. Might as well give credit where credit is due.

And to cap it all, this week we pick up the Mountain Xpress and see a cover story by Nelda Holder about child labor in Jackson County. Don’t call it exploitation when a developer sends an 11-year-old up the ladder to roof a house. Look at it like old Asa Candler did, “The most beautiful sight that we see is the child at labour.”

Somebody give that kid a Coke! 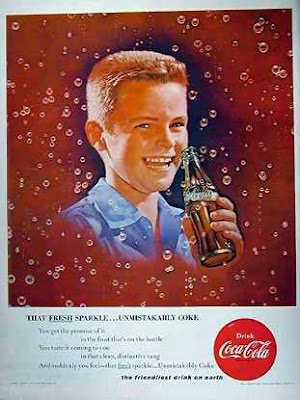