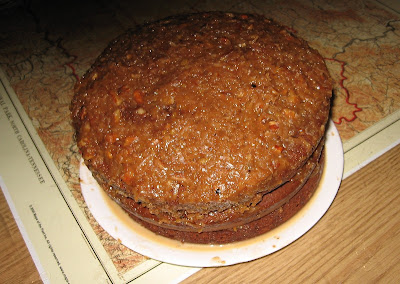 [Notwithstanding my phased retirement from the blogosphere, I stumble across the occasional item that demands posting. In the past, I extolled the virtues of turducken, squipossuhog, creasy greens and a kick-ass recipe for mayonnaise biscuits. I hope you saved room for dessert, because that’s what you’re getting this time. But first, this...]

"If it’s not one thing, it’s another."
I can’t begin to recall all the ill-advised nonsense that the good people of Jackson County have worked to overcome in the past few years. We’ve taken on asphalt plant operators, helicopter tour businesses, the National Rifle Association, miners and real estate developers – with varying degrees of success. It looks like the next episode of "Manifest Destiny – Jackson County" is being brought to you by the North Carolina Department of Transportation, hell-bent on gouging out a freeway from Blanton’s Branch to Green’s Creek. Slimy bastards.
Against better judgment, I pulled myself away from the comforts of my happy hermitage to attend a meeting this week. Ever the optimist, I figured this gathering might spawn the revival of a moribund effort to thwart the road builders. But I was disappointed. Again.
I suppose we all find different ways to feed our egos. At least I’m humble enough to admit that my own ego has an insatiable appetite. And I recognize that my attempts to fill that void seldom result in anything positive for myself or anyone else.
When it comes to lots of the activists that I’ve observed over the past few decades, I guess it’s easier to feel important than to be effective. There ARE ways to conduct meetings with defined objectives and a sufficient understanding of group dynamics to engage participants in meaningful ways and empower them to take action. But you might as well tell it to a brick wall as try to convince some well-meaning people to buy into that line of thinking.
So, if you’re alarmed by the prospects of that ill-advised freeway through the heart of Jackson County, there’s one obvious foe, and a more insidious enemy. It’s easy enough to read between the lines and see that a few well-placed individuals will cash in a lifetime of political chips, reap a small fortune and retire to Montana. That’s the real business of the NC DOT, after all. Road building is just a byproduct.
I’d like to think that concerned citizens, as we like to call ourselves, (or NIMBYs, as others might say) could prevail. But when you combine the power of the DOT with the obstinate refusal of self-proclaimed activists to accept constructive criticism, then the game is over before it begins. And that’s how a lot of good causes go down.
So I’m determined to enjoy Jackson County while I can, and treasure the beauty of each new day. Soon enough, this place will be saturated with freeways, dead streams, strip malls, big box stores, gated communities, meth-infested trailer parks and slave labor camps. Manifest destiny, indeed!
If John Bardo, for instance, ever deigned to speak to us dumb locals, he’d probably explain how progress demands that Sylva and Cullowhee should strive to be Waynesville, which strives to be Asheville, which strives to be Charlotte, which strives to be Atlanta. That’s the new circle of life in our delightful consumer culture. That’s the rising tide that lifts all boats. And to deny it is to reveal one’s backwardness, which is a university’s responsibility to eradicate. Which is why John Bardo will likely deserve to have a stretch of that freeway named after him. It’s our road to the 21st century, or at least a more expeditious way to transport thousands of impatient scholars in a big hurry to "get smashed." Thanks, Mr. Bardo, and thanks, Western Carolina University, for the new age of enlightenment. If that’s not worth sacrificing a few more mountains, then I don’t know what is.
But I digress. The next time I’m tempted to spend an evening at some meandering presentation on stopping a freeway…I plan to stay at home and bake another one of my scrumptious Gulahiyi German Chocolate Cakes. It is a lot easier to swallow. 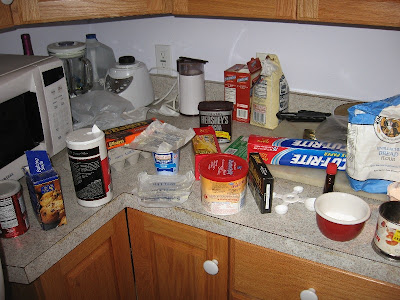 The Recipe
Prepare to make a total mess of your kitchen. But it’s worth it. First of all is the recipe for the chocolate cake batter, then the coconut/pecan frosting, then the mocha/white chocolate sauce. Yeah.
The Cake
You’ll need 9" round cake pans, 3 of them.
Sift together these dry ingredients:
3 cups flour
2 tablespoons cocoa powder
1 ¾ teaspoons baking powder
1 tsp baking soda
¼ teaspoon salt
Measure out these wet ingredients:
½ cup cola (diet cola is ok if you’re counting calories)
1 cup buttermilk 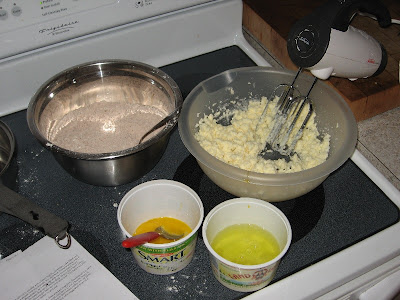 Then,
5 eggs – separated, set aside yolks and whites
1 cup butter
2 cups sugar
Use a mixer to blend the butter and sugar together.
Melt the chocolate:
4 ounces German chocolate
3 ounces unsweetened baking chocolate
After the chocolate is melted blend it with the butter and sugar mixture.
Then add:
2 teaspoons of vanilla and the 5 eggs yolks
Combine this mixture with the sifted dry ingredients.
Add the whipped egg whites. You know the drill, GENTLY fold the egg whites into the mixture.
Pour the batter into the three wax paper lined cake pans, they need to bake at 350 degrees fro about 30 minutes, and proceed to
The frosting:
Toast the following ingredients:
3 cups of coconut flakes
3 cups chopped pecans (or throw in a few black walnuts)
In a saucepan, combine and heat the following:
12 ounces evaporated milk
5 egg yolks
¾ cup white sugar
¾ cup brown sugar
1 ½ sticks of butter
Continue to stir, so the mixture doesn’t burn. Keep cooking and it will eventually sort of caramelize, I think is the appropriate term.
Add the toasted coconut flakes and chopped nuts. 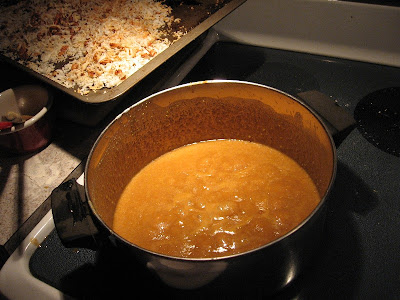 I’ll warn you right now. This is just enough frosting to cover the cake layers. If you want to DOUBLE the frosting recipe, you probably won’t regret it.
Finally, let’s make
the sauce:
½ cup STRONG brewed coffee
1 cup heavy cream
4 ounces white chocolate
[I'd like this sauce better if it were thicker...if you can tell me how to do that, then thanks in advance.]
Combine all these ingredients and heat them in a saucepan.
When the cake is done (use the toothpick trick or whatever works for you), assemble the cake.
Pour the mocha/white chocolate sauce over each layer, followed by the coconut/pecan frosting. 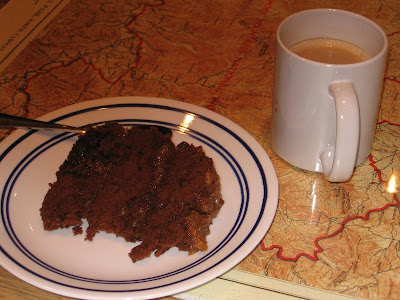 After frosting the last layer, pour the rest of the sauce over the entire cake.
Pour a tall glass of cold milk or a cup of hot coffee. Slice off a big chunk of Gulahiyi's German Chocolate Cake.
Enjoy.
Posted by GULAHIYI at 3:56 PM

your insight to what is happening in Jackson County is amazing. Yet with all that knowledge you maintain a sense of reality and acceptance with a delightful humor. can you tell I am a fan? thank you for how you put into words what seems to be what a few of us "SEE". I think many of the folks are to busy to "see" what is...thanks keep writing and I love your photos!