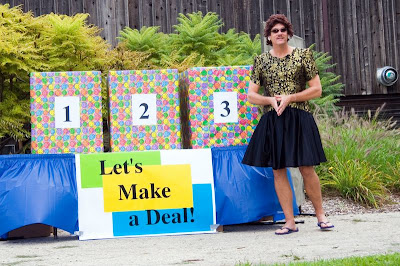 Let’s say that you just HAVE to call a piece of the North Carolina mountains your very own.

And let’s say that you can select a home site from gated communities in three lovely locations.

But wait! I’ll even give you a little preview of what’s behind each door. Here goes.

DOOR NUMBER THREE
How would you like to live in an equestrian community where you can dine at one of several restaurants, indulge in holistic spa treatments or share a hot tub with friends at the Grand Lodge? How would you like a sunset wine cruise on the lake?

REMEMBER, you can choose only one, so which will it be? Hmmm…. Decisions, decisions.

Which door will it be?

If you selected DOOR NUMBER ONE, welcome to the charming Village of Penland in Mitchell County North Carolina. One little problem, though. The NC attorney general shut down the Village of Penland on charges that Tony Porter and friends pulled off a $100,000,000 scheme that diverted loan proceeds to lavish Greek cruises, failed shopping centers and similar disasters.

And a lawsuit filed on behalf of Village of Penland lot purchasers accuses loan officers at BB&T, First Charter, Carolina First, and United Community Banks of working closely (colluding?) with the developers. Door one? Nice choice!

If you went with DOOR NUMBER TWO, then pack your bags for Cataloochee Wilderness Resort in the Jonathan Creek valley of Haywood County, NC. Cataloochee Companies, LLC recently announced this fantastic 4500 acre resort. I guess you could say it’s still in the planning stages. According to news reports this week, the developers just need to purchase the acreage from a number of reluctant land owners, introduce themselves to Norman and Palmer, dot a few T’s, cross a few I’s…you know, minor details.

But the happy news is that Waynesville businessman Dean Moses is identified as a consultant on the project, with a knack for rounding up investors to back projects like Thermal Products, Enterprize Park and Grand Ridge on the abandoned Dayco industrial site. And as far as I know, those would still be going like gangbusters had it not been for the bankruptcy and foreclosure. But that’s ancient history. Welcome to the new day at Cataloochee Wilderness Resort!

If you chose DOOR NUMBER THREE, then you’ve attained a piece of Plateau Perfection, a foothold on the vastness stretching from Cashiers to Cullowhee, known simply as "River Rock". Call today, 888.743.2975, to schedule your visit.

Ask about the Artist in Residency Program. Ask for a tour of the River Rock Culinary School and the River Rock Hospitality School, the Tuckaseegee Lodge, the Orion Spa and the Mother Jones Hot Tub. And as sales executive Bart Franklin writes, "Perfect your gold [sic] game on our 18-hole gold [sic] course by Phil Mickelson Design, skim across the lake in one of our restored wooden Chris Craft classic boats, challenge your children to a game of tennis on one of our courts…" All this and more awaits you. NOW!

Join the ranks of other satisfied River Rock land owners like Barry J. Schulman, Nicholas Namba and Man Q. Tran. Cordial folks who'll slide over to make room in the hot tub for you. "Howdy neighbor, and welcome to River Rock! Come on in, the water's fine!"

Don’t forget, "A formidable force of human heart, intellect, and creativity was galvanized for River Rock to come to be. Names that will all reappear across time when people ask whose hand such marvelous places are by. The masterminds behind River Rock consider themselves students of the land rather than its overlords, for if we have learned anything from nature, it is that we shall always have more to know."

There you have it, reassuring words from the masterminds themselves, Tony Corliss and Ted Morlok, the Crick and Watson, the galvanizing braintrust, of the Legasus Corporation. And though I can’t compete with their command of the language, I do share this with T ‘n T…

I consider myself a student of the real estate industry rather than its overlord, for if I have learned anything from developers, it is that we shall always have more to know. 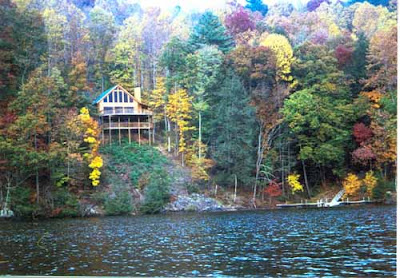 THE REST OF THE STORY

From the Asheville Citizen, we read:
Investors are suing four banks they accuse of working closely with developers on a Mitchell County development project that collapsed, costing them millions of dollars amid a state fraud investigation. The banks’ loan officers were willing participants in a scheme that left investors owing at least $80 million on property in the Village of Penland that is now worth a fraction of that amount, according to a complaint filed on behalf of 99 investors in Wake County Superior Court in Raleigh.

You’d be hard pressed to find a more informative narrative and case history in how the mortgage crisis has come about than to study the complaint filed by the plaintiffs. Read it here.
I continue to be amazed at how the media have neglected this story….

Moving on to happier news, the future looks bright for the Cataloochee Wilderness Resort. Check out these spectacular renderings: 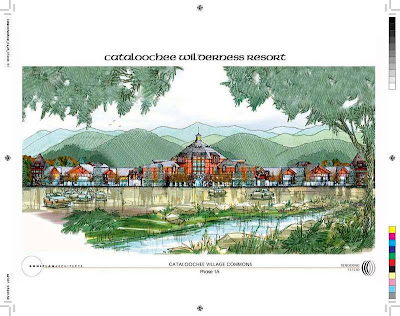 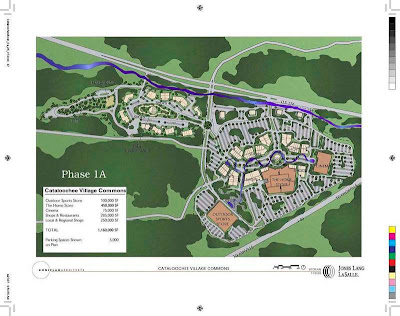 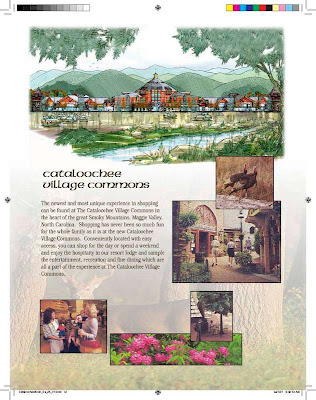 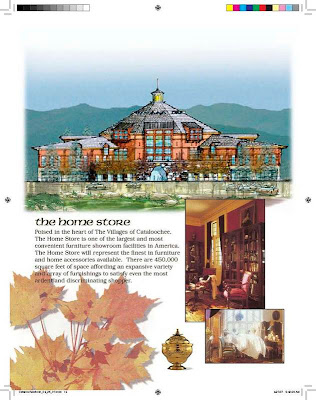 And CWR has its own website, appropriately enough "still under construction." But for my money, this knoxnews.com story tells us all we need to know about the Cataloochee Wilderness Resort. The word "brazen" comes to mind.

Closer to home, here amongst the Children of Fortune, we’ll be taking a closer look at the California software tycoon who has been buying up big chunks of Jackson County. Later…
Posted by GULAHIYI at 11:04 PM 1 comment: 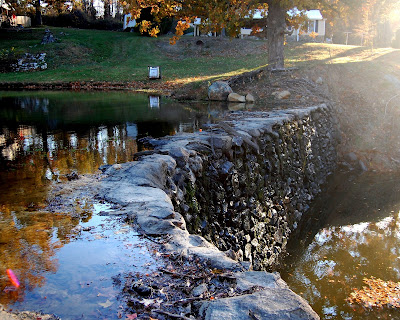 Not that I expected him to be.

Driving east, I wanted to escape the interstate. I wanted to take the blue highway that ran through Kimesville.

I’d been there without stopping in 1975, for just one glimpse, one random moment while speeding past.

Thirty-two years later, I knew the fisherman I’d seen that day would be absent. No doubt, he’s long since died. His Kimesville is gone.

This Kimesville wasn’t exactly the place of my memory. It was quiet, save for water trickling over the ancient dam and cars hurtling past on the way to other places. Nobody fished from the lake.

Later, I found what I’d written to make sense of that first visit to Kimesville long ago.

Serene sacred sculpture,
The old man in Kimesville
Sat on the stone dam
And fished.

It was Saturday evening.
The sun was filthy.

I tried to imagine myself as
Water over the dam
The fish on the hook
Or the old man.

I have it figured.
One million feet of scenery
Passed by my car this afternoon.
And what did I see?

I am mostly blind
And getting blinder.

Night comes on,
Light shrinking into stars,
With hopes of getting there
Somewhere behind me. 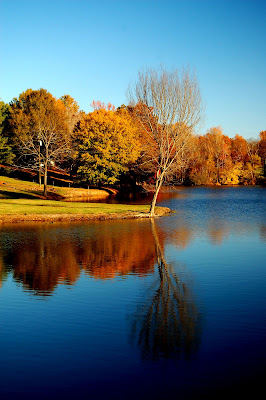 Listening for the Rutherford Trace 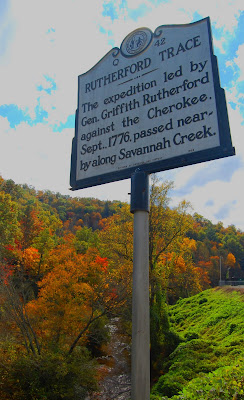 I can’t get it out of my head.
Every day I cross the path. And whether I go west or go east, the signs are there to remind me.
Most people, when hearing of the summer of 1776, think of the document signed in the city of brotherly love. I think of the irony. I think of Griffith Rutherford bringing 2500 men and war, havoc and death, to these mountains.
It’s not easy to remove that summer from the safe distance of history, to feel the fear, to smell the smoke and ash carried by the wind, to see the blood mingling with the waters of the Tuckasegee.
A few days ago, I passed through a valley north of Marion, where soldiers gathered for the expedition. I looked for those men, leaving their farms in the Carolina hills to fight a war on terror. Did they crave adventure? Did they have doubts?
And when the ones who returned, returned home, what stories did they tell their children and their grandchildren? What did they say about this place and the people who lived here?

It’s almost a dream. Maybe now, that’s all it is. Maybe that’s what life and death and war become, given time.
A couple of weeks before he was fired by tribal officials, the editor of The Cherokee One Feather newspaper reprinted Columbus Day, by the Cherokee poet and artist Jimmie Durham.
It begins:
In school I was taught the names
Columbus, Cortez, and Pizarro and
A dozen other filthy murderers.
Filthy murderers? You wouldn’t want to take a chance on visitors to your casino reading this stuff, would you? Maybe not so good for business, if you believe poetry has any power. But let's get back to Columbus Day:
In school I learned of heroic discoveries
Made by liars and crooks.
The courage
Of millions of sweet and true people
Was not commemorated.

Let us then declare a holiday
For ourselves, and make a parade that begins
With Columbus' victims and continues
Even to our grandchildren who will be named
In their honor.

Because isn't it true that even the summer
Grass here in this land whispers those names,
And every creek has accepted the responsibility
Of singing those names?