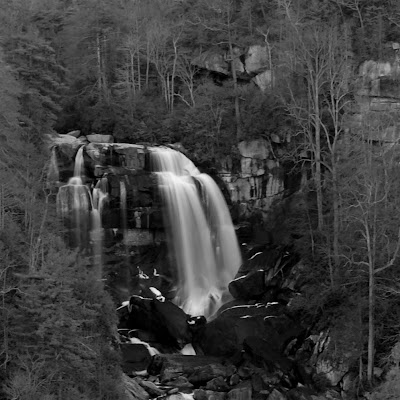 You may recall this blog has been following the reports of cougars and black panthers in SC, GA, NC and TN. Just this evening, a new comment came in, from Charles:

My first trip to TN turned out to be a good one. On January 23, 2008 in the evening, I was driving from Nashville to Pickwick Lake on business, Traveling from Interst 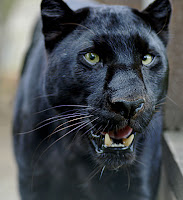 ate 40 then South on highway 69. On the last stretch of highway, I was on Highway 128 between 9:00pm & 9:30pm I was passing several deer that were grazing near the sides of the road. I am from Wisconsin and watching for the glowing eyes of deer is not a uncommon practice to ready yourself for one to cross the road. What I saw near Nixon crossing the road was not something I could prepare my self for. I saw the glowing eyes near a driveway of a residence and it turned and leaped right in front of my car. I stopped quickly for the animal and in the headlights it was very clear it was a Black Panther. It paused startled and in a crouch position and took up almost all of the width of the highway lane that I was in. I was looking in at it in excitement and then took off in a shot with the long tail swooping in the air directly behind him. There is no way I could mistake what I saw for any other animal! The Panther was about 15 feet infront of me and looked right at my rental car. I did not know at the time that it was a rare sighting. After talking with people today (Jan 24) and curious looking on the internet I am finding that what I saw to be quite a unique event.

In recent weeks, I’ve already heard from several other folks in Tennessee who report having seen black panthers. Make of it what you will. Meanwhile, one Asheville paranormal website has some details on cougar sightings in WNC. An even better site is "Western Tennessee Cougar Sightings - Maintained by the Biology Department of Union University." 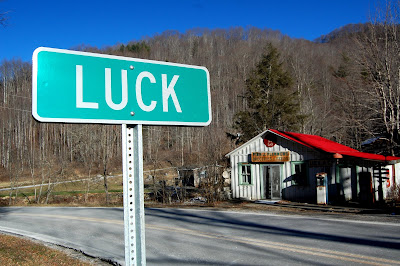 The following first appeared here January 9, 2007. I heard today from the person living in Maggie's house in Mount Hope, Ontario...so here's a rerun of last year's story, along with today's comment.

I wandered today to the hill, Maggie,
To watch the scene below -
The creek and the creaking old mill, Maggie,
As we used to, long ago.

The green grove is gone from the hill, Maggie,
Where first the daisies sprung;
The creaking old mill is still, Maggie,
Since you and I were young.
If you can’t trust the Daughters of the American Revolution and an Eagle Scout then who can you trust?
The story begins as we meander along the route of the millenium-old Unicoi Turnpike in the hills of Tennessee, just north of the spot where John Muir crossed the Hiwassee River on his thousand mile walk to the Gulf of Mexico (September 17, 1867). As soon as I saw the sign for Maggie’s Mill Historic Site, I pulled onto the gravel road leading to a small stream. Some pilings along the creek told me that a mill, long since gone, had operated there. And then, at the edge of the road, I read this marker: 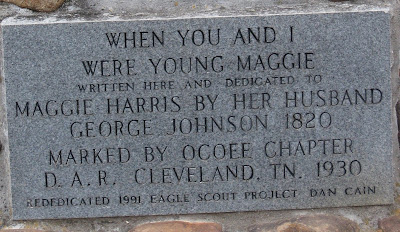 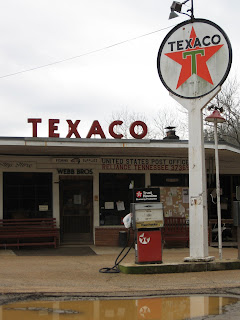 I made a mental note to get to the bottom of the story. But the road beckoned, and more places to explore. At Reliance, Webb’s Store stands on the southern bank of the river. Been a long time since I’ve seen a Texaco sign like this:

And just down river, near the confluence of Junebug Creek, this vintage house is a real beauty: 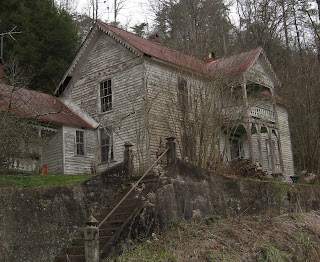 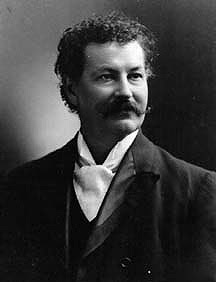 But I kept thinking about that song, Maggie. And even if I’d never heard it, I could pretty well imagine the melody and could hear Al Jolson singing it, Maaaaggieeee. Back home, it didn’t take long to find some recordings of the song, plus lyrics and sheet music. I was on a roll!
I even found a picture of the dapper songwriter:

And a picture of his beloved Maggie Clark: 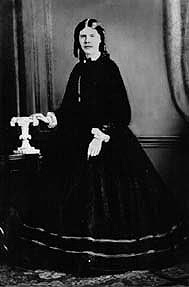 Clark? I thought her name was Harris, but we’ll let that slide. Johnson didn’t scrimp on the sentimentality, and when you learn the story behind the song, you understand why. He was a schoolteacher in Hamilton, Ontario and Maggie was one of his students. I guess there weren’t any vigilant school administrators to question the propriety of what happened next. G. W. and the tubercular Maggie fell in love and were engaged to be married. When she became ill, he penned the lyrics to "When You and I Were Young, Maggie" and published them in his book of verse, Maple Leaves. (This was Ontario, CANADA, after all.)


They married later that year, but after seven months, poor Maggie died on May 12, 1865. Johnson’s friend James A. Butterfield (1837-1891) set the words to music and the rest, as they say, is history. Now hold on, what about the 1820 date carved in the monument at Maggie’s Mill? George Washington Johnson was born in 1839 and wrote his poem in 1864. Maggie whatever-her-name-was was born in 1842.
So they got the 1820 date wrong, but there must have been a Tennessee connection for George and Maggie. Let’s see, the widower marries two more times, moves from Canada to Cleveland and eventually to Pasadena, California where he died in 1917. No mention of Tennessee at all.
But the song lives on, recorded by everyone from John McCormack to Benny Goodman to Fats Waller to Mac Wiseman.
And to cap it all, "When You and I Were Young, Maggie" made it into the Canadian Songwriters Hall of Fame in 2005. Wow!
So what of the Tennessee claim? All I could find was a gazetteer listing for Springtown, Tennessee: "A picturesque mill adorned the bank of the creek and was first known as Harris Mill. During another period, it was known as Maggie’s Mill; local residents insist that it inspired the ballad, ‘When You and I Were Young, Maggie.’" INSIST!!!!! That’s not going to cut it. I might as well INSIST that Beethoven wrote the Fifth Symphony on MY back porch. Look for the granite monument, coming soon.
Despite all my big talk about the value of preserving local legends, I’ll make an exception for something as blatantly misleading as the Maggie’s Mill "Historic" Site.
Polk County, Tennessee should be ashamed.
The Ocoee Chapter D.A.R. should be ashamed.
And I found the phone number for that Eagle Scout, Dan Cain. I’m tempted to give him a call, because he’s got some ‘splainin’ to do, Maggie.
They say that I'm feeble with age, Maggie,
My steps are less sprightly than then,
My face is a well-written page, Maggie,
And time alone was the pen.
They say we are agèd and grey, Maggie,
As sprays by the white breakers flung,
But to me you're as fair as you were, Maggie,
When you and I were young.

Just wanted to say that I found your post by accident while I was lookin up some information on my house. I live in the farmhouse that Maggie Clarke grew up in Ontario (and her name was definately not Harris). I find it funny that there are so many people that want to claim this song and story. Its original to Mount Hope, a tiny little dot on the map. Its fun though to hear other peoples stories and it makes it easy to see how old tales and stories can become so distorted after time.

As the drought worsened in 2007, waterfalls almost dried up. Over the past month, though, the rain renewed the waterfalls to a surprising degree. The first photo of Cullasaja Falls was taken October 22, 2007...the second photo of the identical scene was taken January 6, 2008. 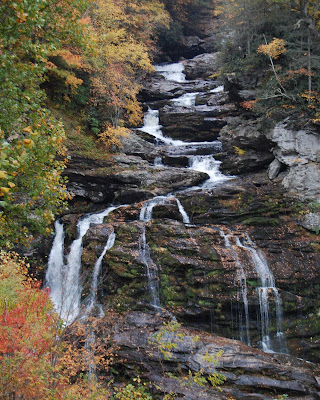 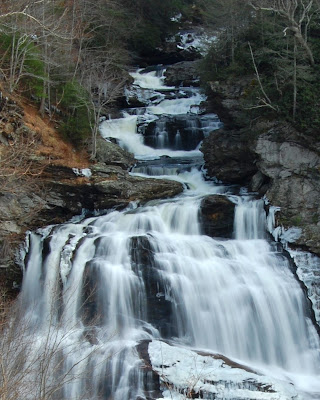 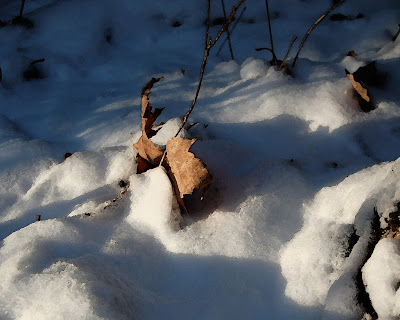 Posted by GULAHIYI at 5:23 PM No comments: