You Uns Is Plum Hitched!

Like James Wells Champney, who had also visited Webster, he was well known as an artist and illustrator. Examples of his artwork are included in this post. (He also provides tantalizing details of setting up a camera and taking pictures at the forks of the Tuckasegee...and at other locations near Cashiers. Oh, to track down those photos now!) But that part of the story will have to wait. 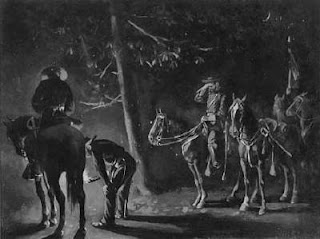 For now, here’s another excerpt from his account of the 1890 visit:

North Carolina exacts a tax of $2 for a marriage license, and to avoid the outlay of this pittance the mountaineers will tramp 50 miles down to the South Carolina line. I heard an amusing story of a youthful pair, rich in affection and poor in money, who were overtaken by a wag from Cashiers valley as they were coming down the slope of the Blue Ridge.

"How far to South Car’lina, capen?" demanded the eager but weary bridegroom.

"You uns done crossed the line ‘bout a quarter back," said the Cashiers valley man. "Youse plum in hit now. Keep this yer road ‘bout a mile down into the settlement, an thar you uns will find a preacher by the name of Bennet, an he don’t ask nary cent for marryin folks. I’ll just ride ahead an have everything ready."

Bennet, who had no more authority to perform the ceremony than he had to declare war, stood, spelling book in hand, on a sandy spot in the road when the couple arrived, and concealed behind the fences were several of the neighbors to witness the sport.

"Jine hands," said Bennet. "Hold on! I never seed a gal married in her bare feet. Seein as how you uns is got to the end of your journey, I ‘low the bride better sit plum down and put them shoes on. South Caroliny law says no bride ain’t married bein her shoes is tied round her neck endurin the ceremony.

"An you, young man, jest lay your ‘baccy on that rail. Now jine hands.

"You are goin to take this gal for better or for worser, for to be your wedded wife. Great Scott! Got a rale golden ring? What’ll you uns take for hit? Give you half a dollar. Won’t sell hit? All right. Keep a-holt. You gal, you ‘cept him for your old man an swar to milk the cows and feed the young ones? All right, friends. You uns is plum hitched. John, you kiss the bride. Now go home, an good luck to you."

Mine host Hooper, who had witnessed the scene, came to think that it was rather a serious joke and told Bennet that he had gone a little too far. Whereupon Bennet waxed exceedingly wroth and declared that his reputation was as good as any man’s in the settlement, and he wouldn’t have his integrity impeached.

A week later Hooper handed a note to the mail rider informing the happy couple that the ceremony was a fraud, and that Colum Long and Jack Davis were the practical jokers who had victimized them. The mail rider found the girl’s mother at the post office and left her the maddest woman on Chunky Gal mountain.

A few evenings thereafter as Hooper was sitting on his porch along came the same pair from the south, re-enforced by the bride’s father. "Can’t you give us something to eat, neighbor?" said the old man. "I allow my gal is rightly married now. Whar’s them varmints, Colum Long and Jack Davis? I ‘low to put the law on to them."

The party was fed and the old man pacified and advised that it would be better to keep the matter quiet and prevent unpleasant gossip up Chunky Gal way. 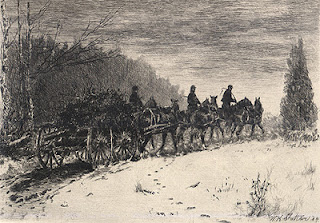 Reading this account reminds me of my own boyhood, growing up in the Southern Piedmont of North Carolina during the 1950s and 60s. Even then, it was not uncommon for young couples to "run off to South Carolina" because of the less restrictive requirements for getting married there. But until now, I never did hear about any fraudulent justices of the peace presiding over ceremonies as a little practical joke!
Posted by GULAHIYI at 11:11 PM