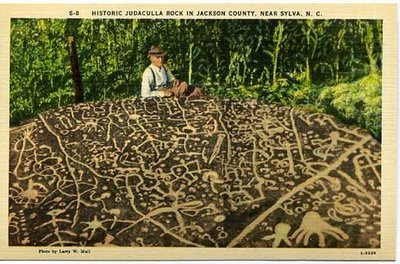 Have you ever seen floaters?

You know, the little squigglies that seem to float along the surface of your eyes. Floaters are one kind of entopic phenomena. Floaters appear as shadow-like shapes that appear alone or together with several others in one's field of vision. They may appear as spots, threads, or fragments of cobwebs, which float slowly before the observer's eyes. Another entopic phenomenon is a phosphene, or the perception of light without light actually entering the eye, for instance caused by pressure applied to the closed eyes.

Other entopics can be experienced during various trance states. One student of the subject explains the connections between entopic designs, trance and symbols of cultural significance:

The human brain hates the random, hates chaos. It tries to find ways to turn random entopic designs into meaningful symbols. In the middle stage of trance people generally focus on combining entopics with familiar items from their lives. As trance deepens, its imagery moves away from personal memory and toward deep cultural themes.

I was not aware of entopics until a reader commented on a story posted here in January 2007, Judaculla’s Microscope, which discussed various theories explaining the odd carvings on Judaculla Rock, several miles from Cullowhee, NC. Here’s that comment:

Have you ever heard of entopics? Look it up. See especially the research of Lewis-Williams and Dowson. Here's a quick breakdown of it: http://www.oubliette.zetnet.co.uk/Intro.html

If you follow the link to that site, you’ll find that entopics has been suggested as a factor in the creation of paleolithic art:

In 1988, J. D. Lewis-Williams and T. A. Dowson put forward a theory which they claimed explained the non-figurative images of Upper Palaeolithic parietal and mobile art. They also claimed to have identified the circumstances under which these images were produced. A synopsis of their theory follows. The non-figurative motifs found in Upper Palaeolithic art forms, among others, are in fact entoptics.

Entoptic is a generic term used to describe phosphenes and form constants. Phosphenes and from constants are generated by the human neural system, and can be seen with the eyes closed. Such imagery is enhanced by hallucinogenic drugs, such as L.S.D. These drugs would have been taken to induce visions, as part of a shamanic ritual. Once these visions ended the motifs which had been 'seen' in the visions would have been portrayed on the walls of caves and on mobile pieces of art.

Lewis-Williams and Dowson make five major assumptions. First, that phosphenes and form constants occur in all Homo sapien sapiens, and have always done so. Secondly, that the drugs needed to produce an altered state of consciousness would have been available to our antecedents. Thirdly, that they would have taken these drugs if available. Fourthly, that this drug-taking would have been a part of a shamanic ritual. Finally, that having seen these entoptics, our antecedents would have wished to record them in some form. The aim here is to locate evidence in support of Lewis-Williams and Dowson's theory. To systematically assess the basis on which these assumptions have been made, and to decide if their claims are justified....

Fascinating stuff! There's much more at that site, if you want to explore the role of entopics in paleolithic art.

For more background on Judaculla Rock itself, the following excerpt is from Judaculla’s Microscope.

The NC Museum of History explains its significance:

Judaculla Rock is the largest and best-known example of rock art in North Carolina. It is located in Jackson County on Caney Fork. According to legend, the Cherokees named the rock after "Tsul kalu," a mythical giant hunter whose feet and hands scratched the rock as he leapt from the top of his mountain home and landed on the rock in the valley below.

Therories abound. The rock contains prehistoric code, a hidden message. It is a map, a boundary marker, a treaty monument. I’m considering my own theory and it will be a good one. We all want to know how Judaculla Rock came to be, and it’s hard to take "Nobody knows!" for an answer.

So there’s always room for another explanation. Here’s one I’d never seen until now, raising the new question, "Could Judaculla Rock rewrite the history of technology?" The Dutch scientist Anton Van Leeuwenhoek invented the microscope 1674. Judaculla Rock was etched several hundred or several thousand years prior to that date.

And yet, Judaculla Rock contains distinct likenesses of microscopic life. That’s rather obvious when you compare the pictures of the amoeba, the diatom and the others. So had an earlier civilization already invented the microscope that made the Judaculla carvings possible? Or in the distant past, did astronauts from another planet visit Caney Fork and leave drawings of the basic life forms found throughout the universe?

The L.E.M.U.R. team of paranormal investigators visited Judaculla Rock and entertain the theory that it depicts various microscopic forms. For videos from their Judaculla expedition, click on the following links (Parts 1 and 2):