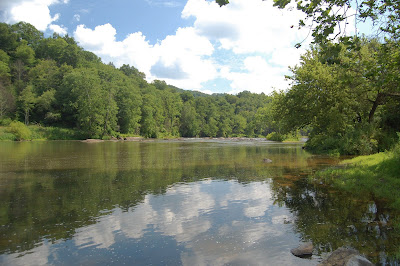 [Grayson County, Virginia] While travelling among the neatly maintained farms overlooking the New River, I caught a glimpse of a brick monument directly across the road from a white barn. Making out the words "Osborne Fort," I sped past. But it only took me a second to realize that the place warranted a closer look.
The marker identified this as "Osborne Fort Cemetery, 1812-1877." So, was this a military installation during the Civil War? Was this a strategic encampment during the Revolution? Or was it a blockhouse to protect the frontier settlers from disgruntled Cherokees? The answer was not obvious, as the gravestones were the only indication that this place had ever been anything other than a farm. 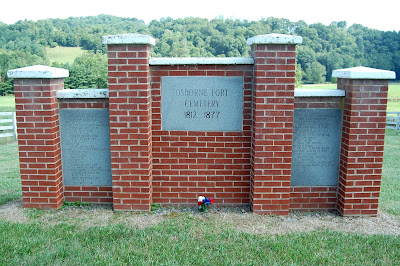 Something about the cemetery seemed odd. It wasn’t the fact that this cemetery was so carefully tended, but that the stones were arranged so precisely. I had never seen a graveyard arranged with such perfect symmetry. The markings on the stones were only partly legible. It helped that the monument next to the road bore the names of all the people buried in the cemetery: mostly members of the Cox, Osborne, Thompson and Ward families, several slaves and a few Native Americans.
Only later would I learn tbe story of the Osborne Fort Cemetery and the story of Osborne Fort itself. The cemetery extended to the fences visible in the photograph, but in the late 1950s the landowner removed all the stones. During the 1970s, the cemetery was threatened with flooding from a proposed dam on the New River, but plans for that project were eventually abandoned. The brick monument was constructed to mark the cemetery in 1982. After some of the original headstones and footstones were recovered from storage in 2004, they were placed on individual concrete pads in the cemetery, which explains the careful spacing of those markers. 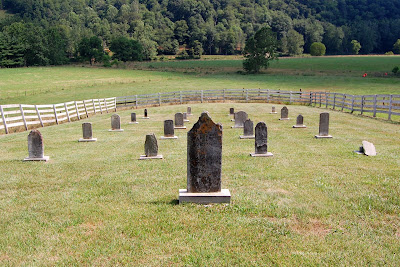 Ephraim Osborne Sr. (1723-1794) made a living as a fur collector working the Yadkin Valley with Daniel Boone’s colleague, Christopher Gist. Around 1761, Osborne and his family moved from Rowan County, NC to Grayson County, Virginia. Their new land, between Bridle Creek and Saddle Creek (tributaries of the New River) was a favorite hunting and fishing spot of the Cherokees, who were reluctant to forfeit the land without a fight. So, to protect themselves and nearby settlers, the Osbornes built a fort on their farm.
The Osbornes did experience a deadly encounter with the Cherokees in 1764, while Ephraim Osborne’s sons were deer hunting in nearby Watauga County, NC. Enoch, Solomon and Ephraim Jr. got drenched by rain, so they set up camp and hung their wet clothes by the campfire. Sometime during the night, Cherokees shot into their camp and killed 21-year-old newlywed Solomon Osborne. After fleeing into the darkness, Ephraim crept back to retrieve his horse, while Enoch returned home without shoes and in his night clothes.
Enoch Osborne (1741-1818) raised his family on the farm at Osborne Fort. He was captain of a militia unit during the Revolution, a county magistrate and a Methodist leader. In March 1792, Bishop Francis Asbury stayed at Enoch Osborne’s during one of his many trips through the area. Upon his death, Enoch was buried at the Osborne Fort Cemetery.
When I began to investigate Enoch’s brother and fellow survivor of the deadly hunting trip, Ephraim Osborne, Jr. (1752-1852) the story got really complicated. In 1774, Ephraim married Mary "Polly" Brock (1757-1855). Polly was the daughter of Aaron Brock and Susan Caroline Davis Brock, a full-blood Cherokee. Some people contend that Aaron Brock was half Cherokee and also known as Cutsawah or "Chief Red Bird" for whom the Red Bird River in Clay County, Kentucky was named.
Depending on whose genealogy you want to believe, Polly Osborne had an illustrious family tree that included:
Chief Doublehead – a controversial Cherokee leader in the Cumberlands, and father of Princess Cornblossom. Doublehead was murdered near Hiwassee Station, Tennessee after making more than a few enemies.
Attakullakulla – as a young man, he returned to England with Sir Alexander Cumming following the 1730 coronation of Moytoy at Nequassee (Franklin). Almost half a century later he encountered William Bartram on the banks of the Nantahala River near the Winding Stairs.
Christian Gottlieb Priber – A Jesuit who settled among the Overhills Cherokee with the intention of establishing a utopian society. He was arrested and died in a Georgia prison. Two books he wrote while living with the Cherokees have never been found.
Ephraim and Polly Osborne left the New River valley to be closer to her family in Harlan County, Kentucky. They must have had plenty of good stories to share at their family gatherings. Ephraim died at the age of 100. Polly lived to be 97 years old.
Posted by GULAHIYI at 7:04 AM

Long time-no hear on VOP. There has to be some juicy tidbits floating around? I did hear some hearsay about Frank Amelung. Possible jail time of 10-25 years. He has heart problems and may not see the light of day again. He is 59.

Frank Amelung/Village of Penland is in prison at the same facility as Bernie Madoff.

Nice blog on the Osborne Fort & Cemetery. I went there last fall after thinking about it for a few years. Ephraim Jr. & Polly are my 4thgreatgrandparents. I have been to their graves i Harlan County, also. They left us a great history.
Doug Kretzer, Floyd County, KY

Thank you for sharing! I have been starting to look into the maternal line from my father's side and discovered that Enoch Osborne would have been one of my great-grandfathers six generation's back.