Emergence of the Swallowtail

"The caterpillar does all the work but the butterfly gets all the publicity."
George Carlin

"There is nothing in a caterpillar that tells you it's going to be a butterfly."
R. Buckminster Fuller

"A caterpillar who seeks to know himself would never become a butterfly."
Andre Gide 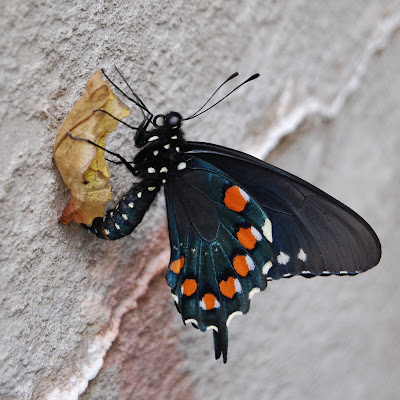 A few minutes ago, I happened across a black swallowtail butterfly that had just emerged from its chrysalis. You could call it a new beginning, although it means the swallowtail is commencing on the final month of its life. For half a year or more, the swallowtail has lived as something other than a butterfly, first as a caterpillar and then as a pupa. 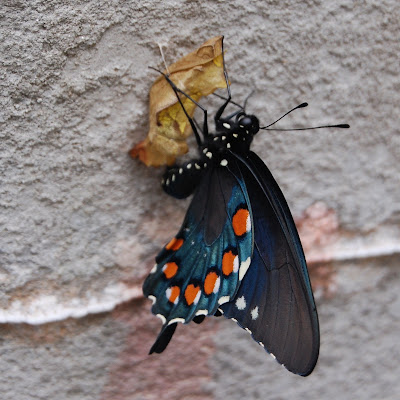 The caterpillar feeds on the foliage of umbellifers, such as carrot, fennel, angelica, dill and milk parsley plants, growing rapidly and shedding its outgrown skin four times. Eventually, the mass of the caterpillar’s body breaks down to provide nutrients to the cells of the young pupa that will develop inside the chrysalis and burst forth as a butterfly. 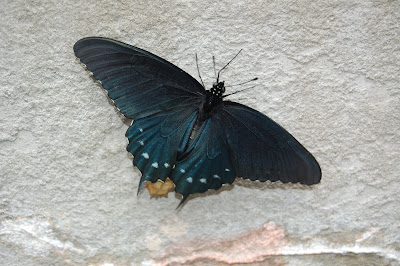 As soon as it can fly, the butterfly seeks a mate to produce the fertilized eggs that will be laid on a food plant and start the cycle all over again when they hatch as tiny caterpillars.

The three photos above are of this afternoon's swallowtail. Here's a swallowtail that I saw last August. 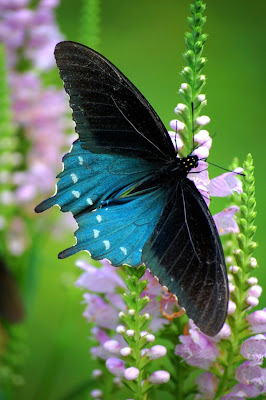 For a view of the stages of the swallowtail’s life cycle:
http://www.pbase.com/rcm1840/lifecycleofblsw

From another source, here's time lapse video of the swallowtail breaking out as a butterfly:

And if you're inclined to raise a swallowtail to maturity, click here for detailed instructions:
http://www.glorious-butterfly.com/black-swallowtail-butterfly.html
"The butterfly's attractiveness derives not only from colors and symmetry: deeper motives contribute to it. We would not think them so beautiful if they did not fly, or if they flew straight and briskly like bees, or if they stung, or above all if they did not enact the perturbing mystery of metamorphosis: the latter assumes in our eyes the value of a badly decoded message, a symbol, a sign." Primo Levi

"The butterfly counts not months but moments, and has time enough." Rabindranath Tagore

"Happiness is like a butterfly which, when pursued, is always beyond our grasp, but, if you will sit down quietly, may alight upon you." Nathaniel Hawthorne
Posted by GULAHIYI at 5:23 PM

Hello, beautiful photos, great text. Thank you for visiting my blog a little while back. I just found you tonight. I am grateful you are out there.