Quaff Again of the Ancient Delirium 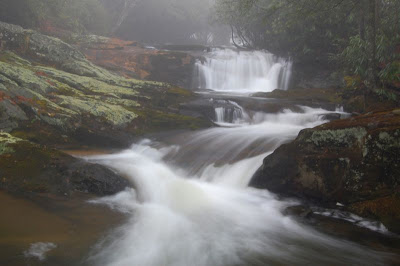 Is Herbert's Spring located near this Highlands stream?
He was possessed by that extraordinary renunciation of civilization which now and again was manifested by white men thrown among the Cherokee tribe…. Whether the wild sylvan life had some peculiarly irresistible attraction; whether the world beyond held for them responsibilities and laborious vocations and irksome ties which they would fain evade; whether they fell under the bewitchment of "Herbert's Spring," after drinking whereof one could not quit the region of the Great Smoky Mountains, but remained in that enchanted country for seven years, fascinated, lapsed in perfect content—it is impossible to say. There is a tradition that when the attraction of the world would begin to reassert its subtle reminiscent forces, these renegades of civilization were wont to repair anew to this fountain to quaff again of the ancient delirium and to revive its potent spell. – Charles Egbert Craddock, "A Victor at Chungke"

I spend a lot of time studying maps and I’m learning that you can find lots of interesting things happening along the divides that separate one river basin from another. That’s certainly true in Jackson and Macon Counties where the meandering line of the eastern continental divide separates the Tennessee River basin from the Savannah River basin.

Somewhere, not far from that divide, is a place called “Herbert’s Spring” and I’m trying to find it. Mary Noailles Murfree (under the pseudonym Charles Egbert Craddock) made several references to the spring in her 1900 short story, A Victor at Chungke. Almost certainly, the author had read of Herbert’s Spring in James Adair’s History of the American Indians, published in 1775.

Adair was a trader and agent among the Cherokees and other Southeastern tribes during the eighteenth century. His was apparently the first written report that those who drank the waters of Herbert’s Spring would be unable to leave the Cherokee country for seven years. More than a century later, James Mooney reprinted Adair’s account and added a note concerning the possible location of Herbert’s Spring:

The subject of this old trader’s legend must have been one of the head-springs of Chattooga river, an upper branch of Savannah, having its rise in the southern part of Jackson county, North Carolina, on the eastern slope of the ridge from which other streams flow in the opposite direction to join the waters of the Tennessee. It was probably in the vicinity of the present highlands in Macon county, where the trail from Chattooga river and the settlements on Keowee crossed the Blue ridge, thence descending Cullasagee to the towns on Little Tennessee.

It seems to me that Mooney has made a crucial error in placing Herbert’s Spring on the headwaters of the Chattooga (Savannah River basin), considering that Adair himself wrote that the spring was just across the divide, on the headwaters of a river flowing toward the Mississippi (at that time French territory).

From the head of the southern branch of Savannah river it does not exceed half a mile to a head spring of the Missisippi water that runs through the middle and upper parts of the Cheerake nation about a northwest course, and, joining other rivers, they empty themselves into the great Missisippi. The above fountain is called 'Herbert's spring,' so named from an early commissioner of Indian affairs, and it was natural for strangers to drink thereof, to quench thirst, gratify their curiosity, and have it to say they had drank of the French waters.


Some of our people, who went only with the view of staying a short time, but by some allurement or other exceeded the time appointed, at their return reported, either through merriment or superstition, that the spring had such a natural bewitching quality that whosoever drank of it could not possibly quit the nation during the tedious space of seven years. All the debauchees readily fell in with this superstitious notion as an excuse for their bad method of living, when they had no proper call to stay in that country; and in process of time it became as received a truth as any ever believed to have been spoken by the Delphic oracle.


One cursed, because its enchantment had marred his good fortune; another condemned his weakness for drinking down witchcraft, against his own secret suspicions; one swore he would never taste another such dangerous poison, even though he should be forced to go down to the Missisippi for water; and another comforted himself that so many years out of the seven were already passed, and wished that if ever he tasted it again, though under the greatest necessity, he might be confined to the Stygian waters.


Those who had their minds more enlarged diverted themselves much at their cost, for it was a noted favorite place, on account of the name it went by; and, being a well situated and good spring, there all travelers commonly drank a bottle of choice. But now most of the pack-horse men, though they be dry, and also matchless sons of Bacchus, on the most pressing invitations to drink there, would swear to forfeit sacred liquor the better part of their lives rather than basely renew or confirm the loss of their liberty, which that execrable fountain occasions.

So, while I’m willing to give some weight to the words of James Mooney, I can’t help but consider Silas McDowell’s silence on the subject of Herbert’s Spring. 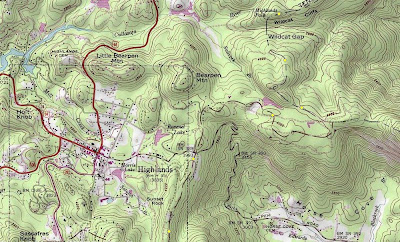 Click on map to enlarge. Is Herbert's Spring on this map? The eastern continental divide, separating the Savannah River basin from the Tennessee River basin, is indicated by the dashed line marked with yellow diamonds.
Posted by GULAHIYI at 12:02 AM

This was an interesting article. I have no idea where Herbert's Spring is located, but now will have to go look for it. I would like to experience the delirium of its waters.
Jim Cox