Only recently, I learned that the ambassador and keeper of Panthertown Valley died on July 20, 2007. Carlton McNeill was 86 years old and had lived the last few months of his life in a Cary rest home, but for many people, he was inseparable from Panthertown, living in a modest home at the east entrance to the treasured place.

On my first visit to Panthertown, Carlton appeared out of nowhere and helped me find Schoolhouse Falls. There’s no telling how many other hikers he assisted during his years in the valley. I posted the following tribute on December 14, 2006, a memory of hiking with Carlton 14 years ago.

I’ve been thinking lately about the importance of picking wild fruit. It is a mark of deep impoverishment when that job goes undone. Especially when it's all but impossible to find better employment.

So the letter in this week’s Cashiers Chronicle caught my attention:

Dear Editor,
Who will pick the berries this summer? Not Carlton. He is all tucked in at the Chatham Creek Rest Home, near Raleigh. But his legend lives on.

Rarely do you remember the date that you met someone, but I can say for certain that I met Carlton McNeill on August 28, 1994. I was about to walk out the door for my first hiking trip to Panthertown Valley when the telephone rang with the news that my father had died.

Given his love of the outdoors, my father would have wanted to see Panthertown, and I knew the only right thing to do under the circumstances. I went hiking.

Before I made it halfway around the valley my path crossed that of Carlton. As soon as I met him, I knew I’d never forget him. And so it was for today’s letter writer:

Many of us remember the cantankerous, opinionated, indefatigable, puppy-friendly old man who lived in a half-singlewide at the old entrance to Panthertown Valley? The man who found almost every lost hiker in the valley, who created trails wherever they seemed needed, who remembered everyone’s name, their children’s names and where they’d been on hikes and with whom they’d hiked. The man whose religion was the forest and the yellow lady’s slippers and Thomas Paine. The man who picked all the blackberries and blueberries he could find - gallons full - and gave them away, making sure that folks at nursing homes and shelters got their share.

I recall how we walked over the bare rocks of the valley and almost stepped on a young rattlesnake. That and how Carlton took the time to lead me to Schoolhouse Falls. After a while, though, our paths diverged and Carlton left me with his business card and good wishes. It was the last time I ever saw him.

How proud he was of Burt Kornegay’s map and brochure that named Carlton as the “surreptitious trail blazer” and of the sign on the road leading down from the altar proclaiming “Carlton’s Field of Ferns.”

So now there’s a job vacancy at Panthertown, and I know where to go berry picking next summer. It’s the only right thing to do under the circumstances.
+++
Rich Stevenson, creator of the NC Waterfalls website, posted the news of Carlton’s passing and quoted a Sam Foss poem, one of McNeill’s favorites:
There are pioneer souls that blaze the paths
Where highways never ran-
But let me live by the side of the road
And be a friend to man. 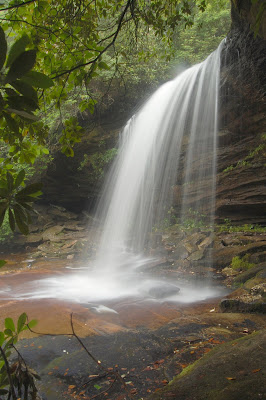 Schoolhouse Falls, Panthertown Valley, July 2008
Posted by GULAHIYI at 10:33 AM