A Rice Farmer and A Raccoon 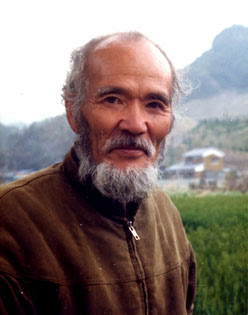 Extravagance of desire is the fundamental cause which has led the world into its present predicament. - Masanobu Fukuoka

For someone who favors big ideas and high ideals, the real world can be a rude awakening. Though this story took an unexpected turn, it started out as a tribute to Masanobu Fukuoka, who died Saturday at the age of 95. What surprised me was not that he had died, but that he had been alive all this time. Many years ago, when I picked up his books, I thought of him as an ancient and wizened character, although he doesn’t seem nearly that old when I look at the same photos today. Fukuoka wrote an introduction to natural farming, called The One-Straw Revolution. After reading the book, I’d not kept up with him, although I appreciated his perspective.

Fukuoka addressed not just farming, but diet, health, cultural values and the limits of human knowledge. His approach was to observe nature and submit to nature while growing the best food with the least effort. He alternated from dispensing practical advice on raising rice, winter grain, citrus fruits and vegetables on his Japanese farm, to dispensing axioms for a new philosophy of farming:

When it is understood that one loses joy and happiness in the effort to possess them, the essence of natural farming will be realized.

In serving nature all is well.

No matter how the harvest will turn out, whether or not there will be enough food to eat, in simply sowing seed and caring tenderly for plants under nature’s guidance there is joy.

I intended to celebrate the big ideas and high ideals of Mr. Fukuoka by sharing many more of his bon mots, but fate intervened. The corn crop in my garden finally reached maturity. All summer long, I’ve been anticipating fresh-picked corn, cooked to perfection and slathered in butter. The time has come. I know it. The raccoons know it. And my fidelity to Fukuoka’s precepts is being tested.

I do try to humble myself and yield to nature, even if it requires sacrifice. For instance, I don’t know of anything that compares to fresh-baked wild blackberry pie. Summer is not summer until I’ve picked a pail of those beauties and transformed them into pie. I’ll even go this far. If capital punishment is implemented for bad puns, the first item I’d request for my last meal would be a piping hot slice of blackberry pie. Even so, I accept that the flocks of turkeys will come through and pluck most of the blackberries just before I get to them. As much as I crave the berries, I don’t mind the turkeys taking a big share. 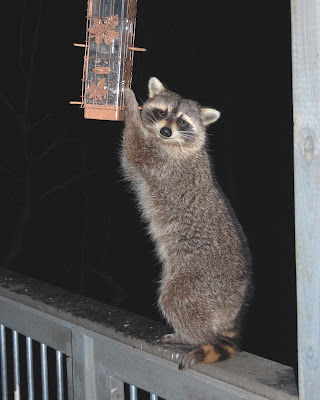 When it comes to raccoons marauding my corn patch, I draw the line, finding no consolation from Fukuoka’s adage, “In serving nature all is well.” I’ve seen the damage that coons can inflict on a corn crop in one night, and I don’t want to see it again. Raccoons are ingenious and persistent critters. Several months ago they made a habit of pilfering my bird feeder every night, an easy problem to solve by bringing the feeder inside at night.

Separating raccoons from sweet corn is not that simple. I found a zillion blog posts, from just the past week, concerning hungry raccoons tearing up corn patches. In fact, a new YouTube video features a Canadian grower’s examination of his devastated corn patch. He claims to be exasperated with the coons, but expresses it with such laconic fatalism: “Within walking distance is acres of cow corn, but they won’t eat that, no, no. They want the sweet corn, but I guess you can’t blame them. Oh well. That’s life.”

I lack the equanimity to shrug it off that easily. If I don’t act soon to foil the raccoons, they’ll get bolder and bolder. They’ve already taken three or four ears, but that was just a scouting run. I know they could take three or four dozen ears in one raid. So I’ve asked for advice and found lots of sympathy. One friend uses a live trap baited with sardines. Another friend suggests a taller fence. Another friend tells me to get reinforced packing tape, and securely tape each and every ear, strapping them to the stalk. (Instructions for that method here.) Another friend has a coon-hunting brother-in-law and says she’ll call him to see if he’ll run his dogs at my place.

I’d like to think dogs would be useful in this situation. I’d like to think my neighbor’s dogs would do the job. If I go skulking around in the dark to visit my garden, the neighbor dogs perk up and start barking at me. But as a night visitor within earshot of those dogs, I’m less familiar than the raccoons who’ve managed to ingratiate themselves and no longer set off the frenzied barking.

I considered going to the pound, to rent a dog for a week or two. I’d keep him penned in the garden to scare away the coons, and then take him back. But I don't think the pound would go for it.

I brainstormed for other solutions. Running the sprinkler all night? Motion detector lights? A radio in the corn patch…in case the dulcet tones of the BBC announcers would repel the raccoons at 3:00 in the morning?

Perhaps I shouldn’t feel so hypocritical for turning my back on Fukuoka’s generous faith in nature. I’ve worked too hard for this corn to let a pack of semi-rabid raccoons steal it all away. But maybe Fukuoka has the answer, after all, with his advice to submit to nature.

I could start a new summer tradition, and every year, when the corn begins to ripen, I could pitch my tent in the garden. I could build a campfire, read Fukuoka, watch the moon rise, count the stars, roast hot dogs, roast marshmallows, sing cowboy songs, play my harmonica, frighten myself with ghost tales, listen to the corn grow, and keep the raccoons scared away. All the usual campfire things. I could be night watchman until every ear is safely harvested.

That’s how I could go back to the garden, get closer to nature, follow the example of Masanobu Fukuoka, stymie the raccoons, AND harvest all that corn. Like Fukuoka always said:

Natural farming arises of itself when a unity exists between man and nature. It conforms to nature as it is, and to the mind as it is. It proceeds from the conviction that if the individual temporarily abandons human will and so allows himself to be guided by nature, nature responds by providing everything. The ultimate goal of farming is not the growing of crops, but the cultivation and perfection of human beings.

Not that I expect it to happen, but if I were half as perfect as an ear of sweet corn straight from the garden, that would be mighty perfect indeed.