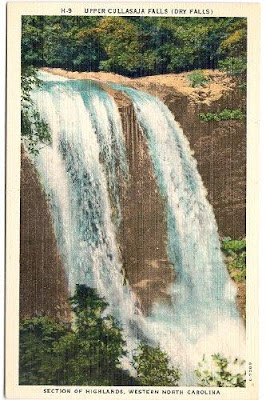 For about a year now, one of the most memorable waterfalls of the Southern Appalachians has been inaccessible. The Forest Service is rebuilding the parking area and trail leading to Dry Falls on the Cullasaja River between Franklin and Highlands and the site will remain closed for a few more months.

Edward King and several of his companions traveled up the Cullasaja Gorge in 1873, and he wrote in considerable detail about their visit to Dry Falls:

By and by, in the afternoon, the reunited party, as it crept skyward, plunged, Indian-file, into the forest, and took its way to the " Dry Falls." A silence, not of gloom but of reverence, seemed to fall upon all as we entered the aisles of the grand wood, and climbed the knolls which rose like whales' backs every few hundred yards. …

After two miles of climbing, sometimes where the hills were so steep that in descending a misstep of the horse would have cost one a broken limb, we came to a long line of laurel thicket. Here, taking our oil capes, we scrambled into the bushes, and, stooping, worked our way to a cliff, down which rugged steps were cut, and stood where we could overlook the canon into which the upper fall of the Sugar Fork sent its leaping water. 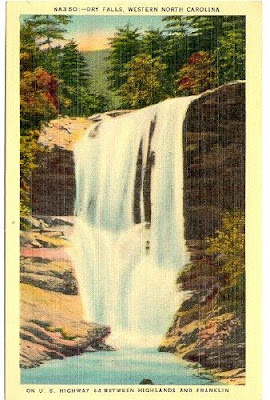 The Hibernianism by which this glorious cascade gets its designation of the "Dry Falls," was suggested by the possibility of passing beneath the giant shelf, over which it pours, without severe wetting, although the spray is at times blinding. The river, coming to a dizzy height, leaps out with such force, that the water is projected far from the rock, and the beholder seems to see a lace veil, at least sixty feet long, dependent from the hoary walls of the canon.

Passing under it, along the slippery rocks, one comes out upon another stone under beetling precipices, from which little streams run down, and around which the mist and spray rise, and can note the changing gleams of the sunshine as they play on the immense mass of foam suspended between earth and sky.

Below, the stream passionately clutches at the rocks, and now and then throws them down into the chasm; there are hollows in the stones, which have been worn to a considerable depth by the pattering of the spray upon them for hundreds of years. Here a mass of wall rises dozens of feet from the chaos of rocks which is huddled at the fall's bottom. Many of the rude figures seem to have human resemblances, and one might imagine them giants rising from the canon's depths to tear away the veil which has been drawn across the entrance to their cavern. 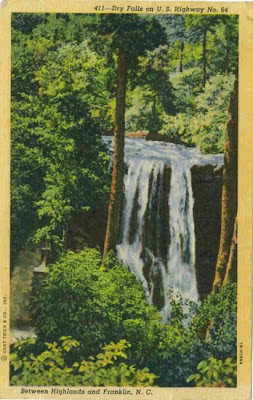 A hundred and fifty feet below the summit of the falls, the stream runs on in whirlpools and eddies, now forming into inlets in which reeds, ferns and blossoms flourish, and now making a deep, steady current, cold and crystal clear. The pines and spruces seventy feet high seem but toys by the sides of these immense walls ; the light, too, in the gap through the mountain, is strange and fantastic, and seems to cast a glamour over every minute object. Even the pebbles, and the ferns and tiny grass-sprouts in the soil beneath the shelf over which the fall pours, are purple.

Then the voice — the voice of the fall! Heard from the laurel thicket, it seems to come from the very ground under your feet ; heard from the cavern into which you pass, it is sombre and complaining, like the winter Wind about the house chimneys ; and its echoes from the foot of the rapids, to which you may descend if you have firm nerves and a quick step, are like those from some unseen choir in a cathedral gallery, — some chant of priests at High Mass, monotonous, grand, inspiring ; " the height, the glow, the gloom, the glory," all blended, shock and awe the soul.

Here is a fall upon whose virgin rocks no quack has painted his shameless sign ; whose precipices have not been invaded by the mob of the grand tour ; whose solitary magnificence thrills and impresses you as if in some barren land you came upon the dazzling lustre of a priceless diamond. But to this, and its brother a few miles below, the feet of thousands of the curious will hereafter wander. 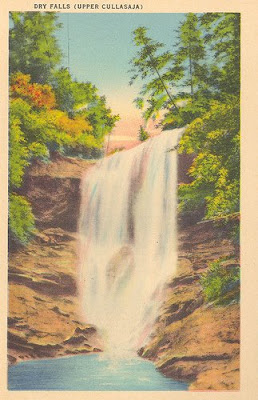 Your presentation of the post cards with the observations of King
makes for a wonderful experience.

I'm looking forward to more of this art form- and to my next trip to the falls.

Thanks, and a happy first weekend of autumn to you. King's 19th century writing style might be a little over-the-top, but I enjoy it. Could it be that Ed King and the people of his time saw the world through different eyes than we do today?

John Lyon's botanical explorations took him along the Cullasaja in 1807, and I've been trying to retrace his footsteps this morning.

Cullasaja gorge is one of my most favorite places in the world. I can only imagine what an expedition to this place was like before US 64 made it a piece of cake to get to the river. Brave people.

There are several cars down there next to the river that fell off the cliff. When it rains in Highlands and the sticks are in the water, make sure you get out of the creek on the left hand side. Otherwise, you'll never get out of there. great post.