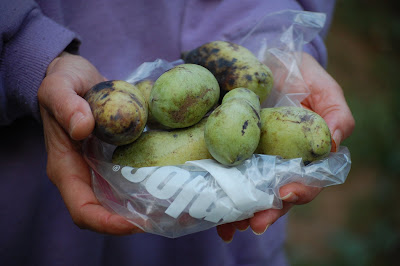 You can spend years doggedly searching for something and never find it. Then, when you turn your attention to other pursuits, you find it after all.

Twenty years ago, I got interested in paw-paws, and discovered them to be quite elusive.

I collected reports about paw-paw sightings and set out to track them down, but without success.

I went to the woods and called out for "Paw-Paw", "Indiana Banana", and "Custard Apple". I never got an answer. I never heard, " Come pick me!"

I considered taking a trip to the Ohio Valley, because I read they were common in the farmers’ markets of that region. But that was just too far.

I ordered the trees from a nursery, and planted them in a choice spot. They promptly died.

I wondered if I would ever sample what has been described as "the largest edible tree fruit native to the United States" (at over one pound per fruit). I could only imagine the flavor, variously described as a combination of apple and banana, or as a blend of banana, mango and pineapple.

That all changed the other day. My brother and I had explored an enormous old barn and were walking toward a nondescript cabin by a rushing stream when I saw some egg-sized green pods scattered on the ground. Looking up, I saw the nondescript tree holding still more of these pod-like objects. At first I thought they were nuts of some kind, inside oblong green husks. But they weren’t walnuts. They weren’t butternuts. They weren’t pecans.

They weren’t nuts at all. There’s only one thing they could be. I exclaimed… 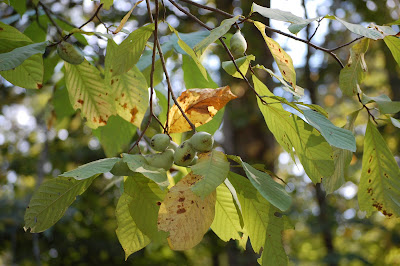 My long search had finally come to a conclusion. I picked one up, broke it in half and started nibbling at the fruit.

Hmm…not bad. Not bad at all.

I scrambled around and gathered up all the fallen paw-paws I could find.

What a red-letter day!

With the availability of other fruits, the paw-paw has faded into relative obscurity, but it has a long history in the gastronomy of frontier America. The chilled fruit was a favorite dessert of Thomas Jefferson. If it was good enough for TJ, it’s good enough for me.

Several years ago, various medicinal qualities were ascribed to the paw-paw. An extract of compounds from the fruit became popular as an alternative cancer treatment. Apparently, acetogenins in the paw-paw reduce the growth of blood vessels that nourish cancer cells and inhibit the growth of multiple drug resistant (MDR) cells. According to a Purdue researcher, no other cancer treatment has shown any effectiveness against MDR cells.
http://alternativecancer.us/pawpaw.htm

In the 1990s the potential of paw-paws as a commercial tree fruit crop gained attention and the horticulture research program at Kentucky State University has concentrated on rasing the paw-paw successfully.
http://www.pawpaw.kysu.edu/KSUstory.htm

The KSU researchers told of a nearby restaurant that features the paw-paw in many of their dishes:
Chefs at the Oakroom, a AAA five-diamond restaurant at Louisville’s Seelbach Hilton, have developed a menu of Appalachian cuisine, which includes pawpaw. The menu includes a pawpaw and green tomato relish on a French rib pork chop, pawpaw sorbet, and a Pawpaw Foster with pawpaw ice cream (made by Bray Orchards) for dessert. The Pawpaw Foster consists of flambéed pawpaw and banana using ginger liqueur (wild ginger is indigenous to Kentucky) over pawpaw ice cream. The Oakroom has also begun serving a pawpaw brandy.

More than a century ago, one writer paid tribute to the paw-paws of his youth:
We can never realize what a great blessing the pawpaw was to the first settlers while they were clearing the great natural forest and preparing to build cabins. Planting fruit trees was rather an experiment for a number of years. The pawpaws, and a few other wild fruits of less value, were all their dependence so far as fruit is concerned. Well do I remember sixty or more years ago my father would take his gun and basket and go to the woods and return in the evening loaded with pawpaws, young squirrels and sometimes mushrooms of which he was very fond. But there will never be a recurrence of those days which were the happiest of my life.
- James A. Little, The Paw Paw, 1905.

Now, I have a handful of paw-paw seeds. I’m guarding them carefully until I can plant them carefully. Then we'll see what happens.

You never know. The day might yet come when I can amble around, way down yonder in the paw-paw patch, and return home with a basket full of the delectable fruit. 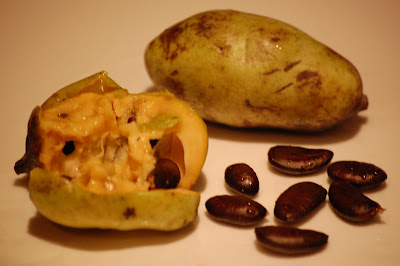 congrats on the catch. i should visit my patch, i am afraid it may be too late this year. every-body-luvva-da-paw-paws. esp the deer.

I'll bet they do. You know, people must have had much larger pcokets back when that song was passed along. I tried stuffing a few paw-paws into the pockets of my Levis and it was a nothing but a mess.

I remember making paw paw wine with my father from the trees behind our house. I just found some at my local farmer's market... really wonderful! A great native tree and should be grown more often in residential landscapes.

Thomas Jefferson grew over 100 differnet types of vegtibles. Where did they all go?

I haven't come across any here and it's a shame. People talking about Paw Paws always reminds me of my Maternal Grandfather. Us yougins called him Paw Paw. Everybody else called him Cheif.

Appalachianist, I'll bet you've read Jefferson's Garden Book. It was fun to get to Monticello after reading it since they are trying to grow some of the old varieties on that teraced garden on the mountain. The one that sticks in my brain is "Tennis Ball Lettuce" that TJ grew and that they still grow.

He went all over Europe to find upland rice. And mountain farmers actually grew it some, way back in the early 1800s...it didn't require paddies. A friend gave me some upland rice starts a few years. It grew and made rice, (not even enough for one helping), but I liked watching it grow.

For me it was Pap-Paw and Mam-Maw. I must have shelled a million butterbeans on their front porch.