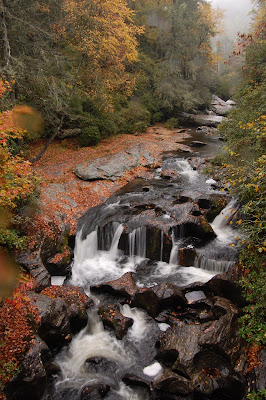 Call me greedy, but I’m getting to the point where I don’t want to talk about my favorite places in the mountains. Some things are best kept secret, lest throngs of visitors descend upon them. But at the risk of contributing to that traffic in some tiny way, I can’t resist talking about the Chattooga River.

I’ve not had a particularly successful season of fall photography. When the pictures turn out "blah" I can always resort to my standard, "The light just wasn’t quite right that day." That’s a lot easier than acknowledging my creative and technical deficiencies. So, on this rainy October afternoon, I decided to go for as close to a sure thing as I know: the Bullpen bridge across the Chattooga River. I arrived there under my favorite lighting conditions, a steady drizzle, and commenced to shooting. (Apologies to my poor mistreated Nikon.)

Intending to pluck out some tidbit of Chattooga lore to accompany these photos, I turned to James Mooney and what I have touted (ad nauseum) as the most indispensable book ever written about the place we inhabit, his Myths of the Cherokee.

Once again, Mooney came through, with his reference to Tsatugi as the name commonly written Chattooga or Chatuga. Mooney offered possible Cherokee derivations:

From words signifying respectively "he drank by sips," from gatugia…or "he has crossed the stream and come out on upon the other side," from gatugi.


But according to Mooney, Tsatugi was a name of foreign origin, specifically from the Creeks who laid claim to at least a portion of the Chattooga River during the first half of the eighteenth century. More often than not, the Cherokees contested the claims of the Creeks in North Georgia and Western North Carolina:

The ordinary condition between the two tribes was one of hostility, with occasional intervals of good will.


Mooney listed several place names reflecting the former presence of Creeks, among them Coweeta, Tomatola, Coosa, and Chattooga. All this time I had never thought that Chattooga, or those other names, might be anything other than Cherokee.

So much for today’s toponymy lesson. While perusing this topic, I discovered another bit of Chattooga trivia. In June 2002, some Atlantans travelling the Chattooga made a remarkable discovery. An odd-shaped log protruding from the riverbank was, in fact, a 32-foot long dugout canoe constructed in the Cherokee style, but with metal tools. Carbon dating of the yellow pine canoe suggests it was crafted around 1760. The ancient canoe is on display at the Oconee Heritage Center in Walhalla, South Carolina. Now that I’ve learned about the old canoe, it’s gone straight to the top of my list of things to see in Walhalla.


Canoe photos and more at: http://www.oconeeheritagecenter.org/index.php?option=com_content&task=view&id=3&Itemid=1 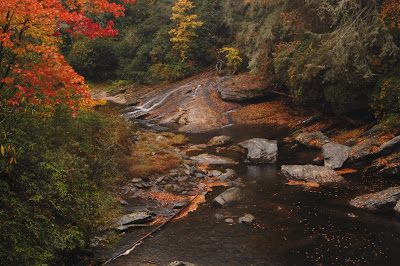 first of all, those are outstanding shots. Second - THANKS again for teaching me more about this areas history. I'm going to look into that book.