A Good Year for Acorns?

The creation of a thousand forests is in one acorn.
– Ralph Waldo Emerson

Acorns were good until bread was found.
– Francis Bacon 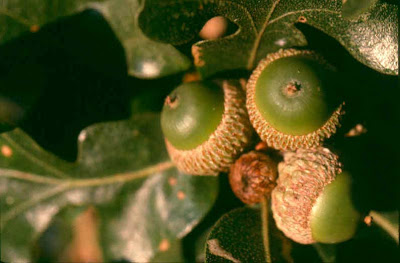 It’s not surprising to read some news story about a troubling symptom of environmental malaise. But I was surprised to read a recent Washington Post story about the disappearance of acorns. As reported in Acorn Watchers Wonder What Happened to Crop (11/30/2008), Arlington County (VA) naturalist Rod Simmons observed an unprecedented absence of acorns and hickory nuts this fall. He was so alarmed he began quizzing his colleagues about the shortage. From Nova Scotia through New England and as far as the Midwest, the story was the same. No acorns!

And that’s what I found surprising. In fact, I had commented to a friend several weeks ago that Western North Carolina seemed to have an unusually abundant mast crop this year. The Washington Post article is a tad alarmist, raising concerns about climate change and starving squirrels. In fact , the fluctuations in acorn production are a normal, and by most measures, a desirable phenomenon.

It’s a well-known piece of Tar Heel folklore that when oaks have an especially heavy crop of acorns, it will be an especially cold winter. However, some people who've taken note of that indicator would tell you that acorns are a poor predictor of winter weather.

While browsing for more acorn facts, I found a discussion of the mast cycle and an interesting theory:

If oaks produced a consistently healthy crop of acorns every year, populations of nut-loving animals would rise to the point where all the acorns would be eaten no matter how numerous. None would remain to grow into mighty oaks.

This suggests the on again/off again cycle of acorn production is adaptive, ensuring the survival of the oaks. The same discussion mentions a long-standing symbiotic relationship between oaks and people:

Foresters and wildlife biologists are recommending that oak forests be managed to encourage new oak growth, which might involve prescribed burns and selected cutting.

"The idea of putting a fence around this and letting nature take its course isn't going to work for oaks," [Smithsonian scientist Bill] McShea says. "It's going to take active management."

"If the oak forest goes to maple and birch and yellow poplar, why does it matter? It matters because the wildlife that we enjoy in eastern forests, that whole vast community, is dependent on hard tree seeds, and that's been true for 10,000 years."

I went hunting Saturday on Tanasee Ridge and Hickory Nuts were still hanging in the trees. On most high ridges I've been on this year, they have plenty of Acorns. I encountered a couple of bearing Chestnuts as well.

Everybody knows I'm a fan of controlled burning. We could use allot more of it here in Southern Appalachia.

Controlled burning has a long and honorable history in these mountains. I need to dig out an old, old passage where a traveller describes how things looked as a result of the annual burn. It was a different landscape.

Lots of places around the country have lots of acorns this fall. I think the Post reporter went a bit off the deep end, though I don't doubt it was an off year in that region.

Wha, wha, wait a minute. Chestnuts? Real chestnuts? And not those spiny Chinese chestnuts? How big are these trees anyhow? I know some people have been doing lots of good work breeding back a resistant variety of the old chestnuts. That would be good to see.

All Chestnuts are prickly. But, these are American Chestnuts. I found maybe four that bared Saturday. Only one seemed to be holding up against the blight so far. I volunteered a day to TACF once and I need to give them a call about the one tree. I know where there was one about 25' or more tall at Butter Gap here in Transylvania a few years ago. A little trail went to it like it was a mecca. But, this one Saturday is as tall and not hard to get to.

I live in Clay County NC and we have had ACORNS like I have never seen. They fall and hit our carport and sound like a gun shot scaring me awake at night. The ground has been oovered around our house and yard with huge acorns, so numerous it was difficult to walk on our driveway.
Seems to me this has been the biggest crop of acorns I've seen in ten years.

Chestnut was a preferred wood for many purposes once- I stand to inherit some heirloom chestnut furniture. Strong and straight, and works very honestly, Im told.

BTW the hybrid chestnut at the Kron place at Morrow Mountain is now gigantic and bears heavily.


If oaks produced a consistently healthy crop of acorns every year, populations of nut-loving animals would rise to the point where all the acorns would be eaten no matter how numerous. None would remain to grow into mighty oaks.


Is this not implying that there are periodic shortages of nuts to control the animal population?

Of course one has nothing to do with the other. The trees could and should produce healthy crops every single year. Biologically it makes sense, it increases the chance of survival.

Thanks for letting me say something.

I hope that makes it more clear. Thanks for the comment.

I've been reading some about this, and was coming back to say that I clearly don't know what I'm talking about. You're right about the variable production, I think we're saying the same thing.

My first reaction was "how on earth would the tree even know what happened to the acorns?" but after reading about the wide range of factors affecting production (or just birds / wasps getting to the acorns before they even fall) it makes a little more sense.

It's an interesting phenomenon. What really strikes me is how the DC area (and much of the east) had almost no acorns, while we had such a heavy crop here in the Southern Apps this year. I knew about year-to-year fluctuations, but I was surprised that a few hundred miles would make such a difference within the same year. That was really the crux of my observation.
Anyhow, I'm glad we got clear...I'm sorry that I was snippy about it.