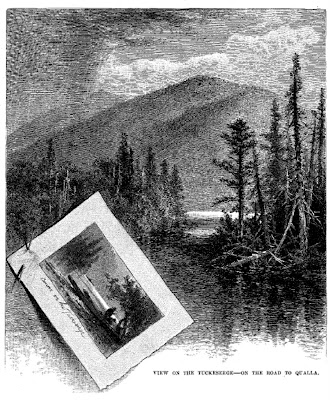 For many years, I’ve been interested in how these mountains have been depicted, visually, for outside consumption.

The airbrushed images in brochures and websites promoting gated golf-course communities are just a recent example of a long tradition. A century ago, railroad companies published gorgeous pamphlets encouraging travel and tourism in the mountains. In between, we’ve seen everything from linen-style penny postcard views to stereoscopic Viewmaster reels of the Blue Ridge Parkway, Cherokee and the Great Smoky Mountains National Park.

I’m especially curious about the illustrations in nineteenth century works on the Southern Appalachians, works published before photography was widely used in such books and articles. For millions of people, these were the first images of the southern mountains they had ever seen.

Last year, I posted a story about the artist J. Wells Champney, who accompanied the writer Edward King on an 1875 trip through the mountains and through Webster and Cashiers.
http://gulahiyi.blogspot.com/2007/12/his-friends-called-him-champ.html 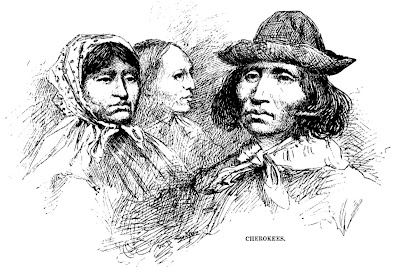 Some of my favorite illustrations from that era appeared in a Harper’s Magazine article written by Rebecca Harding Davis (By-paths in the Mountains, III, September 1880), and I’ve included just three of them in this post. The drawing at top shows the Tuckasegee (Tuckaseege) River near Qualla. The next drawing is of three Cherokees. And at bottom is the Waynesville prison.

In Davis’ story, the travelling companions had visited some of the more remote portions of the mountains before returning to Waynesville:

They returned to Webster, and from there to Haywood County. A day or two later, when they were snugly ensconced again with good Mrs. Bright in their favorite village of Waynesville, the Judge caught sight of a prisoner whom an armed man was escorting into the lonely little jail, which stood in a field overgrown with golden-rod at the end of the hamlet…. 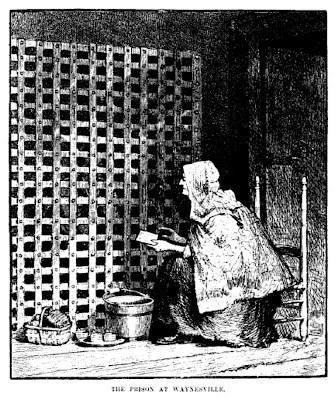 More images to be posted soon; meanwhile I'm seeking details on the artists who created these illustrations for Harper’s.
Posted by GULAHIYI at 12:03 AM

Your love of the remnant details of the past history of your place, the exploration, the careful research, your obvious love for all of this is fascinating to read about and will be of increasing value as the past becomes more inaccessible. I just discovered Ruminations this weekend and I'm amazed at what you're doing with it. For me, your work strongly recalls the novels of Charles Frazier.