Legends of the Falls, I

"Once upon a time there was a lovely Cherokee maiden…." 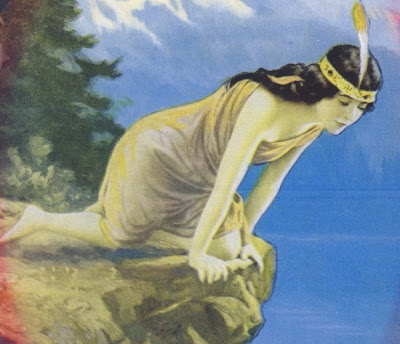 These Cherokee maiden stories annoy me. I think it’s because, when you scratch the surface, you’re more likely to find racist misogyny instead of any historical basis for the stories. But what else would you expect from the old white guys who concocted these legends?

It would be easy to fill a book with examples of this genre, though. Robert Frank (Jarrett House) Jarrett’s lovely Cherokee maiden, Occoneechee, has made a notable appearance on this blog, and so have the lovely strawberry-picking maidens admired by William Bartram. Just last week we had a virtual visit to the final resting place of the lovely Cherokee maiden, Trahlyta. Princess Cornblossom drew a passing mention here. We have yet to check in on the lovely Cherokee maidens Jocassee and Connestee. And the tourist attraction, Blowing Rock, is known for the legend of another lovely Indian maiden (either Creek or Chickasaw) who fell in love with a Cherokee brave. 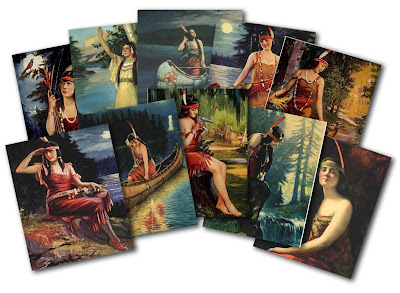 One writer, commenting on the archetype, called these Indian maidens "exoticized embodiments of Nature." 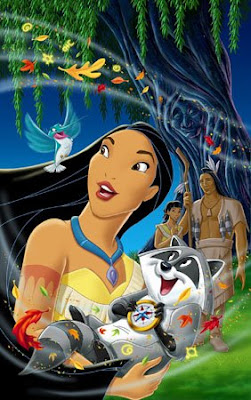 OK. That’s about as far as I intend to ride THAT horse. Plenty of scholars and activists have written solid critiques of the "Indian Maiden Stereotype." It’s not pretty. Not pretty at all. 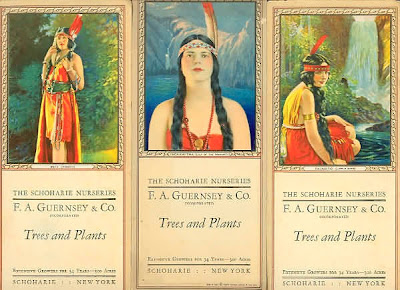 Anyhow, what got me thinking about this was a visit to Issaqueena Falls, north of Walhalla, South Carolina. When you arrive at the trailhead for Issaqueena, you’re greeted with an exhibit that explains the legend of the lovely Indian maiden, Issaqueena:

Local stories about this site involve variations from the poem, "Cateechee of Keowee," a story of love and adversity penned by J.W. Daniels, A.M., in 1898. The following is a summary of Rev. Daniels' poem, which thrust Issaqueena into immortality. This beautiful waterfall is named for a Creek maiden called Issaqueena. There are many legends about Issaqueena. The most popular story tells how as a girl Issaqueena was captured by the Cherokee and given the name Cateechee. As a young woman she met and fell in love with a white trader named Allan Francis.

One day she overheard a plan by the Cherokee to attack the settlements on the frontier. To warn her lover, she found a swift pony and rode 96 miles to his trading fort. As she traveled, Issaqueena named the landmarks she crossed on her way -- Six mile Mountain, twelve Mile River, Eighteen Mile Creek, and others on her way to her final destination at Fort Ninety-Six.

Fearing retribution from the Cherokees, Issaqueena remained with Allan, eventually marrying him. In time, she, Allan, and their newborn baby moved back to Stumphouse Mountain where they built their home.

One day, the Cherokee Chief, angered with the white settlers, sent his warriors to capture Issaqueena. Issaqueena saw them coming and ran toward the waterfall to escape capture. Knowing that the Cherokee believed evil spirits lived in waterfalls, she pretended to leap to her death. She hid on the ledge below the top of the waterfall where she remained until it was safe to rejoin her family. Her dramatic escape began the legend of Issaqueena Falls. 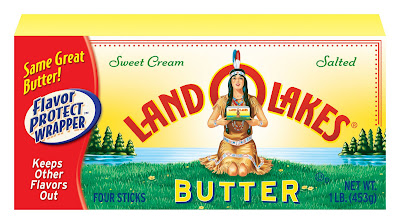 Ho-hum. Yet another legend of a lovely Indian maiden and a waterfall? But a story by Buzz Williams, posted on the Chattooga Conservancy website really caught my attention. In Trailing Issaqueena, Williams traces the long and twisted evolution of the Issaqueena legend and some of the actual events that figured into the tale. It’s a great article, so I won’t attempt to rehash it here and fail to do it justice:
http://www.chattoogariver.org/index.php?req=issaqueena&quart=Sp2007 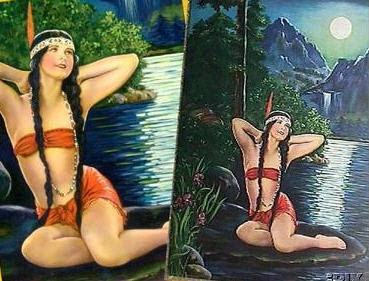 I could not find a copy of Mr. Daniels’ poem, "Cateechee of Keowee.” However, I did locate a similar work published in 1896.

Cateechee, the Indian Maiden
From Palmetto Lyrics, by Francis Muench.

FROM the Broad to Oconee through the Cherokees' lands,
Rang the blast of the trumpeter-shell,
For these were their Chieftain Kuruga's commands:
"At the tide of the New Moon assemble your bands
From hamlet and mountain and dell,

And fall on the farms of the cursed pale face,
Upon Cambridge, their outmost frontier,
And sweep,—with the hurricane's blast through the space
With the rush of the flame mid a forest ablaze—
Every trace that they ever dwelt here!"

Cateechee, Kuruga's fair daughter, scarce heard
Of the murd'rous design of her clan,
When deeply her heart in her bosom was stirred;
Yet mustering her courage nor breathing a word
She resolved upon thwarting their plan.

For dwells not at Cambridge, Frank Allan, her friend,
Her teacher at school and her guide?
And on him should the tomahawk's vengeance descend?
No, no! 't is her duty his life to defend,
No matter what fortune betide!

So leaving her wigwam with the daylight's first ray
And turned to the rise of the sun,
O'er mountain and valley she traveled her way,
Till she reached the Saluda at noon of the day,
And she followed its southerly run.

Nigh foot-sore she entered a grotto's dim nave
When the Day-Star stood low in the West,
And she tarried o'er night in the hospitable cave,
And gratefully prizing the shelter it gave
She named it by "Traveler's Rest."

With the limpid Saluda again for her guide,
Unwearied the next day she strode.
Till she sighted the village at even's dim tide
And the well-known cot by the rivulet's side,
Where her teacher, Frank Allan, abode.

"Ah, thou here, Cateechee, so wan and so worn?"
Spake Allan, amazed at her sight.
"Thy footsoles a-bleeding from bramble and thorn,
Thy tresses dishevelled, thy vestiments torn,—
Oh, tell me the cause of thy plight!"—

"Full Ninety-Six Miles, as an eagle will soar,
I traveled to spread the alarm:
Ere stands yet the Moon in the heavens once more,
My brethren's dread war-whoop will ring at thy door:
Flee quick then to save thee from harm!"—

"Oh thanks for thy warning, thy timely report
That ransoms from peril our lives!
But to flee from the foe is a coward's resort,
Yet fear not, 't is time yet to build us a fort,
Ere the host of thy brethren arrives!"

And they builded a fort in the shape of a star
On the brow of a towering hill,
With bastions that bristled with engines of war,
And ramparts that loomed o'er the landscape afar
And baffled the enemy's skill.

"But"—questioned the toilers when the work was complete
And they rested their shovels and picks—
"What name shall be given this shelt'ring retreat?"
"None other,"—spoke Allan—"none other so meet,
So fit as the name 'Ninety-Six.' "

"For Ninety-Six Miles, as an eagle will soar,
This maiden conveyed the report,
That soon will the Indian beleaguer our door,
And seeming it is that the suff'rings she bore
Shall live in the name of the Fort!"

'T’is to marriage that every good story will tend;
No exception is ours to the rule:
And so, when the Indian blockade was at end,
Cateechee was married to Allan, her friend,
And whilom her teacher at school. 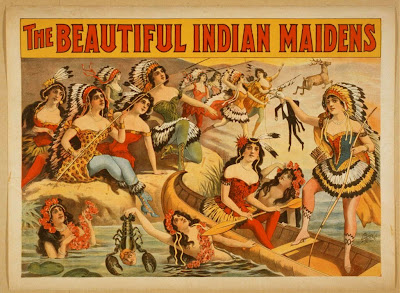 Nice opening plate. Reminds me of Psyche, the trademark of "White Rock" fame.

What better way to identify with Nature--savage, yet beautiful. I took a little walk yesterday beside the Little River (Elkmont). The water was up from the rain we've been having--great opportunities for post card photos. Yet you know it was freezing cold with a deadly powerful current. Things we humans have been contending with for thousands of years. Who will get the eventual upper hand? Probably Nature.

My Ex's people owned a great deal of what is now Lake Jocasee. Her Dad can tell allot of stories about that country down in there. Ironically, he helped build the lake. His dad believed the lake to be cursed. Of all the stories to cross their lips, Jocasee is not one of them.

Fire and flood. It's hard to grasp how the land has changed. Appalachianist, you mentioned the old role of burning, and I came across this description today of how it used to be in Transylvania:

When the first white men came they did not find virgin forests untouched by axe or saw, as one would expect. Rather the exact contrary was true. Except for one very small area near the present town of Cherryfield…there was not a tree [!] in any part of the territory now in Transylvania County . . . According to an old record, one of the first white settlers is said to have described the country as a “mountainous prairie.”


Mary Jane McCrary quotes Jones who said, “Fires had “swept the Little River Valley and the French Broad Valley at least as far up as Rosman, including the hills and mountains in the Island Ford and Connestee sections.” The Indians used fire, according to Jones, to make traveling easier through the rough terrain, to create better hunting grounds, and to shoot the wild game with bow and arrow at a greater distance. Jones points out that, “There has never been found in this territory any trees whose ‘rings’ disclosed a greater age than would be possible for it to attain by being planted after that time.” In 1915 Jones also recalls, “There are today men living in Transylvania county who have heard their grandfathers say they could remember when all the houses were build of very small saplings, much smaller than those usually used, for the reason that trees of suitable size could not be found.”