Night of the Panther 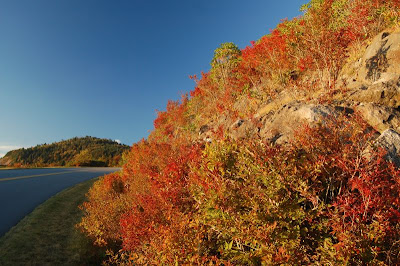 I enjoy a good panther story and I found another one in Wayne Kernodle's Harper's Magazine article from 1960. In "Last of the Rugged Individualists" Kernodle feigns cautious discretion when he speaks of a mountain community:

Perhaps it is best not to locate the place too precisely, because there is more than one Pin Hook Gap and more McCalls than the particular family I know. 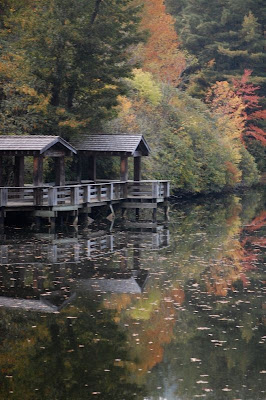 Hmm, let me guess, seeing as how I only know of one Pin Hook Gap...
Kernodle follows up with two paragraphs leaving no doubt about which Pin Hook Gap and, in turn, which McCalls he has in mind, before concluding coyly:
Pin Hook Gap is, roughly, in between the cities of Asheville, North Carolina, and Knoxville, Tennessee.
It is, of course, Jackson County’s Pin Hook Gap just off Highway 215 south of the Beech Gap on the Blue Ridge Parkway. That point established, I would be remiss if I failed to include the subtitle of the Harper’s article:

A favorite American folk hero - the Southern Mountaineer - is even saltier (and more dangerous) in fact than in legend but he is now sentenced to extinction. A farewell portrait by the chief anthropologist of William and Mary College.
Kernodle introduces us to the community:
The total population of Pin Hook is five McCalls plus an assortment of bears, panthers, rattlesnakes, and wild pigs.
Young John McCall, who is seventy-three years old, and his brother Charlie, who is seventy, live in a tight little cabin nestled into a cove under Devil's Courthouse. One brother and his wife live about two hundred yards away, and another hrother lives by himself in a shack about a half-mile back in the thicket…. 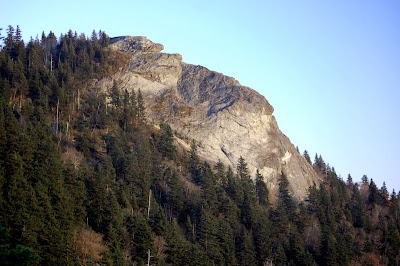 Hang on, there’s a story of a mighty struggle with a panther at the end of this! But Wayne Kernodle can set the scene:
Both men were tall-more than six feet-and thin, but they were not skinny. Their blue eyes were clear and sharp and their hearing was acute. They were confident men but not arrogant, cunning but not slick. They manifested a serenity unmatched by anything I have seen in the urban world. We talked about their life, which included some mining for precious stones, mica, and minerals.
With some prompting, Charlie told us about a long and ferocious struggle with a panther the winter before.
"This painter used that aire place up thar," he said, pointing out a promontory which jutted out from the balsam thickets about two thousand feet above the cabin. "He was driv by hungry and cold - hit ud been asnowin' fur a week a more. One night we heerd bangin' on the roof. We’uns tuk the rifles and got outside. He come aflyin' off the roof at us. We shot at him and he tuk off. But he come back later and was tearin' and clawin' at the windows and doors and all over the top of the house. Finally he tore a hole in the roof and come pilin' in. We fit him with arn bars and sticks and finally driv him outa the front door. John hit him in the hint leg and he'uns scremt and wailed like a dyin' hog. We haint saw him since. He had tore up the place baddest."
After several other stories about the McCalls, Kernodle reflects on impending change:

For "progress" is on its way to Pin Hook Gap. Thirty miles away from the McCall cabin you come out onto a good dirt road and to a little community in the valley. The people at the country store were talking about the engineers who had been making surveys for paving the road and connecting it with the Blue Ridge Parkway at Wagon Road Gap and thence to Routes 19 and 23. This will connect with Highway 441, which is known as the "Over the Smokies Highway," the most scenic route between Brevard, Waynesville, Newfound Gap, Gatlinburg, and Knoxville.
They were excited about the future and the new life it meant for them. And if you know something about the stringencies of their life, you can't blame them for looking forward to more money and the chance to buy the city things that ease the hardships. I just hope the engineers leave enough balsam, "rhododaniel," white spruce, and briar thickets between the road and the McCalls to drown out the whir of those great instruments of change, the automobiles, as they wind around Pin Hook on their way to the scenic beauties which await them at the parking lots of Tennessee Bald.
It is evident that this way of life is already doomed. Twenty-one years ago [1939], when I made my first intimate contact with the people of this region, the individualistic spirit was the first thing you noticed about the people you met. They were not special people like the McCalls that you had to go out of your way to find. They were most everybody who lived there and they simply did what was to them right and natural. 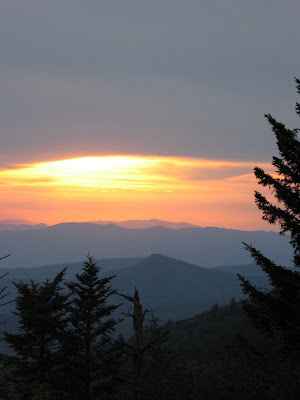 if you play your banjo long enough at the overlook where that Courthouse picture was taken, you might get a pleasant surprise.

do you ever write a bad blog post? this stuff is fantastic.

I second the above, sir; your work is superb. Hats off.

Hey,
That Wayne Kernodle is my father who passed away last March at the age of 100. Two years ago, he and I put together a compilation of his stories in a a book called The Last of the Rugged Individualists. There are stories about the McCalls and many other mountain folk and hermits that he met in the hollers over a thirty year period of time. I loved your blog about his story in Harpers. Thanks, Kay Loveland

Nice to hear from you! I am impressed that your dad reached the age of 100. His wonderful article was very memorable. I've mentioned it to people on several occasions. Your book sounds really good, so I will need to track it down. Those rugged individualists have pretty much moved on to the realm of memory. So-called progress has its advantages, but it can be rather lifeless and boring compared to what it replaced.