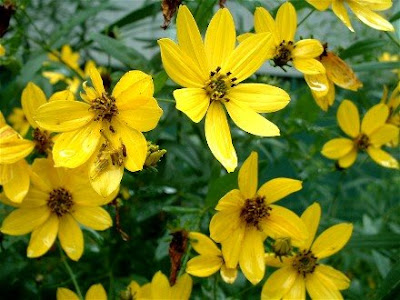 I’ve been reading the journals of John Lyon, an early botanist of the Southern Appalachians, who crossed Balsam Gap, traveled down Scott’s Creek and went across to Cullasaja in 1808. From his base in Asheville, Lyon wandered in all directions to collect unusual plants.

On one such trip to Knoxville, Lyon encountered a Colonel McClelan who told him a story - and what a preposterous story it was:

The same gentleman informs me that he very lately was an eye witness of a most severe battle between two large Rattlesnakes. One of them having been bitten by the other retired from the conflict a little distance and ate 2 or 3 leaves of a plant which the Colonel showed me and which proves to be the Coreopsis senafolia [Coreopsis major] of Mich. and immediately returned to the contest, and after continuing it with great fury for some time one of them wase again bitten and immediately disentangled himself and repaired to the same plant and eate some of it as before, and again renewed the contest.

The Colonel then stepped up quietly without disturbing the combatants and pulled up the plant, and again took a convenient station to see the issue; when after some time one of them was again bitten and immediately retired in search of the plant as before but not finding it immediately turned over on his back and died in 2 or 3 minuts. Whither it was the same individual snake that was bitten each time he could not ascertain from their writhing and twisting together during their conflict.

As far as I’ve been able to determine, this is the only reference to coreopsis as a remedy for snakebite. Coreopsis major belongs to the Aster or Sunflower Family. It grows to the height of two to three feet and has a slender stem. Its leaves are two to four inches long and one quarter of an inch to an inch wide. It is common in the Little River Gorge of the Great Smokies, flowering from June through August. 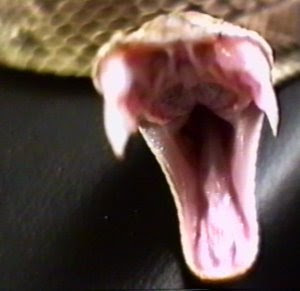 Perhaps coreopsis does hold promise as a snakebite remedy…

…but I would like to hear something more convincing than the Colonel’s vivid account of the battling rattlers.
Posted by GULAHIYI at 11:00 PM

isn't that story in Mooney?

if not I know I have heard it repeated elsewhere. perhaps in shaman literature, perhaps in the foxfire books.

It very well could be in Mooney, but I don't know. Mooney has quite a few good rattlesnake legends in there. He mentions "rattlesnake's master" (Silene stellata). I've always liked this from Mooney:
"When one dreams of being bitten by a snake he must be treated the same as for an actual bite, because it is a snake ghost that has bitten him..."