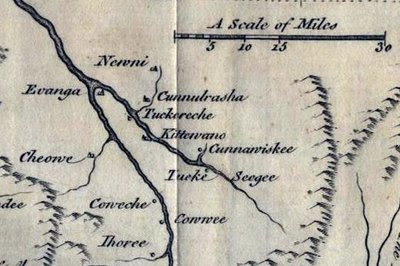 A portion of the 1760 Kitchin map. The village of Evanga is indicated where the Little Tennessee and the Tuckasegee Rivers meet.

Last August, I shared a look at one of the first published maps to display the Tuckasegee Valley in any detail – Thomas Kitchin’s New Map of the Cherokee Nation (1760).

The Kitchin map identifies several villages located along the Tuckasegee River as Kittewano (Kituwah), Cunnawiskee and Tuckeseegee (Tuckasegee). Villages on the Oconaluftee include Newni, Cunnulrasha, Tuckereche. The section of the Kitchin map show above includes the Little Tennessee River villages of Cowee and Ihoree.

Only recently, I managed to get my hands on George Hunter’s 1730 map of the Cherokee country. Hunter accompanied the eccentric Sir Alexander Cuming on his mission from Charleston, SC to the mountains and mapped the entire route of the trip. 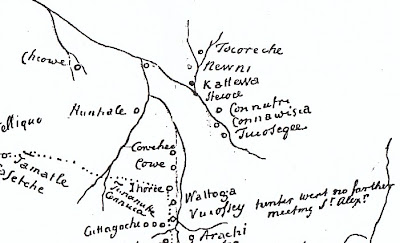 This portion of the Hunter map lists some of the villages that reappear on Kitchin’s map thirty years later.

A settlement is shown at the forks of the Tuckasegee and Little Tennessee, although it is not named on the Hunter map. The villages on the Oconaluftee are listed as Newni and Tocoreche, while Kattewa (Kituwah), Stecoe, Connnutra (?), Connawisia (?) and Tucosegee (Tuckasegee) are shown along the Tuckasegee. Hunter lists many of the towns on the Little Tennessee, such as Cowe and Ihoree.

The dotted line paralleling the Little Tennessee and turning west at Ihoree, from where it goes on across the Nantahalas, was a well-known trading path.

The documentary record for this period in the region is relatively slim, but this map is a reminder that white traders were already familiar with the area from buying deerskins and selling trade goods to the Cherokees.

Thanks to the folks at the North Carolina Collection of the University of North Carolina library in Chapel Hill, the Kitchin map and many, many other NC maps are at:
http://www.lib.unc.edu/dc/ncmaps/index.html

Unfortunately, George Hunter’s 1730 is not among them, and I’ve been unable to find it available online. If you visit the Oconee Heritage Center in Walhalla, SC, though, a nice framed copy hangs by the entrance to the museum.
Posted by GULAHIYI at 12:02 AM

I have spent a LOT of time at this map site.

Note that the 1910 Montgomery County map of Eldorado Township still denotes "Kron Land" at the confluence of the Uwharrie and Yadkin rivers.

This land was what was left of a very large tract inherited by Mrs. Kron (Dr. Kron's wife) from her uncle Henry Delamothe. Kron's last surviving daughter attempted to will all that she had to descendants of former Kron slaves. This failed ostensibly because of the will not having been properly witnessed. The spinster daughters were artists and lived out their lives selling off bits of the tracts inherited from their parents, but what was left was quite substantial, as can be seen.

I periodically research this stuff, but the next step is a trip to the NC Archives to actually see the will and probate documents. Instead of going to the slave descendants (many surnamed Kron and buried on the mountain as late as 1932) it went to heirs still living in France, and was bought at nice prices by locals, including the Morrow brothers, who bought the Kron place on the mountain.

For more interesting asides, you can look into the Delamothe will, where he disinherited his wife and "daughter", gave all to Mrs. Kron, and left a freed slave a considerable inheritance including a life interest in a farm. This will was the subject of a NC Supreme Court case.

Way too much interesting stuff about Kron and his relations. Ive spent 2 days with the original Kron holdings at the Southern Historical Collection at UNC.