Shortia Quest, Then and Now 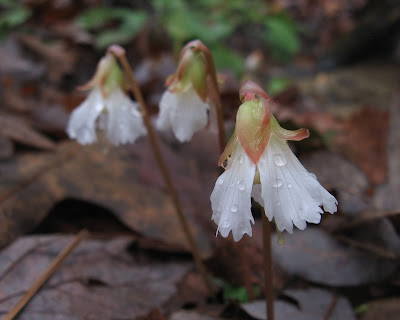 I have managed to accomplish one thing I wanted to do in 2009 and it was right at the top of the list. I saw Oconee Bells in bloom. Few, if any, wildflowers in this region have a more unusual history. Seeing the flowers myself, I thought about an account from a 2007 field trip:

Shortia in bloom had eluded Michaux, who discovered the plant, Asa Gray who named it, and Charles W. Short, for whom it was named. We were able to enjoy hundreds of Shortia flowers in full bloom in the plant's native habitat, while not one of these legendary figures in the history of the plant had seen this spectacle.

Kelvin Taylor, at Welcome to Scenic North Carolina, summarized the ongoing quest to find the Shortia:

In December of 1788 the great French botanist André Michaux discovered this plant while exploring in the mountains of Carolinas. He recognized from the seed capsules that it was a new species and possibly a new genus. He collected a one to study upon his return home at a later date. The dried specimen lay ignored in a Paris herbarium for years until a visit by an American botanist Asa Gray in 1839.

Gray realized this plant was new to science. Upon returning home he organized an expedition to the Carolina mountains to search where Michaux’s notes indicated he had discovered the mysterious plant. After searching for two years Gray failed to find the elusive plant. Using the herbarium specimen collected by Michaux, Gray described and named it Shortia galacifolia after Dr. Charles W. Short, a botanist and physician of Louisville, Kentucky. The specific epithet refers to the leaves resembling those of Galax. Ironically Charles Short never actually saw the plant because he died 14 years before it was rediscovered. 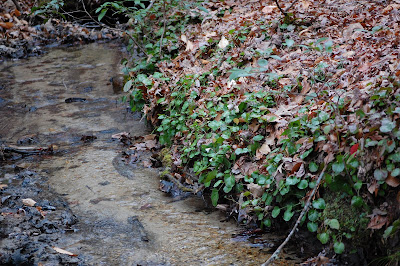 The rediscovery of the "lost Shortia" became an obsession for many botanists. It would not be an educated plantsman who would find this rare botanical gem, but a teenager named George Hyams. In May of 1877 the young George found a patch growing along the Catawba River near Marion, North Carolina. Several specimens were collected the next spring when the plants were in bloom. After giving up all hope of ever seeing a living Shortia, Asa Gray finally saw the plant he had been searching for all these many years.A decade year later in 1886, and virtually 100 years after André Michaux’s visit to the same area, Dr. Charles Sargent came across Shortia while searching for a magnolia, in Oconee County, South Carolina. Asa Gray eventually did get to see Shortia in the wild, but he never visited the spot where Michaux had found the original plant. 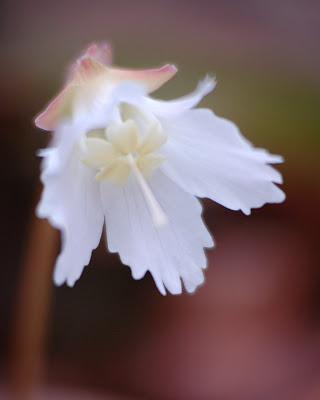 I’m guessing that Asa Gray did not have the benefit of the journal that Michaux wrote in 1788. Michaux gave specific directions for finding the unnamed plant. (Margaret Mills Seaborn translated Michaux’s journal from the French.) In early December of 1788, the botanist left the Cherokee village of Seneca, near present-day Clemson University, and traveled upstream alongside the Keowee River, toward the Whitewater, Thompson and Horsepasture Rivers. Much of the territory he explored, and 60% of the Oconee Bell habitat in the Upstate, was flooded by Lakes Jocassee and Keowee in the 1970s. From Michaux:

On the eleventh of December there was a hard frost and the air turned clear and very crisp. I noticed a chain of high mountains stretching from west to east and where the frost showed little in places exposed to the sun. I gathered a ground juniper Juniperus repens) that I had not yet noticed in the middle parts of the United States. But it should be noted that on these mountains I saw several trees of the northern regions such as river birch (Betula nigra), alternate-leaved dogwood, white pine, hemlock spruce, etc. We crossed an area of about three miles through rosebay rhododendron (Rhododendron maximum). With my guides I returned to the head of the Kiwi (head of Kiwoe [Keowee]) and I collected a large amount of that plant with the saw-toothed leaves that I had found the day of my arrival (Shortia galicifolia). I did not encounter it on any other mountains. The Indians here say the leaves taste well when chewed and that their smell was good when they were crumpled, which I found to be true.

Directions for Finding this Plant.

The head of the Kiwi lies at the confluence of two large creeks which cascade down from high mountains. This junction occurs in a small plain where there used to be a town or rather a village of the Cherokees. Coming down from the junction of the two creeks with the river on the left and the northern faces of the hills to the right, one can find a path made by Indian hunters about 30 to 50 paces [toises] from this confluence. It leads to a brook where one can recognize the vestiges of an Indian village by the peach trees subsisting amidst the underbrush. Continuing on this path one soon reaches the hills and finds this plant covering the ground with the trailing arbutus.

December 12, 1788. Coming back I visited the southern faces of the hills. Our provisions were so low that there was a very meager breakfast. I gathered a lot of Magnolia cordata in better condition than the preceding days.

We kept close to the river and saw several flocks of wild turkeys. Our Indian guide fired at them, but the rifle failed several times since we had not been able to protect it from the rain in the preceding days. Thus our supper consisted of a few chestnuts that our Indian guide had gotten from another of his nation.

We made eighteen miles. The weather became very clear. This very evening one could feel the frost, and after having asked my Indian to tell me the names of several plants in his language, I wrote my journal at moonlight.

On December 13th I attempted to shoot a wild turkey at daybreak; there were plenty in this area but I was unsuccessful and we broke camp without breakfast. We were famished and changed our direction towards a camp of Indian hunters, and, although the hills became less steep, it was one o'clock in the afternoon before we arrived there after a journey of six hours estimated at only fifteen miles. They cooked bear meat for us, cut into small pieces and fried in bear grease. Although it was smothered in grease, we had an excellent dinner, and, although I ate a lot of the fattest part of the meat, I did not become indisposed. The bear grease is tasteless and resembles a good olive oil. It doesn't even have a smell. When some food is roasted with it, it does not congeal until it freezes. After dinner, we made sixteen miles and arrived at Seneca in the evening. ...

On December 20th it was very cold and I slept at the plantation of General Pickens 45 miles from Seneca.


The Michaux accounts are less familiar than those of William Bartram, who explored the mountains more than a dozen years earlier. Lacking Bartram’s extravagant writing style, Michaux provided detailed descriptions of travel, accommodations, plants and animals, as in these passages from 1787:

On June 9 we went to see a Frenchman named Mr. Martin who had settled in the area as a planter. We wanted to hire two Indians to guide me in the mountains which separate the state of Caroline [Carolina] from the Indian nations of the Cherokees, Creek, Chickasaw, etc. ...

It turned out to be very difficult to make the Indians agree to guide me, not only because of the exhorbitant price, but also because each of the two wanted a horse. It was even more difficult to get an interpreter and I decided to go only with one young man and the two Indians I wanted. I arranged to meet them the next day to conclude the agreements; and to persuade them to keep their word, I promised them half a gallon of rum. I passed through a place abandoned by the Indians andwhich had been the location of the town called Seneca. I noticed the honey locust (Gleditsia triacanthos) which they eat, plums, wild peaches. I collected a black oak which I had never seen anywhere in Caroline and Georgia.

Sunday the 10th. The Indians came with a chief and several others of the nation. After I had made them fully understand that I wanted to visit the headsprings of the Kiwi river and the Tugelo [Tugalo] river which together form the Savannah river; those which form the Tanase [Tennessee] river which runs into the Ohio; and that I wanted to go as far as Tanasee each of them demanded a blanket and a petticoat, the price of six dollars each for the twelve days the journey was to take. I promised them, but half the money had to be paid in advance, because they said many other Whites had deceived them. I further promised to fill their bellies with rum if I should return from my journey satisfied. They were quite happy and told me that they would be ready the following morning whenever I wanted to leave.

On June 11th several courteous residents of the area who were interested in my journey supplied me with provisions, one had me some bread baked and had some corn meal ground, another sent me some maize, lent me "un equipage de cheval etc." I left with a young man who had lived with the Indians for five months and went to the arranged meeting place, and at noon we set out with the Indians whom I had furnished with gunpowder and bullets. They guided me alternately through hills and torrents which are called creeks.

On the l2th the two Indians went hunting from dawn, but since they didn't kill anything we ate some of the corn meal boiled in water. At noon we took a short halt to rest the horses and to drink from a brook, where the water was the purest and best one could drink in America. Following the example of my two Indians I soaked the corn meal in this water and that was our dinner. The bad food and the bad paths didn't bother me as much as the displeasure of not having found any interesting plant since May 8th and I frequently pondered the annoyance of such a journey without results.
.
For all stories on Andre Michaux http://gulahiyi.blogspot.com/search/label/michaux
Posted by GULAHIYI at 12:01 AM

I saw a blooming Shortia for the first time in my life. It did not require much effort since there are several nice drifts of it growing in a native plant garden in Lake Junaluska.

Now I just need to find some nursery propagated plants to add to my own garden.