Have you seen the little piggies
Crawling in the dirt?
-The Beatles 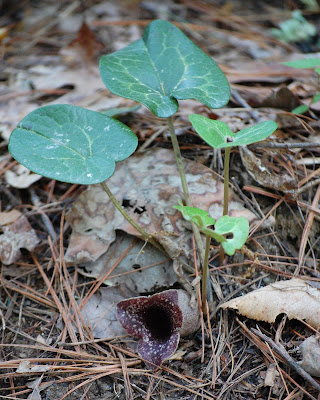 While searching for Oconee Bells and again while hunting Pink Lady's-Slippers, I crossed paths with the reclusive piggies. They were hiding at the base of short plants bearing shiny leaves, and by brushing aside the leaf litter and loose soil, I got a better look at those porcine objects. Called "piggies" or the equally descriptive "little brown jugs" these peculiar formations are the blooms of wild ginger plants.

Traditionally, the strongly aromatic root of the plant has served as a substitute for ginger. Modern researchers have extracted an anti-tumor compound, aristolochic acid, from wild ginger.

The common wild ginger (Asarum canadense) is a deciduous plant with glossy heart-shaped leaves. While older guidebooks include other species in the Asarum genus, the evergreen wild gingers are now classed in the Hexastylis genus. Little Brown Jugs (Hexastylis arifolia, formerly Asarum arifolia) has smaller and more sharply triangular leaves than A. canadense. Other species found in the Southern Appalachians include Hexastylis minor, H. shuttleworthii, H. virginica, H. memmingeri, and H. heterophyllum 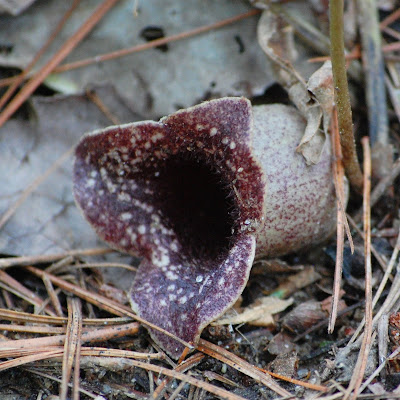 The wild gingers are notable for their unusual, almost subterranean flowers. Ants, beetles and other terrestrial creatures are known to pollinate the gingers. Often, they are pollinated by fungus gnats, who lay eggs inside the "piggies" as they flit from flower to flower. But, later, the gnat larvae die from munching on the poisonous plant tissue of the host.

The Dictionary of Regional English compiles several references to the common names of the plant and its bloom:

Piggies, that is, pygmies...

The jugs grow to roughly an inch in length, and, clustered together, they look like piglets with open mouths waiting for supper. Little Brown Jugs were thus quite often called "pigs" by local people... 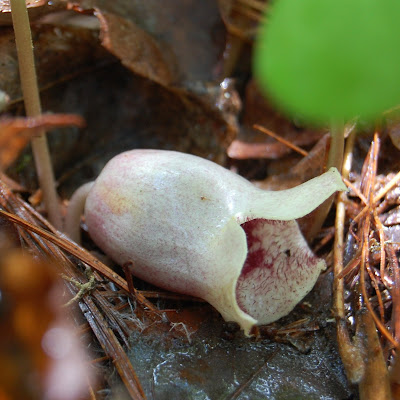 The wild ginger has captured attention from proponents of the doctrine of signatures. That philosophy dates back at least as far as the Greeks of 2000 years ago and was further developed by European herbalists during the Middle Ages and after. They contended that shapes, colors and other characteristics of plants were clues to their usefulness in treating various physical problems. For instance, walnuts were considered helpful for curing head ailments. Small holes in the leaves of Saint Johns Wort were thought to resemble the pores of the skin and, thus, the plant was used to treat dermatological complaints.

As mentioned previously, the name “orchid” was derived from the Greek word for scrotum, and referred to the shape of the orchid root. Indeed, men would use that plant for its presumed aphrodisiacal effect. 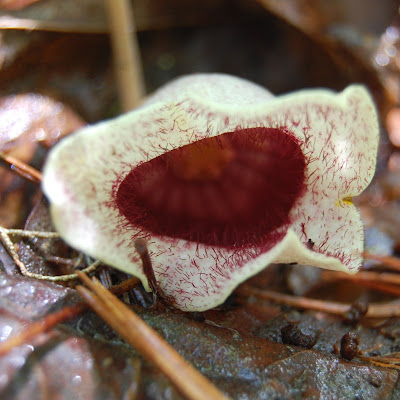 Wild ginger is a member of the birthwort, or Aristolochiacea family. The name comes from two Greek words, aristos, meaning best, and lochia, meaning delivery. Not surprisingly, plants in the birthwort family were considered to have medicinal value during childbirth. So, for many centuries, the womb-like shape of the wild ginger's flowers has inspired its use for promoting reproductive health in women.

On the other hand, to paraphrase a comment attributed to Sigmund Freud, "sometimes a flower is just a flower."

[Photos were taken in early May, and I believe these are specimens of Asarum canadense. I assume the bloom shown in the last two pictures was covered even more than the usual wild ginger flower, and was blanched by being deprived of sunlight.]
Posted by GULAHIYI at 9:10 PM

Good photos...those little brown jugs are hard to focus in on sometimes!

They do look like little piggies,
and so adorable !

Thank you for this informative post, I have so much to learn and I appreciate your help.

I am 51 years old and I love this plant as it brings back a very special childhood memory for me. My 2 sisters and I grew up in a tiny country town called Iva, S.C. My grandparents had 19 acres and we used to play in the woods and in the creek that ran through it. My mother used to entertain us with the "little piggies" by taking small sticks and making legs so that they resembled little piglets. She would leave the little stem attached at the end so that it looked like the tail of the piglet. Thank you for reminding me of a wonderfully simple time.