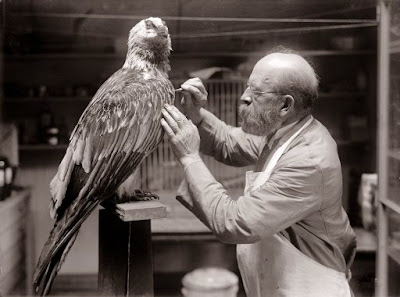 Professor Ignatz Mucklefutz, director of the Institute of Pollo Ferrum inspects a new acquisition.
More years ago than I care to remember, I heard a tape-recorded lecture by one of the great maverick scholars of the past century. Because of his thick accent I had to listen closely, but I would have anyhow because Professor Ignatz Mucklefutz was fascinating.
It is hard to categorize his line of thought and his accomplishments, but I would describe him as a cross between Saint Francis of Assisi, Carl Jung and Thomas Edison, if you can imagine that.

Professor Mucklefutz, a reclusive heir to the Swiss ball bearing Mucklefutz family fortune has devoted his life to the study of rusticulated pollo objet d'art. These rare and beautiful objects were the focus of worship in the little known Great Chicken Cult of Machu Picchu. 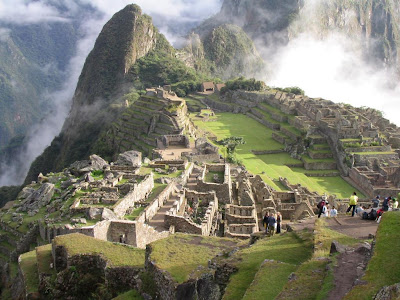 I didn't even know that the professor was still alive, but he is alive and active as ever.
Ignatz is looking for a North American Director for the Institue of Pollo Ferrum and several candidates, including one in the Asheville area have been identified. For now the search is being conducted with the utmost discretion and secrecy because the directorship includes access to certain accounts and formulas that have national security implications.
In case Ignatz schedules a public presentation of his latest travels and findings during his visit to WNC I'll be sure to mention it here.
Posted by GULAHIYI at 2:01 PM

Oh mon this is so exciting. Me and my family were run out of Haiti for maintaining the rituals of the chicken. We found our way to West Asheville because of its strong and powerful energy and because it is well known for its tolerance. I lost track of Professor Mucklefutz many years ago and feared that the wisdom of the ages would be gone. Now we are resurrected and restored.

My family's skateboard business was about to go under until Dr. Mucklefutz extended ball bearings on credit and easy terms. I don't know about this chicken stuff but he is a truly great humantitarian.

Unknown to many, Dr. Mucklefutz was the initiator of the globally famous "Chicken Dance." You know the one with that inspiring background music that goes on forever (da-da-da-da-da- da-dum...repeat 1,000 more times)and where everyone joyously flaps their arms like a chicken. I believe he was the first person to give the entire world a reason to share the joys of chickenhood!

You cannot believe my excitement at finding your post concerning Dr. Ignatz Mucklefutz. I have been trying for years to locate Ignatz, who is the twin brother of my dear father, Egnitz Mucklefutz. My daddy died 20 years ago, and his heart was always broken because of the separation from his brother in their childhood. My uncle Ignatz was stolen from his nanny in a park in Paris when the boys were only 3 years old. Their parents searched tirelessly for 15 years, before they decided to make a fresh start in Ameria. They came to New York City, where my father studied icktheology and became, himself, a Dr. Mucklefutz. He moved to California for his professional career --- but more about that some other time. Can you please tell me how I might contact Ignatz? Do you know his schedule for the pending appearances you mentioned? How did you find out all this about him? I have searched all my adult life for any trace of him. I usually Google his name at least once a week, but for the past month I was on a metaphysical retreat in -- amazingly -- the ruins of MachuPichu. I have only returned today to my home and to my computer.

Please send any further information you may have, and bless you for this connection.