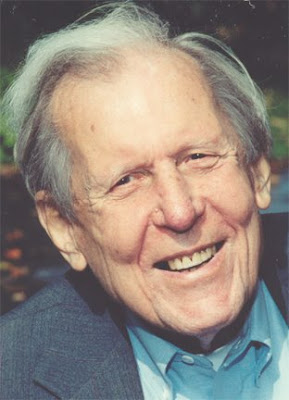 We might sometimes reflect and recall that the purpose of all our science, technology, industry, manufacturing, commerce, and finance is celebration, planetary celebration. This is what moves the stars through the heavens and the earth through its seasons. The final norm of judgment concerning the success or failure of our technologies is the extent to which they enable us to participate more fully in this grand festival.
Thomas Berry - from The Dream of the Earth

I just learned, via Sojourners, that Thomas Berry has died. It must have been 25 years ago that I went to hear him speak at UNC-Asheville. Berry was someone with something to say. Someone and something worth hearing.

The Legacy of an Eco-Prophet: Remembering Thomas Berry
by César Baldelomar 06-03-2009

Today’s most pressing task for humanity, I believe, is to halt the current environmental crisis. Thus, churches worldwide should be working to reduce greenhouse gases, protesting the destruction of rain forests, and becoming a leading voice against the arrogant stance that humans are the pinnacle of God’s creation. This idea that humans are above all creation, as well as the notion that Christians are not of this world, has led to a serious devaluation of creation in the Western world. After all, why should I care about nature if I am not dependent on it, and if my ultimate destination is a heavenly realm?

Consequently, we now find ourselves at a major turning point in human, and indeed earth, history. Several scientists have reported that global warming has become the greatest threat to human survival. And these same scientists have confirmed that humans and our activities are the main cause of earth’s fever. Yet, there are still many who doubt the scientists’ conclusions, and, sadly, the majority of them may be Christians. Wendell Berry has argued that “The certified Christian seems just as likely as anyone else to join the military-industrial conspiracy to murder Creation.” Robin R. Meyers, in his book Saving Jesus from the Church: How to Stop Worshiping Christ and Start Following Jesus, states that “The science we say we trust (unless it threatens our way of life or our religious beliefs) has spoken clearly, and our way of being in the world has become unsustainable”

To halt and reverse the ecological crisis presently enveloping our planet, we must raise consciousness of the universe’s awesome story as an interdependent system still developing. One of the greatest storytellers of the universe story, Fr. Thomas Berry, passed away on the morning of June 1, 2009. Through his voluminous writings and life work as a prophetic cultural historian, ecological philosopher, and theologian, Berry lives on. Let us reflect on his life by acknowledging some of his significant contributions as an environmental spirituality teacher.

Thomas Berry, born November 9, 1914, in Greensboro, North Carolina, held that all must be seen within the context of the universe. Modern science – with its theories about the universe’s origins, evolution, and the interaction of species with other species and with their natural environment – can, according to Berry, awaken the modern mind to the incredible universe story. This universe story, far from holding humanity as creation’s zenith, sees all things as interrelated and dependent upon each other.

This radical notion of interrelatedness is diametrically opposed to contemporary Western culture’s dominant “atomistic-mechanistic” ethos, which views everyone and everything as individualistic atoms or mechanical agents with no relation to each other. In this vein, the natural world itself is seen as a dead pile of raw material ready for humans to extract and convert into commodities. The market then determines nature’s inherent worth by placing a price tag on the commodity. So trees are worthless unless they produce top-notch baseball bats or reams of fancy paper. 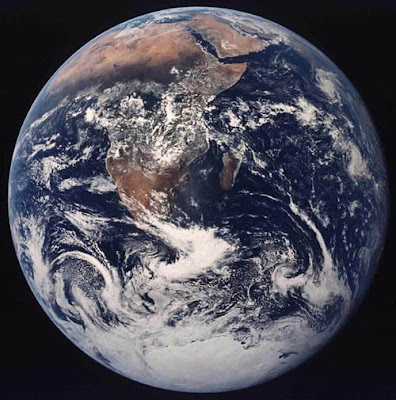 The same atomistic-mechanistic thinking also applies to humans. Many philosophers and sociologists argue that in modern Western culture a person’s worth is determined not by virtue of his or her personhood and relationships with others and the universe, but by how much money that individual makes a year. And since earning copious amounts of money usually means trumpig someone else, this individualistic system rewards intense competition, usually to the detriment of relationships. This system has destroyed our ability to understand and appreciate the mystery of creation and its complex web of relationships.

Berry also argued that there have been two great books in the history of Western civilization. One is the Bible, and the other less known one is the Book of Nature. He stated that it is time to temporarily put the Bible back in the book shelf (perhaps because of its abuse by Christians who read it literally) and open up the Book of Nature, which can be found anywhere – in trees, birds, insects, oceans, lakes, rivers, mountains, grass, flowers, sky, stars, and the moon. Only by understanding our universe story can we truly be in awe of the Divine’s creation. In his book The Great Work: Our Way into the Future, he states, “The more we learn about the Earth the more clearly we see it as a privileged planet, a creation and a homeland of a multitude of living beings.” To put it differently, the more we “read” the Book of Nature, the better equipped we will be to transform our mode of thinking from atomistic-mechanistic to organic-holistic. This ideological shift from individual to communal and relational will lead to environmental sustainability and social justice.

This article, of course, does not do justice to a prophetic man who exerted passion for all creation. But I do hope it will lead young people to delve into Berry’s work and continue his legacy. This way, we ensure that he lives on, but, more importantly, we save our planet and our future generations from peril.

There is an ultimate wildness in all this, for the universe, as existence itself, is a terrifying as well as a benign mode of being. If it grants us amazing powers over much of its functioning we must always remember that any arrogance on our part will ultimately be called to account. The beginning of wisdom in any human activity is a certain reverence before the primordial mystery of existence, for the world about us is a fearsome mode of being. We do not judge the universe.
Thomas Berry - from The Great Work

When did he pass over ?

I didn't know Berry was from Greensboro. Thanks for this post.

Yes...and he returned there in his last few years. Here's an obit from g'boro:
http://www.news-record.com/content/2009/06/01/article/thomas_berry_renowned_cultural_historian_dies

Thanks for the information on Berry. I can't believe Fontana Regional Library doesn't have his book. This should be a must have. Sigh.