Stop this day and night with me, and you shall possess the origin of all poems;
You shall possess the good of the earth and sun—(there are millions of suns left;)
You shall no longer take things at second or third hand, nor look through the eyes of the dead,
nor feed on the spectres in books;
You shall not look through my eyes either, nor take things from me:
You shall listen to all sides, and filter them from yourself.
-Walt Whitman , Leaves of Grass

Almost everything you do will seem insignificant, but it is important that you do it.
-Mahatma Gandhi

If one keeps loving faithfully what is really worth loving, and does not waste one's love on insignificant and unworthy and meaningless things, one will get more light by and by and grow stronger. Sometimes it is well to go into the world and converse with people, and at times one is obliged to do so, but he who would prefer to be quietly alone with his work, and who wants but very few friends, will go safest through the world and among people. And even in the most refined circles and with the best surroundings and circumstances, one must keep something of the original character of an anchorite, for other wise one has no root in oneself; one must never let the fire go out in one's soul, but keep it burning. And whoever chooses poverty for himself and loves it possesses a great treasure, and will always clearly hear the voice of his conscience; he who hears and obeys that voice, which is the best gift of God, finds at least a friend in it, and is never alone.
-Vincent van Gogh

You humans think that you are insignificant, while there is a great universe contained in you.
-Ali ibn Abi Talib, warrior, poet, and son-in-law of the prophet Muhammad

Sometimes, I think my purpose on this hilltop hermitage is to embrace insignificance. Since I’m compelled to write about it, that must mean I have a ways to go. Today, I couldn’t help but be aware of the life and death all around me. I was grateful to witness it, and wondering just how I fit in. Denise Levertov’s words have stuck with me, where she says we have

only begun to envision
how it might be
to live as siblings with beast and flower,
not as oppressors

All day, I heard the hawks down at the end of the ridge. Why they were screaming, I just don’t know. Was this some noisy mating behavior? I watched them circle and glide and I tried to figure out what they were saying, but it was a mystery. 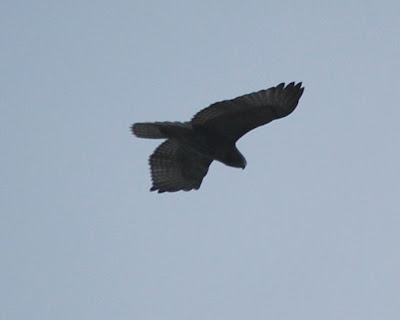 My tread scares the wood-drake and wood-duck, on my distant and day-long ramble;
They rise together—they slowly circle around.
I believe in those wing’d purposes,
And acknowledge red, yellow, white, playing within me,
And consider green and violet, and the tufted crown, intentional;
And do not call the tortoise unworthy because she is not something else;
And the jay in the woods never studied the gamut, yet trills pretty well to me;
And the look of the bay mare shames silliness out of me.
-Whitman 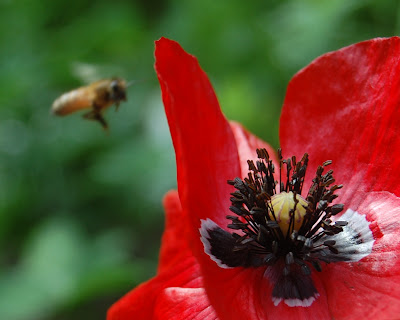 I stopped where the bees were working the red poppies. But under the shade of the flowers, something was missing. The delicately sculpted mushrooms that sprung up yesterday were gone. 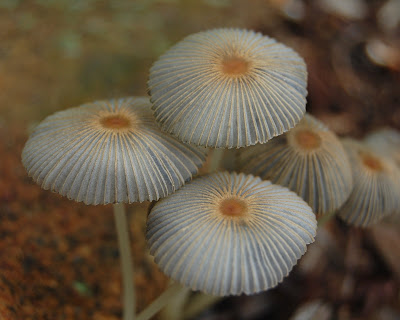 They are alive and well somewhere;
The smallest sprout shows there is really no death;
And if ever there was, it led forward life, and does not wait at the end to arrest it,
And ceas’d the moment life appear’d.
All goes onward and outward—nothing collapses;
And to die is different from what any one supposed, and luckier.
Has any one supposed it lucky to be born?
I hasten to inform him or her, it is just as lucky to die, and I know it.
I pass death with the dying, and birth with the new-wash’d babe, and am not contain’d
between my hat and boots;
And peruse manifold objects, no two alike, and every one good;
The earth good, and the stars good, and their adjuncts all good.
-Whitman


Later this morning, I went to the garden to pull weeds. And in the grass near the okra, I saw a garden hose. Funny, though, I didn’t remember leaving a hose there.

Then I recognized it wasn’t a hose, but a black snake. As I stepped in for a closer look, the snake remained motionless. 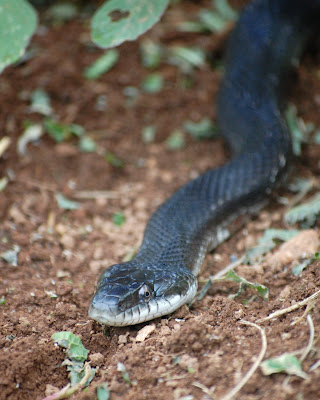 I thought about the sparrows nesting in the beans. The babies were less than a week old, and this snake was only forty feet from the nest.

It wasn’t even noon yet and I faced a moral dilemma. Part of me said to stay out of it. Another part of me sided with the birds. I knew what to do, or what not to do, but my heart won out over my head. Finally overcoming my hesitation, I went to grab a bucket from the truck. This snake would do just fine someplace farther away from the garden. Or so I rationalized.

By the time I returned with the bucket, the snake was disappearing into a thicket of strawberry plants.

And all I could do was say a little prayer for the birds. 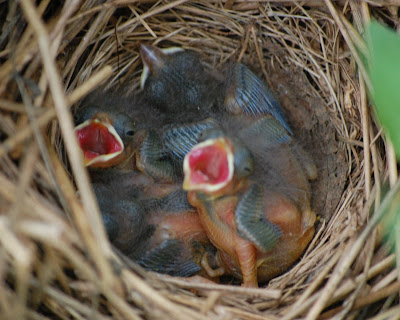 This evening, I dug a few hills of potatoes – white, red and gold - and left the shovel standing to mark the end of the row. I went to find a box for the potatoes when I saw one bird, and then another, swoop past overhead.

They were swallows. I stood there amazed by their silent aerobatics, as they banked and dove above the garden, catching flies. One of the swallows lit on the shovel handle, its feathers glistening in the afternoon sun. After a second’s pause, the swallow resumed its looping flight. 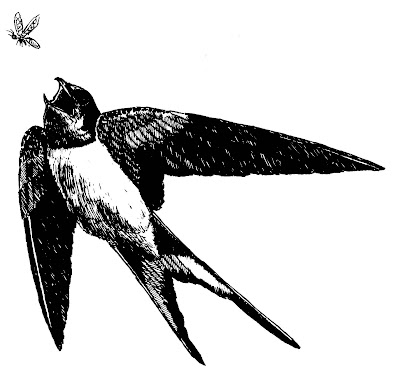 I think I could turn and live with animals, they are so placid and self-contain’d;
I stand and look at them long and long.
They do not sweat and whine about their condition;
They do not lie awake in the dark and weep for their sins;
They do not make me sick discussing their duty to God;
Not one is dissatisfied—not one is demented with the mania of owning things;
Not one kneels to another, nor to his kind that lived thousands of years ago;
Not one is respectable or industrious over the whole earth.
So they show their relations to me, and I accept them;
They bring me tokens of myself—they evince them plainly in their possession.
-Whitman


The Teacher
By Paul Simon

Time and abundance thickened his step
So the teacher divided in two
One half ate the forest and fields
The other half sucked all the moisture from the clouds
And we, we were amazed at the power of his appetite