Nag Mani and the Uktena, III 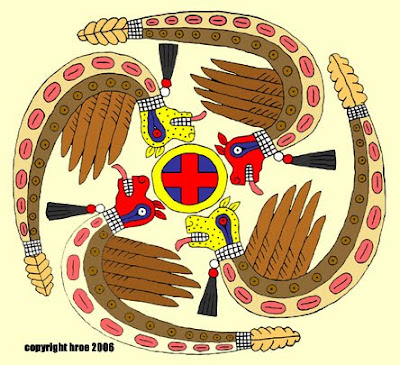 Uktenas by the artist Herb Roe, based on a shell engraving from Spiro, Oklahoma.


I’ll conclude this with one more eighteenth century account of the Cherokees’ talismanic stone that originated from a monster living in the Tuckasegee, and a New York Times article on a similar phenomenon in India.

James Adair was a trader among the tribes of the Southeast and published his History of the American Indians in 1775. James Mooney clarified one point of Adair’s account of the Uktena:

With pardonable error he confounds the Uktena with the Chief of the Rattlesnakes. The two, however, are distinct, the latter being simply the head of the rattlesnake tribe, without the blazing carbuncle or the immense size attributed to the Uktena.
Here is how Adair described the home of the Uktena and its sacred stones:

Between the heads of the northern branch of the Lower Cheerake River, and the heads of that of Tuckaschchee, winding round in a long course by the late Fort Loudon, and afterwards into the Mississippi, there is, both in the nature and circumstances, a great phenomenon. Between two high mountains, nearly covered with old mossy rocks, lofty cedars and pines, in the valleys of which the beams of the sun reflect a powerful heat, there are, as the natives affirm, some bright old inhabitants, or rattlesnakes, of a more enormous size than is mentioned in history.

They are so large and unwieldy, that they take a circle almost as wide as their length, to crawl round in their shortest orbit; but bountiful nature compensates the heavy motion of their bodies; for, as they say, no living creature moves within the reach of their sight but they can draw it to them; which is agreeable to what we observe through the whole system of animated beings. Nature endues them with proper capacities to sustain life: as they cannot support themselves by their speed or cunning, to spring from an ambuscade, it is needful they should have the bewitching craft of their eyes and forked tongues.

The description the Indians give us of their colour is as various as what we are told of the carnelian, that seems to the spectator to change its colour, by every different position he may view it in; which proceeds from the piercing rays of the light that blaze from their forehead, so as to dazzle the eyes, from whatever quarter they post themselves—for in. each of their heads, there is a large carbuncle, which not only repels, but they affirm, sullies the meridian beams of the sun. They reckon it so dangerous to disturb these creatures, that no temptation can induce them to betray their secret recess to the prophane. They call them and all of the rattlesnake kind, kings, or chieftains of the snakes, and they allow one such to every different species of the brute creation.

An old trader of Cheeowhee told me, that for the reward of two pieces of stroud cloth, he engaged a couple of young warriors to shew him the place of their resort, but the head-men would not by any means allow it, on account of a superstitious tradition—for they fancy the killing of them would expose them to the danger of being bit by the other inferior species of that serpentine tribe, who love their chieftains, and know by instinct those who maliciously killed them, as they fight only in their own defence and that of their young ones, never biting those who do not disturb them.

Although they esteem those rattlesnakes as chieftains of that species, yet they do not deify them, as the Egyptians did all the serpentine kind, and likewise Ibis, that preyed upon them; however, it seems to have sprung from the same origin, for I once saw the Chikkasah Archimagus to chew some snake-root, blow it on his hands, and then take up a rattlesnake without damage; soon afterwards he laid it down carefully, in a hollow tree, lest I would have killed it. 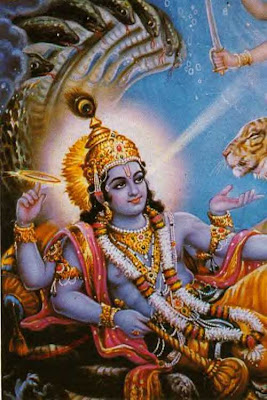 Vishnu, reclining on a Shesh-Nag
While I shouldn't be surprised that this story is a universal story, I am amazed at how it is. The New York Times, on August 18, 1889, published the story of “A Jewel in a Serpent’s Head”:

It is doubtful whether Shakespeare’s toad, “Ugly and venomous, Wears yet a precious jewel in his head,” but there is a belief current in all parts of India that a certain variety of snakes, called Shesh Nag, when it attains the age of 1,000 years, has a precious jewel formed it its head.

This jewel, it is affirmed, possesses the quality of sucking up the poison of the deadliest snake, if applied to the wounded part. Strangely enough, a Parsee gentleman is reputed to possess this invaluable jewel, according to a correspondent of a Gujarati weekly published in Wadhwan, in Gurajat.

The correspondent says that when the present owner – who, by the way, is now sixty-three – was twenty-three years old he lighted upon a snake of the above-mentioned variety, which he killed. Then he found the jewel in his head.

It has already saved several lives. Last year, when Mr. Vidal, the collector of the district, was there it was shown to him, too. The jewel is said to contain a thin, crescent-like fibre, which unceasingly oscillates in the centre.

His Highness the Gaikwar of Baroda, his Highness the Maharajah of Kolhapur, and several other native Princes are said to have offered several hundred thousand rupees for this unique jewel. The name of the owner is Mr. Framji Dadabhai Govekar, Tarapur, Bombay Presidency.
Posted by GULAHIYI at 12:03 AM