Nag Mani and the Uktena, IV 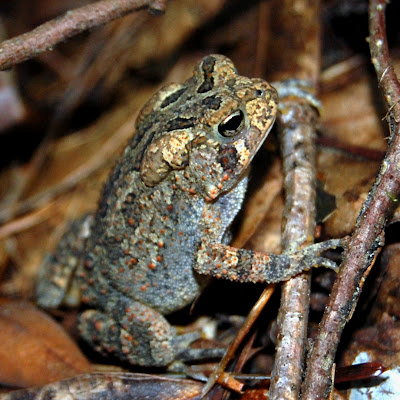 Toad, August 2009
The toad was also thought to hold a jewel within its skull referred to as a toadstone. Once extracted, the toadstone was believed to be capable of detecting the presence of poison and thus warn its owner by becoming warm to the touch, or when set into a ring it would become paler in color. Contrarily, the toad itself was held to be highly poisonous. Today, we know this to be true as the toad secretes indole alkaloid bufotenine from its skin.
- House Shadow Drake http://www.shadowdrake.com/toad.html

An early authority, Thomas de Cantimpre, says of the toad-stone:

If one take the stone from a living and still quivering toad a little eye can be seen in the substance; but if it be taken from a toad that has been some time dead, the poison of the creature will have already destroyed this little eye and spoiled the stone.
If the toad-stone be swallowed at meal-time it passes through the system and carries off all impurities. Here the substance may have been one of many concretionary materials,--bauxite, impure pearls, concretionary limestone, stalagmite, or even the eye-stones from the crawfish; indeed, any material, white or gray, that had a semblance to a toad color, and was then sold by the vendor of charm stones as coming from a toad's head.
Lupton, in his "Book of Notable Things," instructs his readers how to procure the toad-stone:

You shall knowe whether the tode stone be the ryghte or perfect stone or not. Holde the stone before a tode so that he may see it, and if it be a ryght and true stone, the tode will leape towarde it, and make as though he would snatch it. He envieth so much that none should have that stone.

The hundred-headed serpent watching over the jewelled Garden of the Hesperides, and the hundred-clawed toad wearing a precious jewel in his head both belonged to the ancient toadstool mysteries… 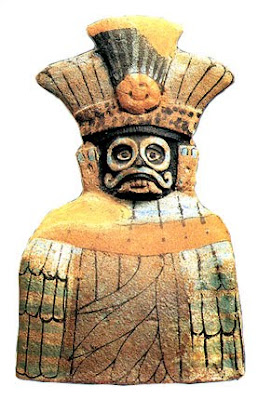 The European mysteries are less fully explored than their Mexican counterpart; but Mr. and Mrs. Gordon Wasson and Professor Heim show that the pre-Columbian Toadstool-god Thaloc, represented as a toad with a serpent head-dress, has for thousands of years presided over the communal eating of the hallucigenic toadstool psilocybe: a feast that gives visions of transcendental beauty. Thaloc’s European counterpart, Dionysus, shares too many of his mystical attributes for coincidence; they must be versions of the same deity; though at what period cultural contact took place between the Old World and the New is debatable.


And then there's The Book of Imaginary Beings, by Jorge Luis Borges, wherein he discusses the carbuncle. The Spanish conquistadors named this animal, and in 1602, poet-priest Martin del Barco Centenera claimed to see one in Paraguay:

...a smallish animal, with a shining mirror on its head, like a glowing coal.

Borges quotes the Etymologies of the Isidore of Seville (ca. 600 AD) regarding the precious stone from the dragon's head:

...it is taken from the dragon's brain but does not harden into a gem unless the head is cut from the living beast; wizards, for this reason, cut the heads from sleeping dragons. Men bold enough to venture into dragon lairs scatter grain that has been doctored to make the beasts drowsy, and when they have fallen asleep their heads are struck off and the gems plucked out.
Posted by GULAHIYI at 12:02 AM