Nag Mani and the Uktena, I 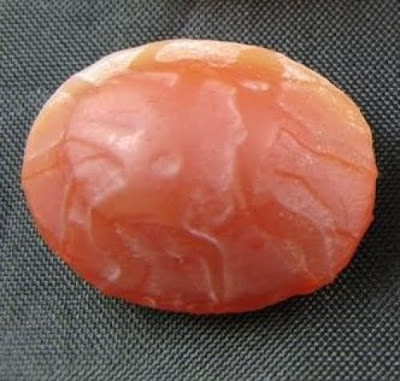 Pearl of Red CobraThis week I received a fascinating comment in response to a story that was first posted here June 2, 2008. I'll start off with the new comment from Arun Gopal:
I first read and became aware of Uktena stories about 2 years ago when digging up writings of Algonquins and peoples of the Appalachians. My ancestry is from India and the legends of the Uktena and other Serpents with light giving gems in their foreheads are absolutely identical to stories found all over S East Asia. The stone in the head of a serpent is called a Nag Mani (Nag - serpent / Mani - gem). It is reputed to contain great power, is able to give its own light, even in daylight and enable it's bearer to live an unsually long time. It has so many properties many unwritten. The favourite of Tantrics and Shamans, they have been known to quest after such objects. The Mani is available by splitting open the skull. Once removed the serpent will die and one then accrues the Karma of killing a serpent, which is paid for by Kaal Sarp Yog in one's next life.

Once a cobra or other serpent reaches a ripe age of 100 years, it is said to develop a Mani inside itself.

The Uktena would seem to be an actual Naag of great power, size and strength, not just a ordinary snake.

I come from a Brahmin lineage, and have met many Swamis, Gurus and Brahmins. However I always dreamed of being in the presence of learned older Native American teachers, Masters, Yogis and Mystics. I feel as if they are somehow my own, like family I havent seen for a long long time...

There are some things we need to share, possibly to complete a cycle... There are many things in the Hindu Dharma which are not discussed, made available or spoken of. Actually a very large amount of ceremony is ever only shared amongst an inside group - I think the holders of such stories are also part of that inside group... I hope one day...

I will interject, at this point, that if you do a google image search on "nag mani" or "nagamani cobra pearls" things get very intriguing, very fast.


That search led me to one site that provided this:
Sri Nagamani

A pearl found in the hood of a cobra or king cobra is round in shape and emits a dazzling effulgence from its own natural seat. After copious washing such a pearl assumes the lustre of a well-polished sword. The possessor of a cobra or serpent pearl meets with rare good fortune, and becomes a pious and illustrious king in time, with a treasury full of other species of precious gems. - GARUDA PURANA ( Ch.69 )

Sri Nagamani is the sacred divine pearl and it is also known as cobra jewel. Sri Nagamani comes in range of colours like blue, black, red, golden yellow and white.

The serpents of the lineage of taksaka and vasuki and those that move at will, have bright, black-tinged and glossy pearls on their hoods between the fangs. A pearl born of the serpents, being worn by kings, destroy their misfortune and enemies, enhance their reputation and bestow victory. Such a gem is to be known as of inestimable value. One who wears such a serpent - gem will never have troubles arising from poison and diseases. - BRIHAT SAMHITHA OF VARAHAMIHIRA


With all that by way of introduction, here's the story from last year, as it appeared under the title "Gitchi-Kenebig and the Uktena." 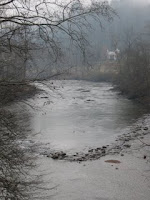 I often think about the civilizations that occupied this continent before us. We know so little of their rise and fall. It’s not easy to connect the dots and create a meaningful picture when you can barely find the dots. Once in a while, though, something happens to shine a light upon the dark mysteries.

Many months ago, I posted “gravity is the source of lightness” recounting my meanders along the Tuckasegee River to contemplate ancient fish weirs and recent stacks of stones. In that story, I mentioned Peter Waksman, who had discovered arrays of stacked stones in Massachusetts. Soon thereafter, I had the good fortune to hear from Mr. Waksman and to learn about his Rock Piles blog, which reports on unusual assemblages of rocks in New England.

A couple of weeks ago, Waksman described a recent discovery that had reminded him of something I had mentioned in my story about the Tuckasegee. I had included a photograph of the place in the river that the Cherokee called “Datleyastai” or “where they fell.” As I went on to explain, the “they” in this case were:

…two Uktena tangled as though in combat, rose from the river, and fell back into the water. Uktena, in case you’ve not seen one lately, is a monstrous snake, as big around as a tree trunk, with horns on its head, a bright, blazing crest like a diamond on its forehead, and scales glittering like sparks of fire. Whoever is seen by the Uktena is so dazed by the bright light that he runs toward the snake instead of trying to escape.
The arrangement of rocks that Waksman found near Westford, MA bore a resemblance to the Uktena with a horned head and a contrasting piece of quartz in the neck. Upon further examination, Waksman found a smaller creature following the first and it, too, had a strategically placed piece of quartz in its body.

After studying his story and photos, I consulted James Mooney (1861-1921), the anthropologist who recorded much of what we know about the Uktena. Mooney stated:

Myths of a jewel in the head of a serpent or of a toad are so common to all Aryan nations as to have become proverbial. Talismanic and prophetic stones, which are carefully guarded, and to which prayer and sacrifice are offered, are kept in many tribes.
Since it is likely that some of the Algonquin tribes were active in what we now call Massachusetts, this comment from Mooney really caught my attention:

The Uktena has its parallel in the Gitchi-Kenebig or Great Horned Serpent of the northern Algonquin tribes.
The effigy discovered near Westford just might be an Uktena, or more accurately, Gitchi-Kenebig. The piece of quartz in its head could be the magical Ulunsuti sought by the conjurer. It is fascinating to read the accounts of the earliest European travelers through Cherokee country, who wrote accounts of the talismanic stones treasured by the natives.

If you want to visit the home of the Uktena, then you should travel to Gahuti, or Cohuttta Mountain, in Murray County, Georgia. This was the place where the Shawano captive, Aganunitsi, attacked the Uktena. (Could this explain the enormous stone wall built upon the nearby Fort Mountain?) Mooney tells us:

The Shawano, who at one time occupied the Cumberland region of Tennessee immediately adjoining the Cherokee, were regarded as wizards by all the southern tribes.
Finally, D. G. Brinton explains how the Shawano shared the news of the Great Horned Serpent:

Among the Algonkins the Shawnee tribe did more than all others combined to introduce and carry about religious legends and ceremonies. From the earliest times they seem to have had peculiar aptitude for the ecstacies, deceits, and fancies that make up the spiritual life of their associates. Their constantly roving life brought them in contact with the myths of many nations, and it is extremely probable that they first brought the tale of the horned serpent from the Creeks and Cherokees.
So, do I believe there is a more-than-coincidental connection between the Uktena of the Tuckasegee and the Gitchi-Kenebig of Westford, MA?

Of course I do.

["Accounts of the talismanic stones" among the Cherokee was mentioned above. I'll be posting a story from the 1760s that describes such stones. Soon...]
Posted by GULAHIYI at 12:03 AM

what is the likelihood that the ulunsuti are still possessed by tsalagi? that would be a rather small number of people. fascinating. if they had been lost it seems that stories would exist of the loss. none of my friends consider the uktena, although i often point out to them the hole that I think is the uktena hole between bird town and katuah.

I am have been interested in the Uktena myth and all of its variations for the past 30 years. I have a play based on the myth that has been performed in Cherokee, WCU and Atlanta. While I was doing research on the Uktena, I once went to the mountain in north Georgia that has always been rumored to have been the "home of the Uktena" as well as the place where it died. The stone in the serpent's head is called the Ulensuti in Cherokee and has a vague meaning like "far away seems close" or some variation of that.
The mountain is in Murray County, Georgia, but I guess you know all of that. It was called Gahuti or Gyhuti. The park rangers told me about a strange rock wall that encircled the mountain which they had taken to be some sort of barricade. After someone told them the myth of the Uktena, they decided that it was The Uktena encircling the mountain.

P. S. There are photographs of what some Cherokee scholars think are the Ulunsuti in Charles Hudson's book on the Southeastern Tribes. I've also heard stories that these stones are scales from the Uktena and are cakked "phophesy stones." I guess you already know about the red stain that runs through the center of these stones.

Thanks, I think I have the Hudson book, though I can't find it right now. I didn't know it had photos of the ulunsuti, so I want to see that.

Anybody can see that Nagmani is actually gem on the celestial serpent's head. I will not elaborate any further. I believe the bloggers are intelligent enough to find her out.

Now that Horace Kephart's "lost" novel has been published, it is interesting to read his discussion of the Uktena and the Ulunsuti, which are a central part of the book.

Gary, it is fun to speculate about sources. That was very much the case with Charles Frazier's "Cold Mountain," since he made no secret of the original sources he borrowed from at different points in the story. It looks like Kephart's ulunsuti could have come straight from Mooney, though perhaps he heard other stories about it direct from Cherokee contacts. And to kamalctgu, I AM watching for that celestial serpent.