Sixty-nine years ago today, President Franklin D. Roosevelt spoke at the dedication of the Great Smoky Mountains National Park. Following is the text of his speech delivered at Newfound Gap, including his extensive remarks on the war that was simmering around the world. For the audio recording of the entire address by FDR, a link is included at the end of this story. (I was surprised to find that it had been recorded.) It's worth hearing, for he was one heck of a speaker:

Secretary Ickes, Governor Hoey, Governor Cooper and our neighbor, Governor Maybank of South Carolina, and my friends from all the States:

I have listened with attention and great interest to the thousands of varieties of plants, trees, fishes and animals that Governor Cooper has just told us about, but he failed to mention the hundreds of thousands of species of human animals that come to this Park.

Here in the Great Smokies, we have come together to dedicate these mountains, streams, and forests, to the service of the millions of American people. We are living under governments that are proving their devotion to national parks. The Governors of North Carolina and of Tennessee have greatly helped us, and the Secretary of the Interior is so active that he has today ready for dedication a number of other National Parks-like Kings Canyon in California and the Olympic National Park in the State of Washington, the Isle Royale up in Michigan and, over here, the Great Cavern of Tennessee—and soon, I hope, he will have another one for us to dedicate, the Big Bend Park away down in Texas, close to the Mexican line.

There are trees here that stood before our forefathers ever came to this continent; there are brooks that still run as clear as on the day the first pioneer cupped his hand and drank from them. In this Park, we shall conserve these trees, the pine, the red-bud, the dogwood, the azalea, the rhododendron, the trout and the thrush for the happiness of the American people.

The old frontier, that put the hard fibre in the American spirit and the long muscles on the American back, lives and will live in these untamed mountains to give to the future generations a sense of the land from which their forefathers hewed their homes.

That hewing was hard. The dangers were many. The rifle could never be far from the axe. The pioneers stood on their own feet, they shot their own game and they fought off their own enemies. In time of accident or misfortune they helped each other, and in time of Indian attack they stood by each other.

Today we no longer face Indians and hard and lonely struggles with nature—but today we have grown soft in many ways. 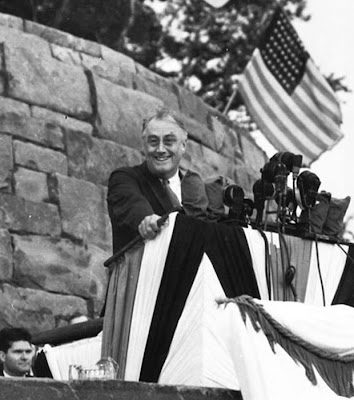 If we are to survive, we cannot be soft in a world in which there are dangers that threaten Americans—dangers far more deadly than were those that the frontiersmen had to face.

The earth has been so shrunk by the airplane and the radio that Europe is closer to America today than was one side of these mountains to the other side when the pioneers toiled through the primeval forest. The arrow, the tomahawk, and the scalping knife have been replaced by the airplane, the bomb, the tank, and the machine gun. Their threat is as close to us today as was the threat to the frontiersmen when hostile Indians were lurking on the other side of the gap. 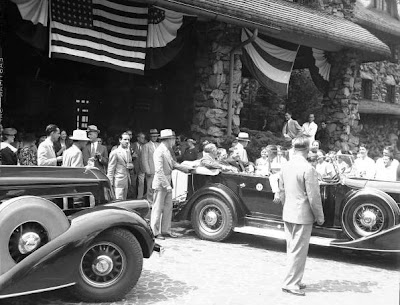 FDR enroute to the dedication


We have come to realize the greatest attack that has ever been launched against freedom of the individual is nearer the Americas than ever before. To meet that attack we must prepare beforehand—for the simple reason that preparing later may and probably would be too late.

There is, moreover, another enemy at home. That enemy is the mean and petty spirit that mocks at ideals, sneers at sacrifice and pretends that the American people can live by bread alone. If the spirit of God is not in us, and if we will not prepare to give all that we have and all that we are to preserve Christian civilization in our land, we shall go to destruction.

It is good and right that we should conserve these mountain heights of the old frontier for the benefit of the American people. But in this hour we have to safeguard a greater thing: the right of the people of this country to live as free men. Our vital task of conservation is to preserve the freedom that our forefathers won in this land, and the liberties that were proclaimed in our Declaration of Independence and embodied in our Constitution.

In these centuries of American civilization, greatly blessed by the bounties of nature, we succeeded in attaining liberty in Government and liberty of the person. In the process, in the light of past history, we realize now that we committed excesses which we are today seeking to atone for.

We used up or destroyed much of our natural heritage just because that heritage was so bountiful. We slashed our forests, we used our soils, we encouraged floods, we overconcentrated our wealth, we disregarded our unemployed—all of this so greatly that we were brought rather suddenly to face the fact that unless we gave thought to the lives of our children and grandchildren, they would no longer be able to live and to improve upon our American way of life.

In these later years we have tried sincerely and honestly to look ahead to the future years. We are at last definitely engaged in the task of conserving the bounties of nature, thinking in the terms of the whole of nature. We are trying at least to attain employment for all who would work and can work, and to provide a greater assurance of security throughout the life of the family. 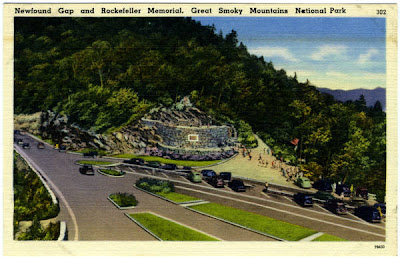 From hard experience we know that the process is a long one, but most of us realize that if we can continue our effort without serious setbacks, the ideals of the American way of life can and will be attained by working everlastingly for the good of the whole and not for the good of any one privileged group.

So, from within our own borders, liberty through democracy can, I believe, be preserved in future years if we want to preserve it.

But there is a second danger—a danger from without. I hope, for example, that one hundred years from now the Great Smoky National Park will still belong in practice, as well as in theory, to the people of a free nation. I hope it will not belong to them in theory alone and that in practice the ownership of this Park will not be in the hands of some strange kind of Government puppet subject to some strange kind of an overseas overlord. I hope the use of it will not be confined to people who come hither on Government specified days and on Government directed tours. I hope the trees will not be slaughtered by the axe in order that a Government may conduct wars of aggression against other nations. I hope that roads and paths and trails will still be built in the cause of the liberty of recreation, and not confined to the ulterior purposes of a war machine controlled by an individual or by an oligarchy.

It is not a change from the American way of life to advocate or legislate a greater and a speedier preparedness. It is a positive protection to the American way of life. You and I know that in the process of preparing against danger we shall not have to abandon and we will not abandon the great social improvements that have come to the American people in these later years. We need not swap the gain of better living for the gain of better defense. I propose that we retain the one and gain the other.

But to conserve our liberties will not be easy. The task will require the united efforts of us all. It will require sacrifices from us all. 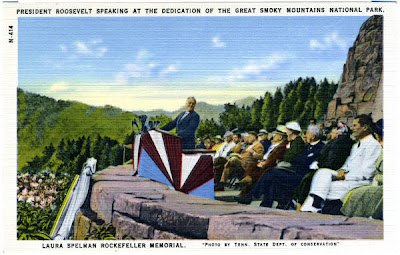 The pioneers survived by fighting their own fight and by, standing together as one man in the face of danger. If we, their descendants, are to meet the dangers that threaten us, we too must be ready to fight our own fight and stand together as one man. In hours of peril the frontiersmen, whatever their personal likes or dislikes, whatever their personal differences of opinion, gathered together in absolute unity for defense. We, in this hour, must have and will have absolute national unity for total defense.

That way of life is menaced. We can meet the threat. We can meet it with the old frontier spirit. We can forge our weapons, train ourselves to shoot, meet fire with fire, and with the courage and the unity of the frontiersmen.

It is our pride that in our country men are free to differ with each other and with their Government and to follow their own thoughts and express them. We believe that the only whole man is a free man. We believe that, in the' face of danger, the old spirit of the frontiersmen that is in our blood will give us the courage and unity that we must have. We need that spirit in this hour. We need a conviction, felt deep in us all, that there are no divisions among us. We are all members of the same body. We are all Americans.

The winds that blow through the wide sky in these mountains, the winds that sweep from Canada to Mexico, from the Pacific to the Atlantic—have always blown on free men. We are free today. If we join together now— men and women and children -to face the common menace as a united people, we shall be free tomorrow. So, to the free people of America, I dedicate this Park.

Despite the protestations of a few and the general malaise of many, the American experiment of freedom carry's a price. The founders were willing to pay it. Are we?