Andre Michaux Sets Out from Keowee

People in the Old World were always being surprised by reports from America of spiders as big as cats and birds as small as fingernails, squirrels that flew and frogs that whistled, of plants so blessed that they could cure almost any sickness and of others so strange that their discoverers were afraid to describe them, lest they be called fools or liars. Americans forested the parks of rich Europeans with sugar maples and hemlocks, filled collectors’ cabinets with mockingbirds and rattlesnakes, enlivened their gardens with fly-eating tipitiwichets and early blooming skunk cabbages. Their science was a matter of the heart as well as the mind, a way to express their feeling for their land and their countrymen’s unabashed pride in it.
- Joseph Kastner

...aromatic Calycanthean groves on the surrounding heights, the wary moor fowl thundering in the distant echoing hills, how the groves and hills ring with the shrill perpetual voice of the whip-poor-will...
-William Bartram, describing Keowee, 1775 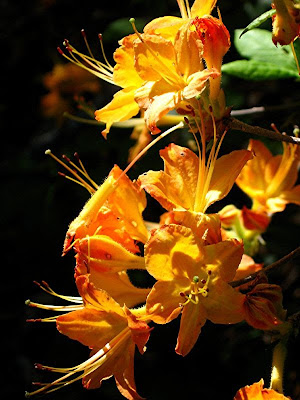 Whenever I'm on the Bartram Trail along the Chattooga or the Little Tennessee I revel in the privilege of walking in the footsteps of a flower-hunter whose ways with words inspired the British Romantics.

Thanks to Bartram’s Travels, our flame azaleas were transplanted to William Wordsworth’s poetry:

Of flowers that with one scarlet gleam
Cover a hundred leagues, and seem
To set the hills on fire.
(From “Ruth” by WW)

The question arises: if Andre Michaux had possessed Bartram’s literary talents, would he be better known today?

Michaux came to the southern mountains a decade after Bartram. As far as I know, we don't have a Michaux Trail Society. Much of Michaux’s trail is lost since Lakes Jocassee and Keowee have flooded his path along the west bank of the Keowee and the Whitewater River.

In a book on early American naturalists, A Species of Eternity, Joseph Kastner indicates the respect that Michaux commanded:

William Bartram knew him as one of the very few collectors who could go over the ground that he and his father had covered and come back with plants neither of them had found.
Michaux first explored the Carolina backcountry, and the Keowee River, in 1787. Keowee, “the place of mulberries," was principal among Cherokee Lower Towns - a mother town that was a busy center of the deerskin trade. On a contemporary map, Keowee is (or would have been) about 12 miles north of Clemson, South Carolina. Today, the old village and Fort Prince George are both submerged by the waters that cool the reactors of the Oconee Nuclear Station on Lake Keowee.

Now at this point, I must interrupt. I thought this story could be told in ONE blog post. After pursuing an infinity of rabbit trails, I realize that it could take a hundred instead.

Keowee was on the west bank of the river, just downstream from Crow Creek. In 1753, the British established Fort Prince George on the east side, across the river from the Cherokee village. By 1760, after ongoing tensions, the British destroyed Keowee. By the time of Bartram’s visit in 1775, Keowee was a ghost town. Bartram writes: 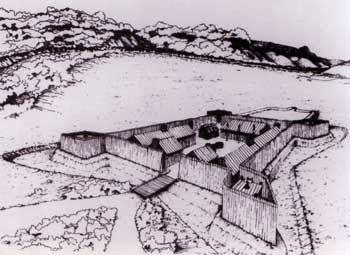 Fort Prince George, on the Keowee River
Bartram describes the Keowee valley as being “seven or eight miles in extent” and he pictures the thriving place it had been just a few years earlier:

This fertile vale within the remembrance of some old traders with whom I conversed, was one continued settlement, the swelling sides of the adjoining hills were then covered with habitations, and the rich level grounds beneath lying on the river, was cultivated and planted, which now exhibit a very different spectacle, humiliating indeed to the present generation, the posterity and feeble remains of the once potent and renowned Cherokees: the vestiges of the ancient Indian dwellings are yet visible on the feet of the hills bordering and fronting on the vale, such as posts or pillars of their habitations, &c.

Bartram remained at Keowee for a week, hoping to find a Cherokee guide to lead him safely through the mountains. He must be have been struggling with strong mixed feelings. The mid-May spectacle of “the great blue wall” was almost within reach, and yet Bartram was alone, lonely, and aware of the risk he was about to take:

Keowe is a most charming situation, and the adjacent heights are naturally so formed and disposed, as with little expensive of military architecture to be rendered almost impregnable; in a fertile vale, at this season, enamelled with the incarnate fragrant strawberries and blooming plants, through which the beautiful river meanders, sometimes gently flowing, but more frequently agitated, gliding swiftly between the fruitful strawberry banks, environed at various distances, by high hills and mountains, some rising boldly almost upright upon the verge of the expansive lawn, so as to overlook and shadow it, whilst others more lofty, superb, misty and blue, majestically mount far above. 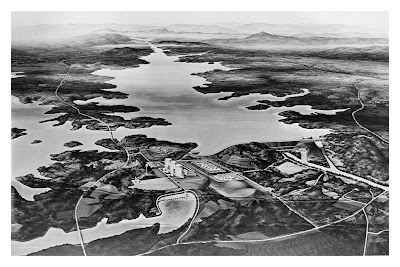 Artist's rendering of Oconee Nuclear Station in the Keowee Valley
The evening still and calm, all silent and peaceable, a vivifying gentle breeze continually wafted from the fragrant strawberry fields, and aromatic Calycanthean groves on the surrounding heights, the wary moor fowl thundering in the distant echoing hills, how the groves and hills ring with the shrill perpetual voice of the whip-poor-will! 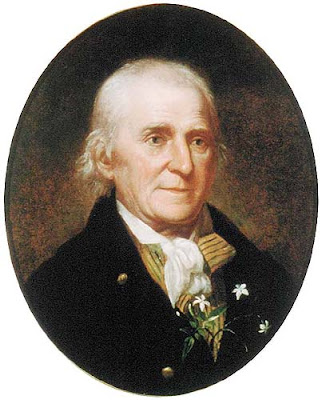 William Bartram
Abandoned as my situation now was, yet thank heaven many objects met together at this time, and conspired to conciliate, and in some degree compose my mind, heretofore somewhat dejected and unharmonized: all alone in a wild Indian country, a thousand miles from my native land, and a vast distance from any settlements of white people. It is true, here were some of my own colour, yet they were strangers, and though friendly and hospitable, their manners and customs of living so different from what I had been accustomed to, administered but little to my consolation: some hundred miles yet to travel, the savage vindictive inhabitants lately ill-treated by the frontier Virginians, blood being spilt between them and the injury not yet wiped away by formal treaty; the Cherokees extremely jealous of white people travelling about their mountains, especially if they should be seen peeping in amongst the rocks or digging up their earth.

With no Indian guides forthcoming, Bartram “determined to set off alone and run all risks.”

Leaving Keowee he travelled west toward Georgia. In 1788, Andre Michaux stopped near Keowee and did manage to secure a Cherokee guide before continued north along the river. The following entries from Michaux’s journal are translated from the French:

On December 6, 1788, I left for the mountains and I slept with my guide in an Indian village. The chief of the village greeted us courteously. He told us that his son, who was to return from the hunt that very evening, would lead us into the high hills to the sources of the Kiwi. But he did not return and this old man, who appeared to be about 70, offered to accompany me. This man had been born in a village near the sources of that river, he knew the mountains perfectly and I hoped that his son would not return. For supper he had us served fresh cooked deer meat and bread of corn meal mixed with sweet potatoes (Convolvulus batata). I ate with my guide who served me as an interpreter since he knew how to speak Indian. The chief ate with his wife on another bench. Then the mother of his wife and his two daughters, the one married and the younger one about 14 or 15, sat down around the pot in which they cooked the meat. These ladies were naked to the waist, each having no other garments than a single skirt.

On Sunday, December 7, the housewife roasted maize with hot ash sifted in an earthen pot. When it was a little more that half roasted it was taken off the fire where the mixed-in ashes went. It was then carried to the mortar and being crushed it was put into a fine sieve to separate the fine flour which was put into a sack as our provision. When someone is tired he puts about three spoonfulls into a vessel of water, and frequently adds some brown sugar or moist brown sugar. This also very pleasing tasty drink is a restorative which renews strength immediately. The Indians never go on a trip without a supply of this meal that they call. ..[Rokaharmony].

From 7:30 in the morning to 6 o'clock in the evening we marched about fourteen miles. We did not stop except for one hour for dinner. We camped on the banks of the Kiwi at the foot of hills among two genera of rhododendron, mountain laurel [with evergreen leaves], azalea [which sheds its leaves in winter], etc.

On December 8, 1788, as we were approaching the source of the Kiwi the paths became more difficult. Before arriving there I recognized the Magnolia montana which was named M. cordata or ariculata by Bartram. In this area there was a small hut inhabited by a family of Cherokee Indians. We stopped there to camp and I rushed to do some exploring. 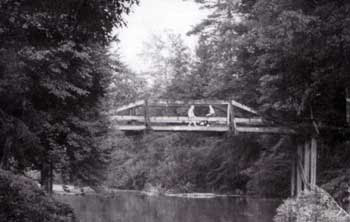 Keowee River, ca. 1936
You would think December an odd time of year to go botanizing in the Southern Appalachians, but Michaux was here for more than watching wildflowers bloom. He was collecting plants to send back to France. Since he had already scouted the area in the summer of 1787, his winter visit was an opportunity to gather seeds and roots for propagation.

This was a beautiful post. I am so interested in the stories of these early explorers like Bartram and Michaux. It is fascinating to think of the days when our continent was an unknown land, and these early men of science and literature were blazing new ground, geographically and in the mind.

I have a novel coming out in February in which Michaux is one of the major characters. Your post about Keowee has added a new dimension to my understanding. Thanks!

"Frances," thank you for that comment. I am honored. Your blog is very impressive and I look forward to that book. Coincidentally, I had just finished a piece on Michaux that brought Monsieur Genet in for a brief appearance. I'll be posting that in the next couple of weeks. Suffice it to say (as you already know) it was a case of "what might have been" with Michaux's ambitions to explore the West.

I am a descendant of Mr. Edward Wilkinson, who was a factor at Fort Prince George. I enjoyed your post while searching for info about him. I am a painter (artist) in Greenville SC. ---Joel Wilkinson

Hi, Joel, good to hear from you. That Keowee area really has a pull on my soul. Sunday, coming back from the Chattooga, I stopped at the overlook and studied the area around the nuke plant (which is so visible from so far away). So much happened around there, and though it is mostly gone (in the material sense) it lives on in words.

I'll have to stop by your studio when I'm in Greenville. I think the downtown and area along the river is so very cool. It was great fun to visit there a couple of years ago.