I used to have lots of money until it got rotten. I was not too happy. Happiness did not count on how much money you owned but what’s inside your heart.
-Gusti Nyoman Lempad 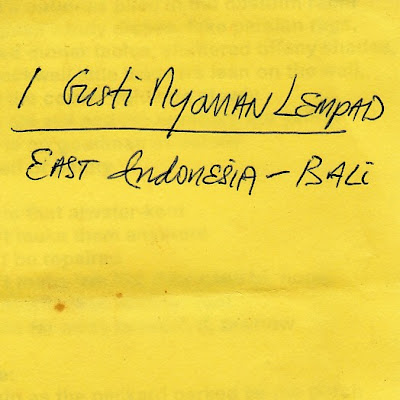 Every year or two, while going through my library, I'll come across a slip of paper that has marked places in one book after another. The handwriting is not mine, and I can't remember how this note came to me. Had a friend suggested I study the Balinese art of Gusti Nyoman Lempad? Or was the note just stuck inside a used book I'd purchased some time? 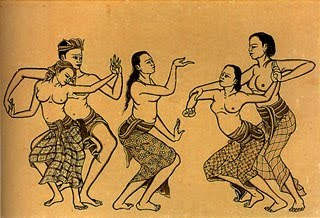 Since I'll never know, I might as well get a blog post out of it. The following video tells his story better than I can, and provides a rare visit with someone who had lived 116 years. Lempad, a stone sculptor, architect and artist produced hundreds of linear drawings, and built temples and buildings. He was illiterate, but had brilliant ideas and intellectual discussions with fellow artists.

The way he died was as interesting as the way he lived.

He chose the day on which he was going to die months in advance and on that day he called his descendants together, asked them to bathe and dress him, told them their inheritance, bade them farewell and then died. The day he chose was a holy day.

Digging a little deeper into Balinese culture, I learned this about the Balinese Monkey Chant:

Kecak (pronounced [ˈketʃak], alternate spellings: Ketjak and Ketjack) a form of Balinese music drama, originated in the 1930s and is performed primarily by men. Also known as the Ramayana Monkey Chant, the piece, performed by a circle of 100 or more performers wearing checked cloth around their waists, percussively chanting "cak" and throwing up their arms, depicts a battle from the Ramayana where the monkey-like Vanara helped Prince Rama fight the evil King Ravana. However, Kecak has roots in sanghyang, a trance-inducing exorcism dance. (From Wikipedia)

What a performance in this video!

The kecak scene is from the movie, Baraka (1992), a non-narrative film directed by Ron Fricke, who was the cinematographer on Koyaanisqatsi. Baraka's subject matter has some similarities—including footage of various landscapes, churches, ruins, religious ceremonies, and cities thrumming with life, filmed using time-lapse photography in order to capture the great pulse of humanity as it flocks and swarms in daily activity. The movie was filmed at 152 locations in 24 countries. The title Baraka is a word that means blessing in many different languages.

Here's a trailer for Baraka, and a clip of the first ten minutes of the film:


Koyaanisqatsi has been one of my favorite films since I first saw it many years ago:

Finally, I came across this video which is somewhat in the vein of Koyaanisqatsi. Very illuminating...pardon the pun:

Conscious death? Maybe someday we will learn conscious living. Mysteries abound everywhere and here. Not only have their been sightings of UFOs in Cashiers, we have some of our own mysteries here. What do you think of this blinking statue the Virgin of Guadeloupe on the grounds of the Moonlight Spa in Dillsboro (off Mockingbird Lane)? The energy there is amazing! And, there have been sightings of UFOs around Cashiers. http://skyshipsovercashiers.com/articles.htm#blinkingstatue