"He knows all the names of the stars in the skies"

The crow wished everything was black, the owl, that every thing was white.
-William Blake 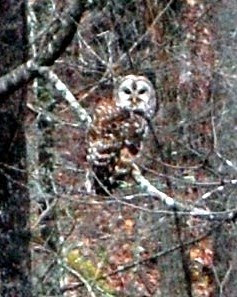 One of the many joys of my life is to listen to the owls call out at night. I hear owls much more often than I see them. Sunday, when a foggy day turned surprisingly warm, I took off to examine the neighborhood.

A flash of wings caught my attention and I turned to see a barred owl landing on a tree limb. The owl stared at me. I stared at the owl. Even though I’d left the “right” camera and the “right” lens at home, I snapped away and bagged a few grainy shots.

It is one thing to know how an owl can turn its head almost completely around and another to actually see it. The owl was facing me and then smoothly swiveled its head around until it was looking at me again...and then swiveled its head back to where it started. I stayed there for a few minutes and so did the owl. Neither of us was in any hurry to go anywhere.

When I got home, I started looking up “owl poems.” This one sounds like something we might have heard in second grade, but I like it:

The diet of the owl is not
For delicate digestions.
He goes out on a limb to hoot
Unanswerable questions

And just because he winks like men
Who utter sage advice,
We think him full of wisdom when
He's only full of mice.

The warping night air having brought the boom
Of an owl's voice into her darkened room,
We tell the wakened child that all she heard
Was an odd question from a forest bird,
Asking of us, if rightly listened to,
"Who cooks for you?" and then "Who cooks for you?"

Words, which can make our terrors bravely clear,
Can also thus domesticate a fear,
And send a small child back to sleep at night
Not listening for the sound of stealthy flight
Or dreaming of some small thing in a claw
Borne up to some dark branch and eaten raw. 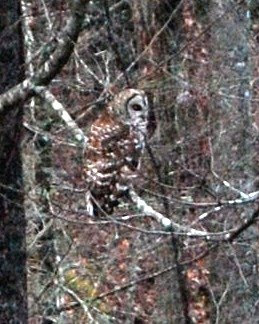 Based on his observations from travels through the Southeast, William Bartram wrote a “description of the character, customs and persons of American aborigines.” While he did single out specific tribes in some cases, he also made generalized statements based on his contact with the “Cherokees, Muscogulges, Siminoles, Chactaws and Creeks.” He does not elaborate on where he witnessed this ceremonial activity:

THE junior priests or students, constantly wear the mantle or robe, which is white, and they have a great owl skin cased and stuffed very ingeniously, so well executed, as almost to represent the living bird, having large sparkling glass beads, or buttons fixed in the head for eyes: this insignia of wisdom and divination, they wear sometimes as a crest on the top of the head, at other times the image sits on the arm, or is borne on the hand. These bachelors are also distinguishable from the other people, by their taciturnity, grave and solemn countenance, dignified step, and singing to themselves songs or hymns, in a low sweet voice, as they stroll about the towns.

Alas, what we have lost in the comforts of our modernity!

Bartram refers to "cliffs of rocks" on the ocean in the area of the NC/SC border. There is a historical marker at this location, named the Hurl Rocks, and I remember seeing them last in the 1980's (also the last time I saw the periodically visible hull of a shipwreck at MB).

I think that the Hurl Rocks are now covered by a (I hate this term) "beach nourishment" effort.

That's a new one to me. I've been thinking I need to revisit Bartram, especially his writings from beyond the mountains. In addition to the Frances Harper editions of "Travels" I have a pretty good guide that helps to fix the locations he describes. It sounds like I should take a field trip to the beach! I'm a little afraid to see what they done to my beloved Sunset Beach by building that damned bridge to the island.