And the LORD God prepared a gourd, and made it to come up over Jonah, that it might be a shadow over his head, to deliver him from his grief. So Jonah was exceeding glad of the gourd.
-Jonah 4:6 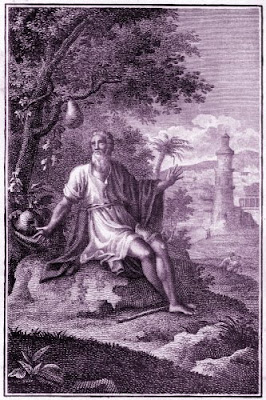 Being blessed with pure, sweet water from a deep well, I have a welcome alternative to the nasty TWSA water that’s chock full of chlorine, fluoride, aluminum sulfate, and who-knows-what other toxins. Every morning I fill my handy bottle without stopping to think that it could be dosing me with BPAs. Maybe I should make the switch to stainless steel or glass.

Reading that plastic bottle again today, I considered the logo: “Cyclone Hydration Gear." No doubt, a lot of folks have put a lot of thought into “hydration gear.” 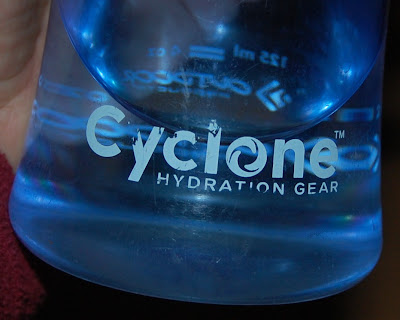 Let me clarify that.

A lot of folks have put a lot of thought into how they can make a lot of bucks from “hydration gear.” The ingenuity of American entrepreneurship crams as many levels of profit-takers as it can between cool, clear water and our collective parched lips. But why should I raise a fuss about it? Like Congressman John Boehner says, Americans need to get on with "their job of being good consumers." So buy as much unnecessary crap as you can. It's your patriotic duty.

Maybe my problem is I’m old enough to remember a time before we had “hydration gear.”

Let me clarify that.

I’m old enough to remember a time before we had anything we called “hydration gear.” Way back then, we had something we called a “drinking gourd.” I remember a wide spot by the road near the aptly named village of Richfield. There, surrounding by fertile farmland, a spring bubbled up out of the ground. Like many people, I would stop there for water. Conveniently, a drinking gourd, or “dipper gourd” if you prefer, hung from a rusty nail on a post beside the spring. Nowadays, we would call it “hydration gear.” 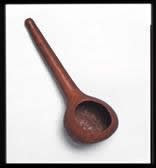 I’ve been intending to grow gourds in the garden, although they prefer a longer growing season than what we get in these mountains. Maybe this year, I’ll give them an early start and hope for the best. I sure would like to drink from one of those gourds again.

If I do harvest those gourds, I will count it a small act of rebellion. I can grow my own hydration gear! By golly, I can drink water without any help from those meddlesome middlemen that want to put price tags on every single thing in the world. Like Jonah, I will be exceedingly glad of the gourd.


Zora Neale Hurston borrowed the Biblical reference to gourds for the title of her first novel, Jonah's Gourd Vine. 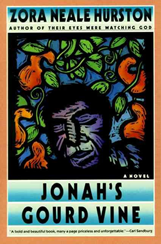 Unfortunately, the otherwise infallible King James version of the Bible mistranslated the Hebrew word, qiqayon. It did not mean gourd, after all, which makes sense when you consider the gourd was a New World plant that didn’t make it across the Atlantic before Columbus. In all likelihood, the plant that came up over Jonah and delivered him from his grief was a castor-bean tree.

I have to admit that until now, I didn't know the meaning behind the old song, "Follow the Drinking Gourd." Runaway slaves on the Underground Railroad were told to navigate their way to freedom by following the Big Dipper constellation, aka "the drinking gourd." Richie Havens sings and plays it beautifully.


Finally, I thought I would have an easy time of finding some evocative illustrations of drinking gourds for this story. It wasn't as easy as I had expected. I thought for sure I would find a gourd among the late Hubert Shuptrine's paintings in Jericho, The South Beheld. Surprisingly, there was nary a one. But if I ever write a story on rusty buckets, that book is full of them. I went through my Eric Sloane books and found hayrakes and butter molds and spokeshaves, but no drinking gourds.

As it turns out, Hubert's son Alan did get around to painting gourds, and although they're not quite dipper gourds, I'd say they belong here. 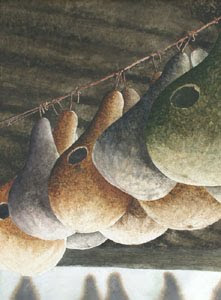 I believe they are what we would call "avian domiciliary gear."

In case growing them in your garden strikes you as too much trouble, then the "men who sold the world" have a solution to that as well. 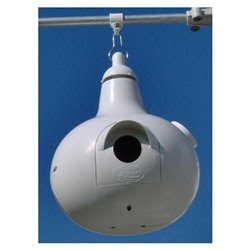 ...BUT WAIT! IF YOU BUY TODAY, WE'LL SEND YOU A SECOND NATURELINE PLASTICRAFT MANUFACTURED GOURD...