I've been looking back over Ruminations 2009 and thinking I might close out the year with some blasts from the past. Back on January 11, Krystle Cole taught us how to milk a toad. 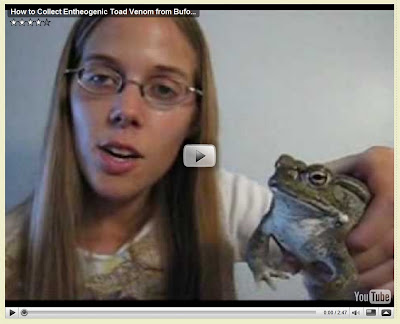 Unfortunately, that video is no longer available.

Fortunately, in a series of very informative and helpful videos, our friend from NeuroSoup still has a lot to say about expanded consciousness:

"What is this reality, anyway, but an illusion?"

Next, a story about mescaline, which was the subject of Aldous Huxley's The Doors of Perception. Here's how Mr. Huxley saw the future in which we live:

And it seems to me perfectly in the cards that there will be within the next generation or so a pharmacological method of making people love their servitude, and producing ... a kind of painless concentration camp for entire societies, so that people will in fact have their liberties taken away from them but will rather enjoy it, because they will be distracted from any desire to rebel by propaganda, brainwashing, or brainwashing enhanced by pharmacological methods.