Way Down Upon the Pee Dee River 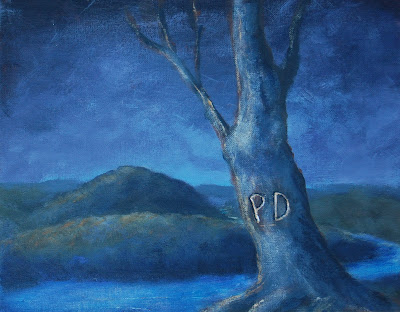 Why this Pee Dee River obsession? What I haven’t spelled out is that I grew up seven miles from the point where the Yadkin River becomes the Pee Dee, at the confluence of the Uwharrie River on the eastern border of Stanly County, North Carolina.

So, the river and I go back a long way.

I recognize that “Pee Dee” is a comical name. A minor piece of lore when I was a kid concerned the original wording of “Old Folks at Home,” the Stephen Foster song that goes “Waaaay down upon the Swaaaanee River…”

Although Florida adopted Foster’s composition as their state song in 1935, my people took pride in the knowledge that Foster’s first version went “Way down upon the Pee Dee River.”

There was no reason for me to doubt the story. Now that I’m older and more skeptical, I set out to verify (or debunk) the Stephen Foster tale. In short order I found an image of Foster’s manuscript draft for the song. Clearly, the name “Pedee” is written on the page and, clearly, it was lined out and replaced with “Suwanee.” 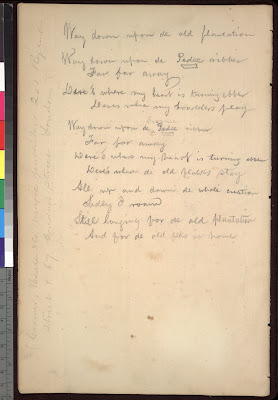 When Foster wrote the song in 1851, several popular songs were set on the Pee Dee River. I’ve already found references to three other Pee Dee songs, but that’s another story for another day.

Today’s question is “How did the river get that funny name: Pee Dee?” 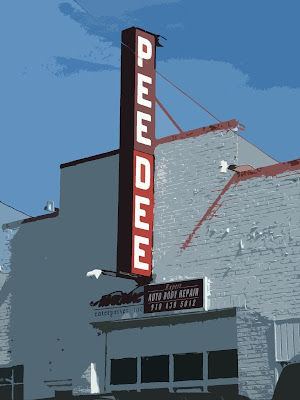 Most explanations I’ve seen claim the river was named for the Pee Dee (or Pedee) Indians.

I now present an alternate theory. Of all my research the past few years, one of the top two or three best “finds” was an 1845 magazine article that explains the origins of place names in the Carolinas. I am uncertain about the reliability of the article but it contains details of this region’s history I’ve never read anywhere else. And that’s definitely the case when the article turns to the Pee Dee:

In connection with this subject it will be somewhat curious to trace the history of some of the more modern names of places, in our country, to show how they came, and from whom they were derived. We have before us a manuscript, written by a very old and worthy citizen of North-Carolina, which is entirely yielded to this subject. Portions of this MS. we shall copy without alteration or amendment. The writer makes no argument, has no theory, is no ways essayical. He proceeds, simply, as a matter of business, to record what he has seen and heard, and knows, in relation to the first discovery, and the naming of well known places in the two Carolinas since their European settlement.

"In the year 1792,1 received the following information from a man named Blewett, who was then about seventy years of age, and who had been raised at some place below Fayetteville, N. C. He said that a company of hunters had made an excursion from his neighborhood up the country to the river now called the "pee Dee;" that they went up the river to an Indian crossing-place, near the "Grassy Islands, and on the side of the Indian path on the bank of the river, one of them, named Patrick Dale, or Daily, engraved with his knife the initials of his name, on the bark of a beach tree, [P. D."] which stood on the side of the path. This served as a direction to future travellers, to direct them where the path leads to, and the river was afterwards called Pee Dee, up, as high as the mouth of Huary;" (Ewharie—on the maps Uwharee—a stream which empties into the Pee Dee in Montgomery county, North Carolina.') "It then changed its name to that of Yadkin from a hunter of that name, who hunted near to the Shallow Ford."

Pee Dee has been usually thought an Indian name; it is difficult now to settle the question. The old maps, land documents, treatises. &c., previous to 1720, would be authorities. The story of Patrick Daily is sufficiently plausible, though we prefer to believe in the Indian paternity of the Pee Dee.


There you have it. Despite my own doubts about the Patrick Daily origin of “Pee Dee” I want to believe the story is true. But even if I’m not ready to correct possibly mistaken beliefs about how the Pee Dee got its name, I can correct the “official lyrics of the state song of Florida”:

Chorus
All de world am sad and dreary,
Ebry where I roam,
Oh! darkies how my heart grows weary,
Far from de old folks at home. 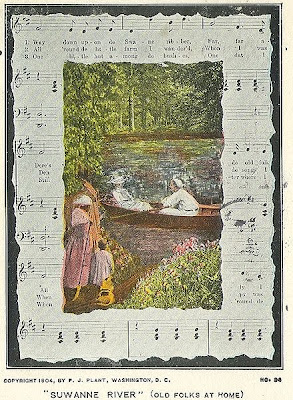 2
All round de little farm I wandered
When I was young,
Den many happy days I squandered,
Many de songs I sung.
When I was playing wid my brudder
Happy was I
Oh! take me to my kind old mudder,
Dere let me live and die.

3
One little hut amond de bushes,
One dat I love,
Still sadly to my mem'ry rushes,
No matter where I rove
When will I see de bees a humming
All round de comb?
When will I hear de banjo tumming
Down in my good old home?

The following performance is really classy. It's just too bad Deanna Durbin got the name of the river wrong.

[Click here for all stories on Gaddy's Geese.]
Posted by GULAHIYI at 12:01 AM

Deanna Durbin's rendition of this beautiful song is the best I have ever heard!

Same here. She was a lovely lady with a lovely voice.

Half a mile down Uwharrie River...

My great aunt Chris is the lady who wrote My Pee Dee River Hills. My grandmother is Liz in the book. Her real name was Elizabeth. I learned a lot about my family while reading the book. My great grandfather , their father, built a house there in town that still stands today. Elizabeth visited it shortly before her death on December 22nd 2010. She is missed dearly.