hellbent – "stubbornly and often recklessly determined or intent to do or achieve something." The word has been traced back to 1835. 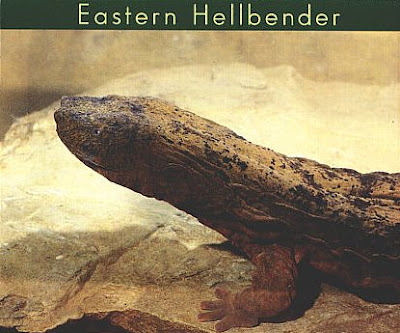 Since the subject of hellbenders has come up, I’ve wondered how they got that name. Is it related to their alleged ability to withstand fire? Or what? And how, exactly, does one “bend hell?” Here’s about the extent of what I’ve found:

The origin of the name "hellbender" is unclear. The Missouri Department of Conservation says:
"The name 'hellbender' probably comes from the animal’s odd look. Perhaps it was named by settlers who thought "it was a creature from hell where it’s bent on returning".

Another rendition says the undulating skin of a hellbender reminded observers of 'horrible tortures of the infernal regions'. In reality, it’s a harmless aquatic salamander." 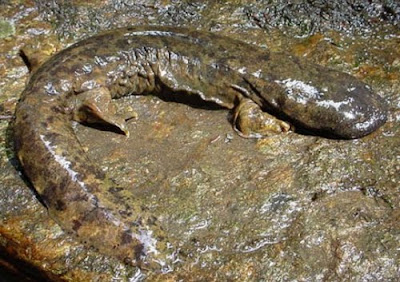 I’m told, as well, that hellbenders aren’t the same thing as mudpuppies.

*Now, here we go with another interesting word - vulgo. I found two trains of thought leaving this station:

Not necessarily an "either/or" proposition with those two definitions, eh?

Photos of hellbenders and two dozen other eastern salamanders at:
http://biodiversity.wku.edu/salamanders/Salamander_Thumbnails.htm

When I was on my "occult" bender, (there is another interesting variation on "bent."), I was always running into references to salamanders that lived in fire. Alchemists would mention them as though they were always sleeping in the coals of their fireplaces.