I had a mystery to solve yesterday. Traffic on this website exploded, and I wasn’t sure why. I did see that people who had googled “Judaculla Rock” were coming here in droves. 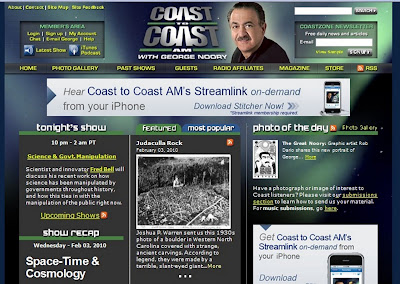 To find out, I added a note to the particular post that was attracting attention – The Stories on the Rock - and in response, one kind reader explained that the Caney Fork petroglyph had been featured on the website for Coast to Coast AM with George Noory.

I remember listening to that radio show several years ago when I was burning up the roads at night. If you don’t want to hear about Area 51, tin foil hats and black helicopters, then you’d be better off tuning into political talk radio from Sean Hannity or the even more toxic Michael Savage.

Although I’d listen with a skeptical ear, I could always count on George Noory for something unusual and different. 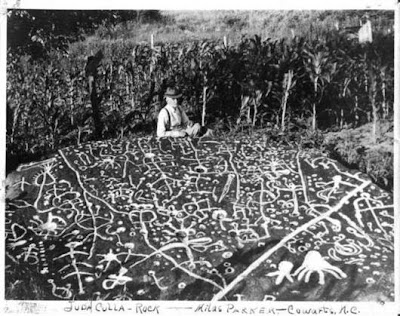 Anyhow, this week, Coast to Coast posted a picture of our favorite rock, along with this caption:

Joshua P. Warren sent us this 1930s photo of a boulder in Western North Carolina covered with strange, ancient carvings. According to legend, they were made by a terrible, slant-eyed giant. However, Warren thinks they might represent ancient depictions of microscopic life. For detailed comparisons, and other pics related to his investigation, visit JoshuaPWarren.com.

As it turns out, I posted the story of Warren's theory three years ago in Judaculla's Microscope. 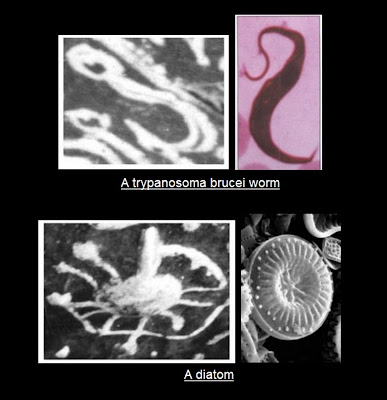 Side-by-side images support the idea that the carvings on Judaculla Rock (left) depict microscopic critters (right). See more of these at http://shadowboxent.brinkster.net/judacullatheory.html 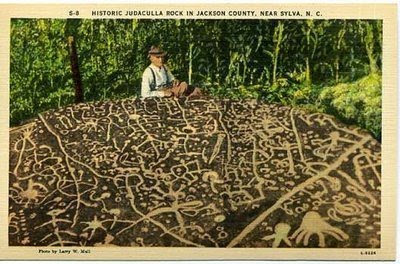 Your site "just exploded" you say? Damn, I wish mine would. I guess old Judaculla needs to come back and write another message with diamond tipped fingernail ... maybe on the side of the new library.

Oh. It's all relative. 220 visits yesterday seems like a lot to me. Those George Noory fans have a healthy sense of curiosity.

While the petroglyphs are clearly organic and resemble microscopic critters, most of the shapes can also be found in numerous higher forms of plant and animal life, both aquatic and terrestrial, that could have been observed for centuries in the Tuckasiegee area.

These organic forms were first described scientifically (geometrically and algebraically) a century ago by Jay Hambidge (and since then by others) as “dynamic symmetry”—the basic building blocks of the universe—the mathematical archetypes of the art and science of natural organic forms and patterns.

You can Google phrases such as “Jay Hambidge” and “dynamic symmetry” and find worldwide and centuries-old examples of artistic constructions and depictions among all cultures based on basic organic forms and patterns in nature.

So, my theory of the rock is that humans were engaging in creative graffiti by carving the basic forms and shapes and patterns they saw in the plant and animal world around them (leeches, tadpoles, flower parts, corn tassels, salamanders, turtles, assorted worms, dragonflies, assorted insects with antennae and gossamer wings, freshwater clams and mussels, etc).

Either that, or Judaculla did it.

I've chipped away at the rock quite a bit (figuratively and not literally) and have tried to pass along every explanation I could find.

That's an interesting perspective you bring to it and I'm looking forward to following up those references.

I know that the markings were limed or chalked in those old pictures, but it's hard to see that degree of detail when you look at the rock today.

Considering the amount of erosion that has (apparently) taken place over the last 70 years, I have to wonder just how ancient the carvings might be. Far be it from an ignorant person like me to question the professionals, but if the carvings are a thousand years old, then how do we explain the recent rapid deterioration? Acid rain, perhaps?

I forget whether or not I've written about another nearby, and very different, petroglyph. I have my own semi-serious theories about the sginificance of that one. Maybe I'll post something on that one soon.

Here are some more words and terms to Google: phyllotaxis, plant patterns, plant pattern morphogenesis, fibonacci sequence in nature..... The photos under the Google Images for these searches show a lot of patterns in nature similar to those on the rock.

Imagine that the people who carved the Judaculla petroglyphs had perhaps never seen "art works" by anyone other than themselves and people of similar cultures with whom they visited and traded. If they were going to "draw" something on the rock, it would likely be familiar shapes, patterns, and forms of their world.

Also, the major forms would be all they could capture in a rock carving because carving finer details would be prohibitive. Even so, before deterioration of the rock, the indentations must have been much deeper and more detailed than they are now.

By the way, Jay Hambidge's young widow Mary Hambidge is the artist who started the Hambidge Center just out of Dillard, Georgia, more than a half-century (?) ago. It is a 600+ acre retreat for all kinds of artists, and they still operate a grain mill. We used to take corn down there for grinding into meal for cornbread and grits. (They have a website.)

It IS smaller than it looks in the photos. Here's what I mean. Much of what you see in the old photos is now underground because soil has washed in around the rock.