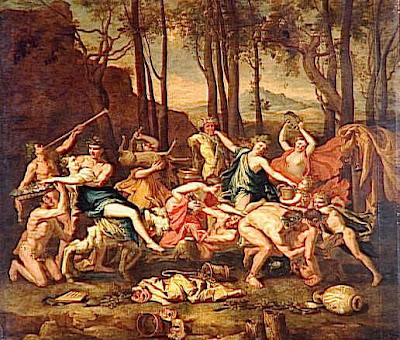 I spent the hour of spring’s arrival visiting the magical home of Shortia galacifolia.

But nearby, frisky amphibians found their own way to celebrate the turn of the season.

They announced themselves with a thousand high-pitched trills. I didn’t recognize the sound at first. Then I remembered a small pond farther along the trail.

However, it sounded like a pond at sunset, and not the early afternoon.

Getting closer, I heard – and saw – them all around the water’s edge, singing, swimming, cavorting… 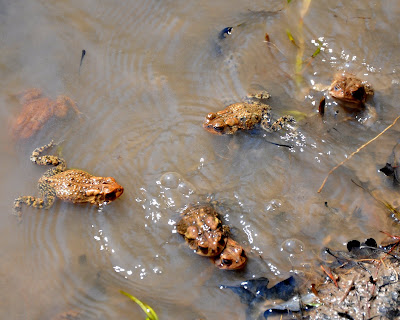 Hundreds and hundreds of them!

After I returned home, it was time to brush up on some basic facts about these creatures.

Initially, upon seeing them in the water, I thought “frogs.” But that was incorrect.

For one thing, frogs have smooth, wet skin while toads have dry, warty skin. Female frogs lay their eggs singly, in clumps on the surface of the water while female toads lay them in long strings like the ones I had seen coiling under the water.

I figured I was safe from violating any Blogger terms of services in posting these photos since they didn’t feature any full frontal toad nudity. Evidently, that’s a moot point though:

If you have ever seen a frog or toad up close you will realize that it is nearly impossible to tell males from females because they have no external genitalia. Instead, both males and females have a single opening, called a cloaca, which is a common opening for the digestive, urinary and reproductive tracts.

Generally speaking, the mating process begins when males go to a body of water and begin to call. Each species makes a unique type of call, but even within a species the sound of a frog's call can be different from one to the next. The calls you hear are very important in the process of frog and toad mating. 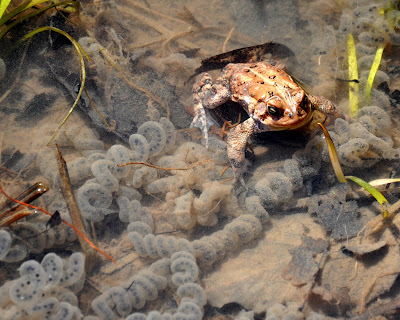 The large egg-laden females make their way to the pond, lake, or stream attracted by the males calling from there and look for a mate. The female must be choosy, because she has many eggs that can only be fertilized by one male.

Once she has selected her mate, the female allows the male to climb on her back. She, by nature of the fact that she has to carry so many eggs, is larger than the male. He grasps her underneath her front arms and holds her tightly with his thumbs (which are large during the mating season) in what is known as amplexus. With the male on the female's back, their cloacae are lined up perfectly. Then, as the female begins to lay her eggs from her cloaca the male releases sperm from his cloaca and fertilizes them. This completes the mating process. 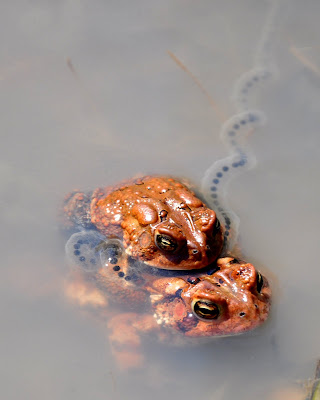 The gelatinous strand of eggs can be up to four feet in length.

Most of the eggs hatch in about 10 days, sometimes sooner if the temperature of the water is above 70 degrees Fahrenheit. The tiny tadpoles rest for a few days, receiving nourishment from the yolk sac stored in their bellies. As they develop in the pond, most of them eat aquatic plants, especially algae, as they develop.

Tadpoles have gills, similar to fish, covered and protected by a flap of skin. As they continue to develop, their hind legs form and grow. Then their tail begins to shrink and the front legs appear. Soon the gills are gone, and the tadpole begins to breathe air at the surface, with his brand new lungs. Soon after transforming into froglets or toadlets, they begin life out of the water.

And about the sound I was hearing:

Both frogs and toads have voices and make a sound. Both a male toad and frog produces his call by a rapid back-and-forth movement of air over his vocal cords. And both toad and frog will close its mouth and nasal opening and force air from its lungs into the mouth, then force the air back over the vocal chords into the lungs. Because they are able to do this, it enables these animals to vocalize even under water. They use their enlarged throat or expandable vocal sac to resonate their calls. 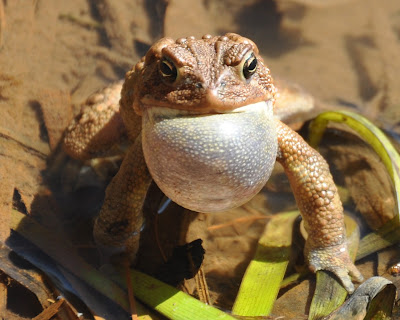 American toads have one of the most pleasing of all animal calls, sounding something like the long trill of a cricket, but with a much more melodious tune. When several toads call together, as is often the case, the resulting chorus is one of nature's grandest performances.

I did observe that these amphibians were less skittish than most frogs I’ve seen. Like most toads, they were patient photographic models. While toads lack the advantage of quick getaways, they compensate for that:

Frogs jump far to try and escape a predator, but a toad cannot jump as fast as a frog. So a toad defends himself by producing toxic or unpleasant tasting skin secretions, which are released when an animal is seized. Because of their bad flavor, toads are not a popular food among predators. Even their eggs and tadpoles are toxic.

Although frogs also have skin glands which cause them to have a bad flavor, the secretions are not as strong as those of toads. So, of course, frogs are eaten by a much larger variety of predators.

People are generally not affected when these secretions get on their skin. However, if they rub their eyes right after handling a toad or frog, a very nasty burning sensation will be experienced. So always wash your hands after you handle a toad or frog. But the age-old myth that toads can cause warts is not true!

The arrival of Spring 2010 was a memorable one, indeed. And to the many toads and toads-to-be in that little forest pond I wish good health, long life and much hoppiness.

There you have it. Now I can call myself a wildlife photographer, in more than one sense of the word.

The following video from http://www.wildlifetheater.com/ is pretty tame compared to the spring rites I observed at the pond…but the musical soundtrack is pretty funny (as is the dog):