While hiking through a spruce-fir forest recently, I watched an insect land on a leaf. 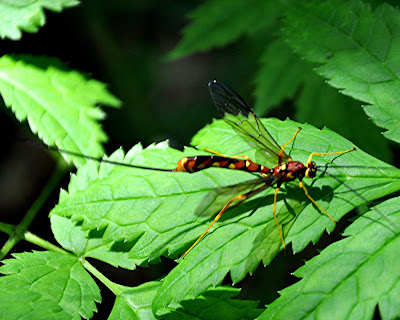 This one caught my attention because of its large size, its lurching movements and the two-inch long “stinger” emerging from its rear. The critter looked downright deadly as it moved rapidly from leaf to leaf.

I hesitate to post these photos because they are of such poor quality, but I had difficulty getting my camera focused in time to snap a picture. As shown in one of these pictures, the bug would arch its long body toward its head and wave that wicked looking weapon in an impressive display. 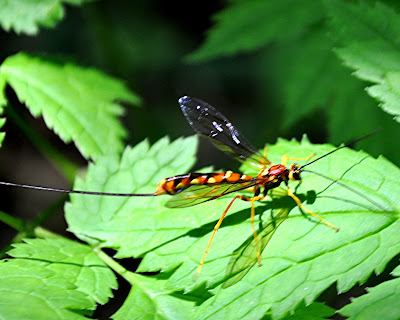 If my post-hike research is correct, the imposing insect was a mayfly. The depth of my ignorance is staggering - I knew virtually nothing about mayflies until I perused a few references on this creature.

First, the “stinger” was not a stinger at all, but a long – and harmless – tail.

I’ve subsequently learned just enough about mayflies to commend them as neighbors worth knowing. 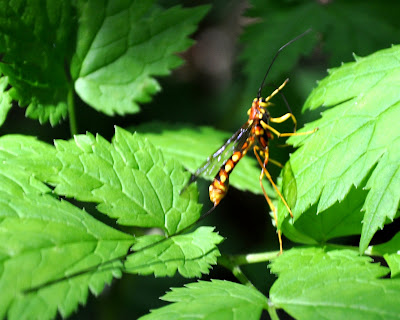 Although I would have used other words to describe my spruce-fir mayfly, many people call them “delicate and graceful.” This video, a clip from "Bugs of the Underworld" (Ralph & Lisa Cutter, DVD, 37 minutes) reveals the diversity and beauty of mayflies. The Cutters’ extraordinary underwater cinematography follows the life cycle of these unique insects, and it is quite a story.

A great diversity of mayflies are native to the Southern Appalachians but they are highly susceptible to water pollution. http://www3.interscience.wiley.com/journal/112677127/abstract?CRETRY=1&SRETRY=0

To make up for my less-than-stellar pics, I found two collections of exquisite mayfly photos.
They are intricate, colorful, varied, jewel-like miracles:
http://www.fotopedia.com/en/Mayfly
http://fiveprime.org/hivemind/Tags/ephemeroptera,mayfly

Finally, I came across this old publication:

Back in the time of Aristotle, the Greeks applied the name Ephemeron to an insect we know as the Mayfly, because it lived only a single day.

Actually, although the winged adult may die the same day it matures, the young which produces it must go through an underwater existence ranging from several weeks to two years, depending on the species.

The Greek name was quite apt, however, because the adult mayfly is a delicate defenseless creature with a pair of gauzy triangular wings held upright when at rest, and a smaller second pair which are often overlooked. The soft slender body varies in length from one-quarter
inch in the smaller kinds to one and one-half inches in the larger ones, and is tipped with two or three bristle-like tails, often twice as long as the body, which small boys mistakenly call "stingers".

Mayfly eggs hatch into water-dwelling six-legged larvae with seven pairs of gills. Some species, the "sprawlers", are flattened and streamlined for clinging to rocks in swift streams.

Another group, the "clamberers", are found among weeds in the quiet water of lakes or stream pools and, because they are out in the open, make an important part of the diet of fish.

A third group, the "burrowers", are large larvae reaching two inches or more in length and living in soft bottom muds where they slowly tunnel through the mucky silt -- literally eating" their way, like earthworms. These are often dredged up and sold as bait, called "wigglers", especially to ice fishermen seeking perch and bluegills.

Adult mayflies, with only feeble imperfect mouthparts, do not eat but all mayfly larvae have chewing mouthparts by which they feed on algae and other plant material, both alive and dead. As these larvae approach maturity they become hunchbacked from the swelling wing
pads beneath the outer skin, and increasingly restless. Finally they swim or crawl to the surface. There, the skins of some species split so swiftly that the adults almost explode from their juvenile husk; others must struggle for several minutes to free themselves.

Mayflies are unique in that the winged adult passes through another molt before it becomes fully mature. Emerging from the water, they fly to some nearby tree, bush or other shelter where they rest for a day or more, depending on the weather, before this final molt. Then these "duns", as fishermen call them, shed their dull gray skin and appear in colors ranging from pure white, through shades of yellow, green, brown and red to almost black. On that day, as evening approaches, they go through their mating flights, lay their eggs -- and die.

Some kinds dive to drop their eggs on water; others drop them from high in the air; while still others light on the surface to lay their eggs.

In many trout streams unusually good fly fishing for brown trout can be had when certain of the large burrowing mayflies swarm and go through their brief performance.

Mayflies are found in most parts of the United States but are more abundant and show a greater variety of kinds in the Great Lakes region. They are food for many birds, bats, toads and dragonflies, as well as fishes. Many artificial flies used by anglers are imitations of
the mayfly. Different species hatch at intervals from March to November but along our Chicago lake front the largest swarms appear about the first of July. Then they flock to street lights and store windows at night, often forming heaps a foot or more high and making pavements dangerously slick with their crushed bodies.

Immortality awaits an ode to Ephemeron.
Posted by GULAHIYI at 7:01 AM

While I know almost as little about fly fishing as I do mayflies. I seem to recall that almost everything I have read about fly fishing always talks about mayflies and the time that the hatch as being a great time for fishing. Seems trout like those little critters.

I've been reading your blog for sometime now and I just want to say how much I enjoy it! I love the way you mix history, hikes, photography, music... and so on. I live in scum-sucking Charlotte NC, and do so miss the NC mountains. For 30 years hubby and I lived in paradise on earth, but moved away to make money. It costs so much to live here that it seems like all we have made for ourselves is a miserable life. I look forward to your blog as it helps me remember my old life. Thank you so much and my best to you!

Jim, I think you're right about the mayflies and trout. That's where I've heard them mentioned the most, too.

And Diane, thanks for the comment. I keep thinking this blogging is a bad habit I should break, but I keep at it for some reason. It is good to know you've enjoyed it. There ARE some things I come across that deserve mention (the way I see it) and so maybe this can be one tiny counterbalance to all the supposedly "IMPORTANT" stories that get so much attention in our culture (stars and starlets and scandals and all the rest). To get delight from crossing paths with a bug isn't something that many people understand...so I tend to keep my mouth shut and get these things off my chest via this blog. So thanks again. I used to know my way around Charlotte (having grown up in Albemarle) but I'd get lost there now for sure!

love your blog. this is a wasp. the tail is an ovipositor! the female may bore this thing deep into the stem of a twig and deposit an egg on the larvae of beetles or other insects living within the twig. fascinating story of nihilist indifference. i can tell you it is an ichneumonid wasp but offer nothing more alas

somewhere on this page you may find a more precise answer

Thanks for the clarification, Litobrancha. I did notice that it had one "stinger" while mayflies have two or three. But now that I see photos of the ichneumonid wasp, it is very clear. Yet another interesting life story, for certain -
http://mdc.mo.gov/conmag/2002/05/30.htm

I'm late! I was gonna tag this as a member of the ichneumonidae also.

I'm fortunate that alert readers help me out with some of these IDs.