Belonging to a Landscape

From "Settling Down," by Scott Russell Sanders: 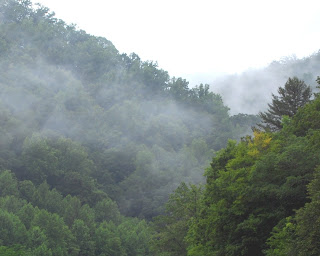 As I write this, I hear the snarl of earthmovers and chain saws a mile away destroying a farm to make way for another shopping strip. ...The elderly woman who owned the farm had it listed in the National Register, then willed it to her daughters on condition they preserve it. After her death, the daughters, who live out of state, had the will broken, so the land could be turned over to the chain saws and earthmovers. The machines work around the clock. The roaring abrades my dreams. The sound is a reminder that we are living in the midst of a holocaust. I do not use the word lightly. The earth is being pillaged, and every one of us, willingly or grudgingly, is taking part. We ask how sensible, educated, supposedly moral people could have tolerated slavery or the slaughter of Jews. Similar questions will be asked about us by our descendants, to whom we bequeath an impoverished planet. They will demand to know how we could have been party to such waste and ruin. They will have good reason to curse our memory.

What does it mean to be alive in an era when the earth is being devoured and in a country which has set the pattern for that devouring? What are we called to do? I think we are called to the work of healing, both inner and outer: healing of the mind through a change in consciousness,healing of the earth through a change in our lives. We can begin thatwork by learning how to abide in a place. I am talking about an active commitment, not a passive lingering. If you stay with a husband or wife out of laziness rather than love, that is inertia, not marriage. If you stay put through cowardice rather than conviction, you will have no strength to act. 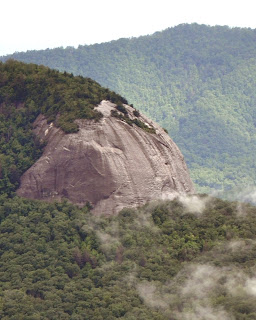 Strength comes, healing comes, from aligning yourself with the grain of your place and answering to its needs. "The man who is often thinking that it is better to be somewhere else than where he is excommunicates himself," we are cautioned by Thoreau, that notorious stay-at-home. The metaphor is religious: to withhold yourself from where you are is to be cut off from communion with the source. It has taken me half a lifetime of searching to realize that the likeliest path to the ultimate ground leads though my local ground. I mean the land itself, with its creeks and rivers, its weather, seasons, stone outcroppings, and all the plants and animals that share it.

I cannot have a spiritual center without having a geographical one; I cannot live a grounded life without being grounded in a place. In belonging to a landscape, one feels a rightness, at-homeness, a knitting of self and world. The condition of clarity and focus, this being fully present, is akin to what the Buddhists call mindfulness, what Christian contemplatives refer to as recollection, what Quakers call centering down. I am suspicious of any philosophy that would separate this-wordly from other-wordly commitment. There is only one world, and we participate in it here and now, in our flesh and our place. 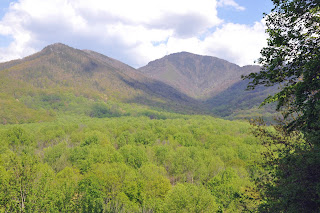 "Settling Down" was published in Sanders' book, Staying Put, Making a Home in a Restless World (1994).
Posted by GULAHIYI at 12:01 AM

Little tourist towns way up in the mountains
With fancy-pants cafes and snooty up-scale bistros.
“Come save with us—our prices rolled back!”
Smiling, sweating shop owners chasing the almighty dollar.
While regular, poor folks, willing to work for an honest day’s wages
Fret and starve back up in the hills.

Empty store fronts and half-constructed tacky hotels,
Money-hungry small-town politicians bowing and scraping
At the beady-eyed millionaire’s feet.
Meanwhile, back in the coves and hollers,
Hidden from all but the most perceptive gaze,
Grows a burning anger in the hearts of the people.

I hear the digging everyday. the mountainside was scrapped clear of most trees and small bushes. now the digging to lay cable for the ridgetop houses with the view causes Mother Earth to resist at her more solid rock level; yet being altered by the front hoe pounding at her core. A sadness with the burning anger.