One Dies, Get Another - Part One 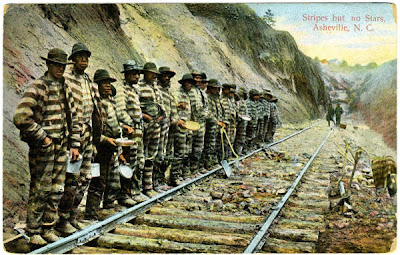 
History get trapped in the narratives we apply to it. Take what happened in Jackson County on December 30, 1882. Nineteen convict laborers working on the Western North Carolina Railroad’s Cowee Tunnel drowned when their barge capsized in the Tuckasegee River below Dillsboro.

These days, riders on the Great Smoky Mountains Railroad might learn that bit of local lore...and this: "The workers were buried in the hill above the tunnel and their tears still fall from the roof of the tunnel as you ride through."

But there’s another angle.

The workers were prisoners supplied by the state to complete the Western North Carolina Railroad to Asheville and, eventually, Murphy. It’s not much of a stretch to say the convict labor system in the last quarter of the 19th century was a reincarnation of slavery - with certain advantages over the prior system.

In the words of an attendee at the convention of the National Prison Association in 1883:

Before the war, we owned the negroes. If a man had a good nigger, he could afford to keep him; if he was sick, get a doctor. He might even put gold plugs in his teeth. But these convicts, we don’t own ‘em. One dies, get another.

Cheap labor was essential for powerful interests to maintain their economic and racial supremacy. As former slaves and their descendants were sent to prison, often serving harsh sentences for minor offenses, the state faced the problem of what to do with a large group of men and women.

Besides the Civil War, the biggest news story in WNC from the 1840s though the 1880s was the development of the railroad. The war crippled efforts to extend rail lines beyond the Blue Ridge.

At the same time, the state struggled for funds to build a penitentiary sufficient to house the expanding prison population. As early as 1872, the General Assembly authorized farming out prisoners to railroad companies and other public corporations.

When Buncombe’s Zeb Vance returned as governor in 1877, he requested the entire available prison labor force be sent to work on the railroad. 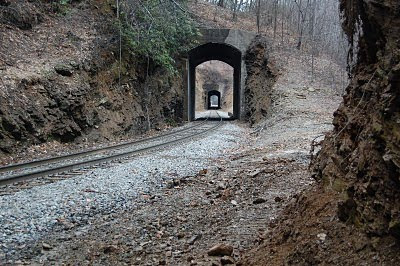 Soon, hundreds of convicts were building the railroad up Old Fort Mountain. Incredibly, the first locomotive to cross the Blue Ridge didn’t do so under its own power. Impatient railroad office like James Wilson ordered crews to chip away at the challenging Swannanoa Tunnel from both the eastern and western approaches, which required transport of a steam engine to the west side…prior to completion of the tunnel.

As reported in a Salisbury newspaper, November 1877:

“We went up last week to see Wilson’s niggers pull that engine over the Blue Ridge—and they did it.”

The convict crew laid temporary track on the old stagecoach road, pulled the 17-ton locomotive a few feet up the mountain with ropes, removed track from behind the engine, laid it in front, and repeated the procedure over and over and over for hundreds, if not thousands, of feet.

The mortality rate for prisoners on contract was about 10% from all causes. On-the-job deaths were common. Daylight shone through the Swannanoa Tunnel on March 11, 1879 when the eastern and western approaches finally met. On that same day, according to some reports, twenty convicts and a guard were killed by a cave-in at the tunnel.

Getting back to Cowee Tunnel is going to take a while. I already posted this in March, it’s not too soon to hear Bascom Lamar Lunsford’s Swannanoa Tunnel:


For this railroad expedition through the mountains, an explanation is in order. I was reminded of the Western North Carolina Railroad while listening to a talk by Robert Perkinson, author of Texas Tough: The Rise of America's Prison Empire.

Normally, I wouldn’t have much interest in this subject, but Perkinson’s perspective raises many weighty issues, deserving of serious consideration. His book talk and Q&A session is online at:
http://www.booktv.org/Watch/11452/Texas+Tough+The+Rise+of+Americas+Prison+Empire.aspx
From the program notes:

Robert Perkinson, American studies professor at the University of Hawaii at Manoa, presents a history of America's prison system and examines its roots in Texas. He details two different ideologies that took form during the development of the American penal system. The North's interest in rehabilitation and the South's belief in retribution and profit. The author relays that the Southern ideology became the template for today's American prison system.

And from a blurb for the book:

... a history of imprisonment, race, and politics from slavery to the present, with an emphasis on Texas, the most locked-down state in the nation. Sweeping in scope and exhaustively researched, it tries to answer some of the most vexing questions of our time: Why has the United States built the largest prison system in the world, unlike anything in the history of democratic governance, and why have racial disparities in criminal justice worsened over the past two generations, despite the landmark victories of the civil rights movement?
http://texastough.com/aboutbook/ 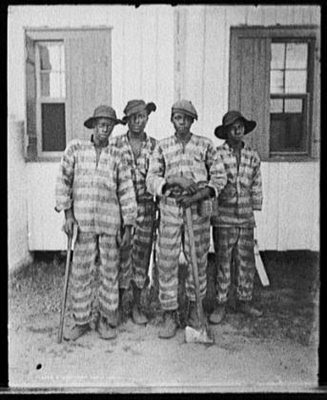 A century ago (1907) social reformer Clarissa Olds Keeler explored many of the same issues in THE CRIME OF CRIMES OR THE CONVICT SYSTEM UNMASKED. From the book:

Prisons were few in the Southern States and as the number of both white and colored prisoners increased, one State after another adopted the plan of hiring out the labor of the convicts until twelve of the States had adopted what is known as the convict lease system. What was apparently designed to be a "savor of life unto life" proved to be a "savor of death unto death" to thousands of convicts.

Southern men and Northern men, members of the United States Senate, Democrats and Republicans, who were leading politicians, members of State Legislatures, wealthy corporations, railroad contractors, and private individuals saw the advantage of obtaining cheap labor and seized the opportunity of coining money out of crime. Millions have flowed into the pockets of lessees, but much of it has been the price of blood.

A correspondent writing from Buncome county, North Carolina, to the Ashville Gazette under date of March 15, 1903, says:

"Where are we at, and where is the society for the prevention of cruelty to animals, that they or the Christian world have never heard the cries from the poor, unfortunate prisoner in the 'buck,' 'Lord have mercy, Captain!' (overseer) and the ringing of the cruel blood stained lash? I have seen white men beaten until their persons were blue, and blood oozing from the Captain's hands in the Buncome chain-gang."

The writer condemns the discrimination made between the rich and the poor, the latter being unable to pay fine and cost of trial he "is sent to the road prison and in servitude pays for his crime, which is but a misdemeanor, and there the lash is administered on the naked back, contrary to the spirit of the constitution in abolishing imprisonment for debt, and the lash at the whipping post."

Another correspondent writing from the same county complains of the "deplorable state of affairs" and tells of the insane, blind, deaf and aged, some of whom are in jails who should not be there.

excuse my wanderings - the comment I sent to the earlier post included reflections on the powerful images on this post as well.
Thank you for this. I am somehow reminded of an old Blues -
If I had Possession Over Judgement day