A New Tower on Mount Mitchell

I had not been to Mount Mitchell since the completion of the new observation tower. The mountain was as pretty as I've ever seen it. The turtleheads were blooming pink under the spruce and fir, surrounded by ferns and white flowers. 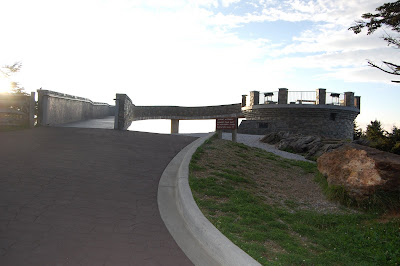 I wasn't sure what to expect, although I had seen renderings and photos of the new tower. My first impression was positive. Though not as high as the old tower, it seems to provide a more sweeping view of the surroundings. 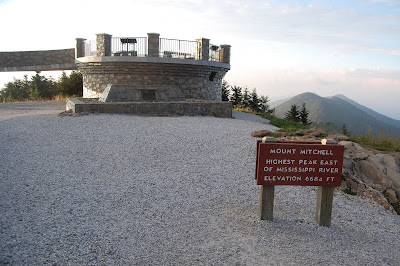 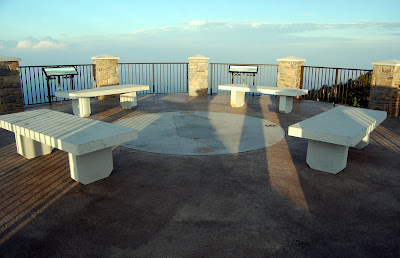 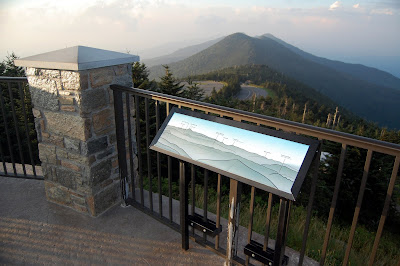 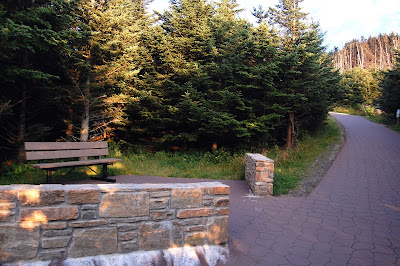 The newly improved trail to the summit. 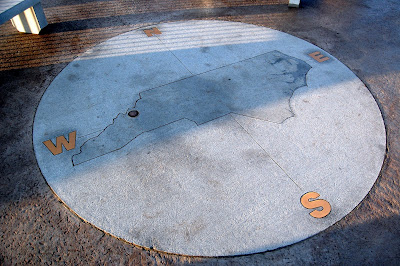 NC Map on the observation deck. 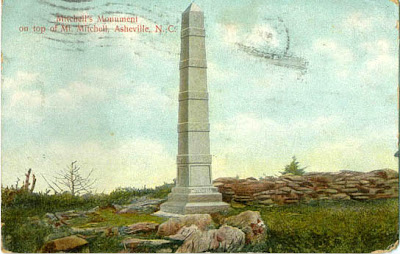 After a long trip up the Parkway from Asheville, I was ready for the short walk to the observation tower on Mount Mitchell, elevation 6684'. But a sign at the botton of the trail said "CLOSED". The old tower on the summit was gone!

That started me thinking about the various structures that have stood atop the mountain.

In 1835, Dr. Elisha Mitchell became the first person to measure the mountain, the tallest peak in the United States. He made several return visits and fell to his death while exploring the mountain in 1857.

In 1888, a 12-foot-tall monument marked the grave of Dr. Mitchell, who had been buried on the mountain bearing his name. 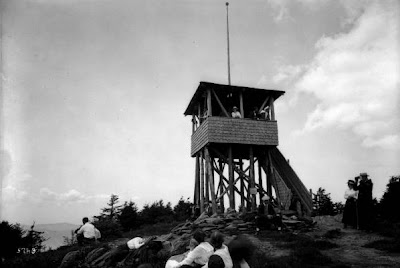 In 1926, a stone tower of a medieval design was constructed atop Mount Mitchell. 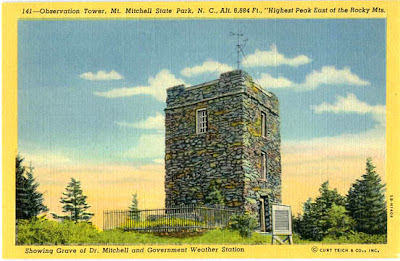 In 1959, it was replaced by the 30-foot-tall tower that was demolished last year. Engineers had determined that the 1959 tower was structurally unsound. 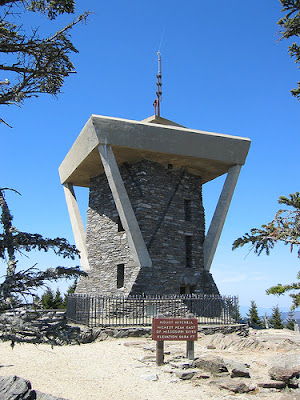 A tower now under construction will be 10 feet tall and 36.5 feet in diameter, with a curved and gently sloping ramp for access. The 135-foot ramp, supported by circular columns will make the platform fully accessible. 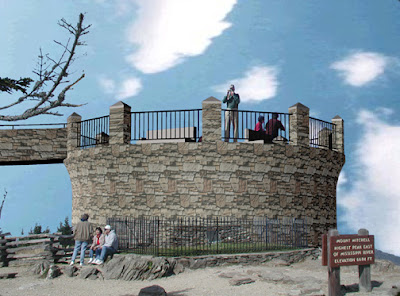 In addition to the architect’s rendering of the new tower shown here, is a photo of the actual construction as of July 2007. For more, you can click on the Vaughan and Melton website for photos of the Mount Mitchell tower as construction proceeds. 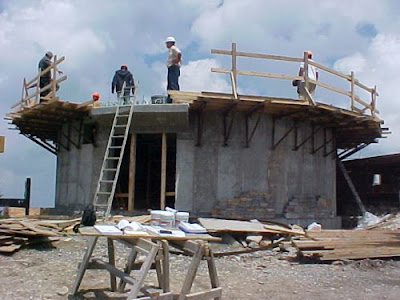 Charles Dudley Warner visited Mount Mitchell in September of 1885, before any markers or towers were built upon the mountaintop, and here’s what he saw:

In the center of the stony plot on the summit lie the remains of Mitchell. To dig a grave in the rock was impracticable, but the loose stones were scooped away to the depth of a foot or so, the body was deposited, and the stones were replaced over it. It was the original intention to erect a monument, but the enterprise of the projectors of this royal entombment failed at that point. The grave is surrounded by a low wall of loose stones, to which each visitor adds one, and in the course of ages the cairn may grow to a good size.

The explorer lies there without name or headstone to mark his awful resting-place. The mountain is his monument. He is alone with its majesty. He is there in the clouds, in the tempests, where the lightnings play, and thunders leap, amid the elemental tumult, in the 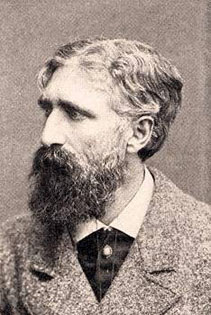 occasional great calm and silence and the pale sunlight. It is the most majestic, the most lonesome grave on earth.

As we sat there, awed a little by this presence, the clouds were gathering from various quarters and drifting towards us. We could watch the process of thunder-storms and the manufacture of tempests. I have often noticed on other high mountains how the clouds, forming like genii released from the earth, mount into the upper air, and in masses of torn fragments of mist hurry across the sky as to a rendezvous of witches.

This was a different display. These clouds came slowly sailing from the distant horizon, like ships on an aerial voyage. Some were below us, some on our level; they were all in well-defined, distinct masses, molten silver on deck, below trailing rain, and attended on earth by gigantic shadows that moved with them. This strange fleet of battle-ships, drifted by the shifting currents, was maneuvering for an engagement.

One after another, as they came into range about our peak of observation, they opened fire. Sharp flashes of lightning darted from one to the other; a jet of flame from one leaped across the interval and was buried in the bosom of its adversary; and at every discharge the boom of great guns echoed through the mountains.

It was something more than a royal salute to the tomb of the mortal at our feet, for the masses of cloud were rent in the fray, at every discharge the rain was precipitated in increasing torrents, and soon the vast hulks were trailing torn fragments and wreaths of mist, like the shot-away shrouds and sails of ships in battle. Gradually, from this long-range practice with single guns and exchange of broadsides, they drifted into closer conflict, rushed together, and we lost sight of the individual combatants in the general tumult of this aerial war.
Posted by GULAHIYI at 12:01 AM